As technology continues to advance at lightning speed in the 21st century, nearly a billion people live in slums, with that number expected to increase to 2 billion by 2030.

Could 3D concrete printers provide solid shelter for the world’s poorest and most vulnerable?

The world’s largest concentrations of slums exist in the “global south:” Africa, Asia, and Latin America; places where urbanization has not led to economic development, and are characterized by poor sanitation, crowded living conditions, low quality structures, and populations vulnerable to disease and natural disasters.

Slums are “a problem of conventional construction, which is slow, labor intensive and inefficient,” Professor Behrokh Khoshnevis of the University of Southern California said in an MSN Innovation article

Khoshnevis invented Contour Crafting technology, which uses a giant gantry-like robotic 3D printer to print concrete. The system can build a 2,500 square foot house in 24 hours by following a computer design, and the result is more robust than conventionally constructed homes. 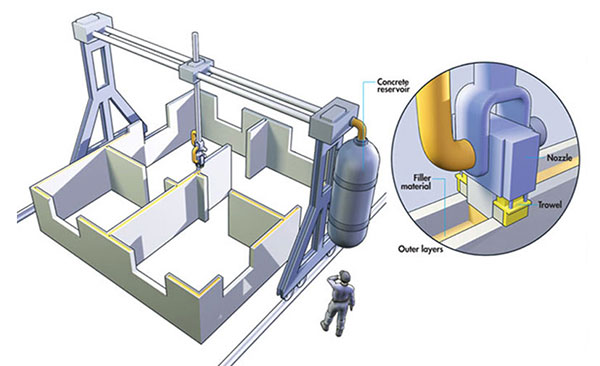 Most goods—clothes, cars, and appliances— are produced using automation, Khoshnevis points out. Homebuilding is the next frontier.

In the article, Khoshnevis says the new technology has the potential to generate plenty of new jobs, and ones that are far safer, given that over 10,000 people are killed every year on constructions sites.

Like any truly game-changing technology, 3D homebuilding is likely to disrupt established economic systems. After all, Khoshnevis points out, most Americans were farmers at the beginning of the last century, and today, hardly any are.

There are some downsides. Building sites must be meticulously cleared and leveled for 3D printers to work. In many of the world’s slums, such as the favelas of Brazil, flat land is in short supply. Building pad grading is not likely to be an automated process, so some manual labor jobs would likely to continue to be required.

So far, no houses have been built and the system continues to be tested. But with new 3D printer technology being developed and  released all of the time, and more and more products being printed, it’s likely only a matter of funding and time. 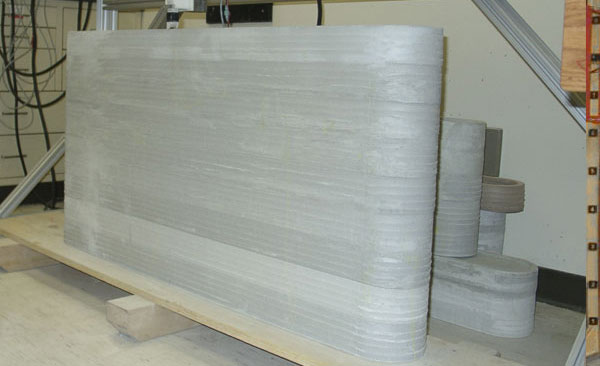 This Contour Crafting test wall has a strengt of 10,000 PSI (pounds per square inch) compared to an average of 3,000 PSI for conventional constructed wall.