The Park and The Protests - Shareable
Skip to content 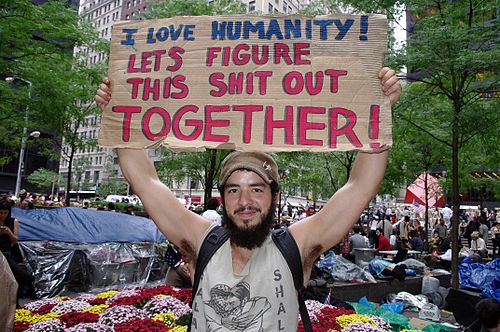 It’s Tuesday, September 27, at 2:00 PM, and another general assembly is beginning here in Zuccotti Park, a small park at the corner of Broadway and Liberty in Manhattan’s financial district, two blocks from the World Trade Center site, three blocks from Wall Street. Zucotti, renamed "Liberty Plaza" by its occupiers, has been held as a home base by protesters for ten days. This, in itself, is a kind of achievment. In the General Assemblies leading up to the September 17th day of protest that culminated in the occupation, organizers hoped that the occupation would last days, weeks, perhaps even months, but no one could guarantee it would make it six hours. Yet hundreds are here, on day ten, holding another open discussion of tactics, infrastructure and politics. Even five days ago this wasn’t a foregone conclusion.

Rain over the week saw dwindling numbers, though there were never fewer than 100 people in the square, and media coverage had been either dismissive or outright malicious. Police pressed with random arrests and threats of eviction. Still, numbers surged over the weekend, and people gathered for a huge street-taking march on Saturday. Saturday’s march, with numbers somewhere between 700-1000, was met with dramatic police brutality and mass arrests, the largest mass arrests in New York City since the RNC protests in 2004. Videos of police throwing protesters to the ground and pepper spraying women from close range spread widely across the internet, and has led to an explosion in numbers here and a shift in the tenor of news coverage.

Inspired by the methods of Arab Spring, and the protest movements in Israel, Greece and Spain, protesters from New York City and the rest of the country (I spoke with one man who had come all the way from Alaska) have built an encampment of sorts- so far tents and structures have been taken down by the police, and so people have slept out in sleeping bags. Police presence and instruction has, thus far, been a major problem: Zuccotti is surrounded by cops without and crawling with them within: blue shirts and lieutenants walk freely through the square, and protesters foolishly follow the rules set out by the police. I’ve watched plainclothes enter the square, pump protesters for information, and then walk straight back out to talk to their superiors. TARU, NYPD’s intelligence unit, has been constantly on the scene, and I can only guess at the number (tens?) of undercovers. NYPD is using OccupyWallStreet as an intelligence gathering bonanza, and if, as I believe, Zuccotti is the beginning of a serious movement here in NYC, we’re giving the cops everything they need to know: who is friends with who and who has sway and organizational ability. That is a serious tactical problem that protesters have yet to address. Still, numbers are growing everyday, and are buoyed by appearances in the General Assembly of Michael Moore, Cornel West, Susan Sarandon, Lupe Fiasco, and Immortal Technique. Rumors have even been percolating that Radiohead might come to Zuccotti Park on Friday for an impromptu show. 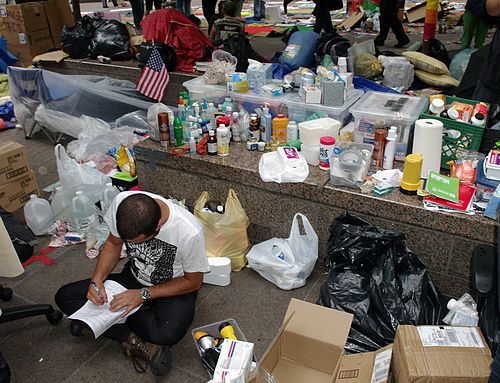 As the General Assembly grows, major meetings with everyone in the square become unweildy and incredibly difficult. There is a need to shift decision making to smaller groups and it would be great to see a focus on neighborhood organization: General Assemblies in the burroughs would be an incredible achievement. As with the movements in Spain and Greece, occupiers have eschewed simple demands or sound-bite messaging. As elsewhere, there is no official representative body which speaks for the protesters, no centralized or formally heirarchichal power structures. The lack of a clear, easily reguritated message tends to enrage both the media and the traditional and professional left, but the demandless occupation is not a reflection of stupidity, political impotence or idealistic naivete, as many within and without the protests have claimed. Such claims only reveal the impotence and poor analysis of their makers.

On February 15, 2003, the largest protest in the history of mankind was organized and carried out. Between ten and thirty million people participated globally, with around five hundred thousand protesters in New York City alone, all around an incredibly simple demand: don’t go to war in Iraq. 33 days later, ‘combat operations’ began. The demand couldn’t have been clearer. Eight years on, dozens of Iraqis die in bombings every day. And what about Vietnam? Ten years of escalating protest, and the movement shattered itself, exhausted, against an implacable imperial war machine. The unifying demand, the end to the Vietnam War, gave meaning and direction to the protests and helped build the solidarity of the student movement, but when the demand itself was met, and the Vietnam War ended, the movement splintered into a thousand pieces. And it was not some innocent failure of well intentioned people: in the antiwar movement’s collapse, the black community was betrayed and abandoned by the majority of their white ‘comrades.’ Their leaders murdered or jailed, the radical black movement was abandoned by a white middle-class Left fleeing the fight like American diplomats helicoptering out of Saigon. Many of these hippies, radicals and student protesters of Vietnam went on to become the very parents, bosses, landlords and teachers who have helped destroy this planet with abject consumption, raise the price of universities only to make a degree worthless, ‘globalize’ financial capital so that wage slavery and precarity reaches every corner of the globe, etc etc. These same ex-hippies make up much of the professional left and media commentatoriat who tell us we need one clear demand.

When we look around us, we see a world that is burning, a planet being consumed by capital, an economic system which thrives on the production of human suffering, mass imprisonment, violence, economic strife. We see a world that cannot be fixed by the same people who brought us here, with the same methods, ideologies and processes. And we see that we are not going to win the fight tomorrow. But we want to win. We’re going to win. So we do what we can. We take a space, we build our resolve and our numbers. With everyday that we hold the square, we chip away at our fear, at our confusion, at our alienation. We improvise new ways of living, new relations, new forms of solidarity. We create. We meet eachother. We share food, sleeping space, music and drink. We fight the cops together. We talk about what a new and better world would look like, and we try, to the best of our abilities, to build it. And, as we discuss our ideas and principles in Liberty Plaza, it becomes clear that, though we may have different focuses, different politics, though different goals brought us all here, we can only achieve them together. We are preparing ourselves for the fight ahead, because we have been left futureless by a group of people who insist we ask them to solve the problem, so they can refuse us. We don’t make one simple demand because this isn’t for the media to turn into sound bites, for politicians to aggrandize or argue against, for bankers to gamble on and academics to study. We’re not asking the people in power for permission, we’re teaching ourselves how to take what we need and make a better world without them.