Skip Grad School and Make Your Thing: An Interview With Kio Stark - Shareable
Skip to content 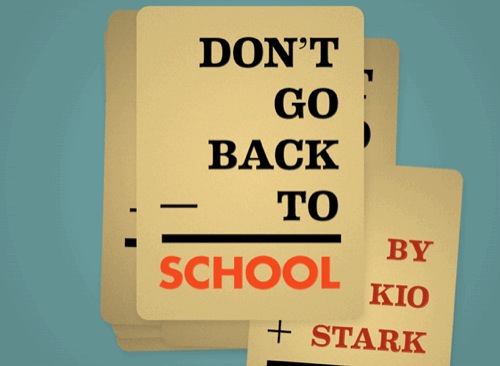 For college graduates in their 20’s or 30’s facing few job prospects and excessive student debt, graduate school can seem a promising way to sit out the recession. It’s far from a sure bet, though: there’s no guarantee of future employment, it only adds to the mounting debt post-undergrads face, and it consumes time and resources that could be better devoted to making things. But there are alternatives. Don’t Go Back To School is a project by author, NYU instructor, and Yale graduate school dropout Kio Stark exploring other ways to facilitate post-undergrad learning. Stark recently launched a Kickstarter campaign to fund the “handbook for independent learning that shows you how to learn almost anything without school,” which will include interviews with autodidacts such as Cory Doctorow, Dan Sinker, and Quinn Norton about how they learned a wide variety of subjects including programming, writing, design, art, engineering, business, languages, and much more. Stark recently spoke with Shareable about leaving Yale, the role and purpose of grad school, and the politics of practicalities.

What prompted your decision to leave the grad program at Yale?

I went straight to grad school after undergrad because I didn’t feel done learning, and I was lucky enough to get a fellowship. While I was there, I figured out something that in my naïvete I hadn’t known: grad school is professional school to be a professor. And I wasn’t at all sure I wanted to be one. Still, I got quite far along and then while writing my dissertation, I ran up against some resistance from my advisor about the way I was writing it, which was very narrative. I was either going to have to start over, or walk away. I’ve never looked back.

What was the genesis of Don’t Go Back to School?

For a long time, I’ve had a lot of people wanting my advice about whether or not to go back to school. This is mostly a question of grad school, extra degrees. About a year ago, I had the conversation a dozen times in the space of a month, and in every case, because of the way each person talked about what they wanted out of it, I advised them not to go. I decided to start working on a pamphlet about independent learning. I wanted to analyze the structural things you get from school and then talk to a bunch of people about how they filled those needs without attending an institution. For me, the part of grad school that was the most significant learning experience was really an independent learning project, which was reading for my comprehensive exams. I constructed reading lists in 4 fields and read about 200 books, in order to be able to demonstrate professional competence in those fields. I did meet with advisors a few times along the way, but it was mostly teaching myself, and the methods I used have been the way I teach myself things ever since. So I wanted to get all of that down and have something concrete and useful to share with the people who I was telling that they didn’t need school.

With the current economic downturn and unemployment rates for folks in their 20’s, there’s a lot of debate over the value of higher education given the cost. How do you see Don’t Go Back to School contributing to that conversation?

The conversation about the economic value of college degrees is very complicated. College education in American culture has traditionally been the gateway to being middle class, both culturally and financially. Right now, the need for an undergrad degree in order to get certain kinds of desirable jobs is still hard to get around, even though those jobs are less plentiful, and they don’t necessarily pay well enough to pay off one’s loans. These are large structural, economic, and cultural questions, and things need to change from all directions, including that hiring practices may need to become more creative and flexible.

Beyond economic value, college is in theory supposed to produce a broadly educated, intelligent citizenry. That’s a social good. Whether or not college is doing that, and whether or not college is the best way to do that, are hotly contested territory. A college education can be wonderful experience, but economically it’s an indulgence for a lot of Americans. If we had a culture of self-educators and the infrastructure to support that, we could have the same social benefit of citizens who know how to think and have a decent base of basic knowledge. That’s the utopia I want to live in.

All that said, my goals are fairly modest. I’m primarily tackling the issue of graduate school. The learning techniques in the book will be useful to any independent learner, but I’m not offering this as a way to revolutionize the higher education system. This is the politics of practicalities. I recognize that currently, a lot of the self-education resources out there—like open courseware—are dependent on the continued existence of higher education as we have it now.

Why did you choose to publish this as a book, rather than a collection of video interviews or series of blog posts?

That’s a great question. Primarily, I think, because I’m a writer, and that was my first instinct! If I was a documentarian, this would have made a really interesting video series. Blog posts are great, but to my mind, a book is a wonderful object that has totemic value. Having a guidebook for how to do something, that you’re holding in your hands, it just has more symbolic weight. Even if it’s on a Kindle, it’s still a thing you hold. It’s on your shelf, reminding you of what you can do. This may be turn out to be generational, this way of feeling about books as objects. I hope not.

How would you respond to non-specialists considering grad school who feel that they must attend to improve their future career prospects?

I think it really depends on the subject area, and to some degree the person’s own moxie. There are protected title professions that require a degree, or sometimes a degree and a license, and so there’s no real way around that. Doctor, public school teacher, pharmacist, nurse, architect, things like that. Lawyers too, although in 13 states you can read law and be admitted to the bar without attending law school. Besides those types of jobs, there’s always a way to get where you want to be without the degree. I’m trying to interview people who have done that. So, I’m talking to successful people without MBAs and MFAs, for example, and finding out how they did it, what the challenges were, and what their workarounds were. I’ve also talked to people who DO have those degrees to find out what was most important for their career about their school experience.

Can you expand on the research you’ve done into how people learn and the importance of engagement—what was your methodology? Who did you study? What are some of the most useful strategies that people use to learn what they’d otherwise get at school?

Well, this is all still underway. It’s qualitative research, which means it’s based on people’s stories about themselves. I started out interviewing people I knew, and then put out a call in multiple places to widen the range of people I was collecting data on. The thing that I’ve found most interesting has been the need that most people have for some kind of learning community. It’s not for motivation so much as it is for feedback, for people to ask questions and discuss things with. It turns out that learning is a very social endeavor for many people.

Why did you choose to crowdfund this project, rather than shop it to a publishing house or fund it yourself?

The timelines with big publishers are incredibly slow. It would likely have been at least 2 years before this would have come out, and there’s so much energy around this issue right now. So, part of it was wanting to get it out there fast. Traditional publishing is also in a messy place, and I was eager to experiment with other ways of getting words out into the world, and this seemed like a perfect sort of project to crowdfund.

That said, there are things about doing this myself that feel less-than-ideal; for example, not having an editor to work with. So that’s one of the things I’d like to do if the project happened to get overfunded, is hire an editor. Books that have more than one brain contributing to their structure and expression are better.

What are your plans for releasing the book? How do you plan to promote and distribute it?

After the Kickstarter edition, we’ll see how it goes. I’ve had a few offers to help with that, and I’m open to ideas!

Have you considered releasing it under a Creative Commons license?

Yes, I plan to release the book CC in some form, a few months after the Kickstarter backers get their digital and physical copies. I’m a big supporter of all experiments that let people pay what they can afford to for culture. I wrote about it a while ago. I think of CC as a part of that movement.

Who is your ideal audience for Don’t Go Back to School?

The initial idea was a guide for people who have been to college who are thinking about further schooling, and people who want to change careers and think they need extra training. There are practical hurdles for people who are bypassing college altogether that I’m not trying to solve in this book, although many of the people I’m interviewing never finished college at all. The things you’ll learn about learning from the book will apply to anyone who wants to teach themselves, and the individual stories are inspiring whatever level of learning you’re at.