The History of Carpooling, from Jitneys to Ridesharing - Shareable
Skip to content 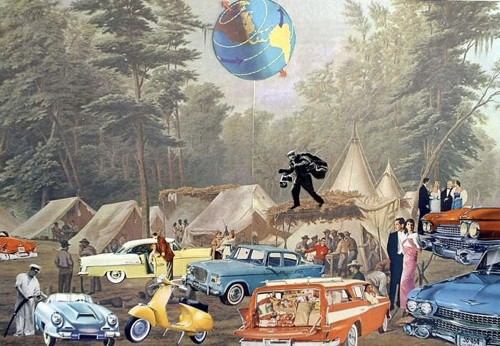 The word “carpooling” usually conjures images from the 1970s: service stations warning “No Gas,” lines at the pump, and bell-bottom pants. For many people, carpooling brings to mind quaint notions of penny-pinching habits that went out of style along with turning the thermostat down.

But the history of carpooling goes back almost as far as the invention of the automobile itself, and has endured well-beyond its heyday in the late 70s, according to a publication by MIT’s Rideshare Research.

[image_1_small_right]Ridesharing began shortly after the introduction of the Model-T, America’s first automobile priced with for the middle-class. By the end of 1914, the US had fallen into a recession at the same time it was seeing a flood of cheap new automobiles on city streets. In San Francisco, enterprising car owners began offering seats in their cars for the same price as a street car fair, known as a jitney. Within nine months, the “jitney” craze had spread all the way to Maine.

But while the sudden explosion of carpooling demonstrated its enormous potential, it also gave rise to significant backlash as irate streetcar operators fought the new form of competition with the collusion of city and regional governments. Since then, ridesharing’s popularity has typically lived or died at the mercy of government policy. By 1918, new liability regulations succeeded in reducing ridesharing by 90% (Eckert & Hilton, 1972).

Ridesharing and carpooling remained at a low ebb until the federal government reversed tack during World War II. Facing the need to conserve resources for the war effort, the government worked alongside the oil industry to mount an $8 million ad campaign (roughly $100 million in today’s dollars) to push drivers to take passengers along when they drive through so-called “car clubs” (US PAW, 1946). It is this ad campaign that is responsible for the famous “When you ride alone, you ride with Hitler” poster.

Interestingly, carpooling was promoted in cooperation with oil and car companies, (Amey, 2010). The partnership between private industry and the government, along with the substantial ad campaign and sense of national emergency, proved extremely effective in changing consumer habits.

Participation in carpooling again died down as resource conservation was deemphasized in the post-war boom. But government support picked up again in 1974 after the Oil Embargo when President Nixon signed the Emergency Highway Energy Conservation Act, in which the federal government provided funding for ridesharing initiatives.

President Carter would follow Nixon’s lead in supporting carpooling, including the creation of the National Task Force on Ridesharing and attempts to slash parking subsidies that encourage the overuse of single occupancy vehicles [PDF]. Ridesharing was also promoted as a way to reduce local air pollution and saw the establishment of the first regional carpool services.

All of which served to help make the late 1970s one of the most active eras in the history of ridesharing. According to the Census Bureau, by 1980 roughly 23.5% of Americans were carpooling, compared with 11% in 2011. Participation again declined as the price of oil fell precipitously in the 1980s, disposable incomes rose, and government support disappeared.

We are now seeing a renaissance in ridesharing activity, although for the first time since the jitney craze this is occurring in the absence of support from the government, major automobile manufactures, or oil companies. Commuters in the Washington DC area are joining “slug-lines”: impromptu carpools created between strangers to share the cost of tolls and gas and to gain access to the faster carpool lanes.

According to Amey, the rapid rise in oil prices since 2005 combined with the decline in disposable incomes as a result of the financial crisis of 2008, has been sufficient to generate renewed interest in the practice in spite of a lack of support from the government.

Entrepreneurs are now stepping into the gap. Several new websites, Amovens among them, are making use of social networking technology to allow individuals to find ridesharing partners much more conveniently than in prior years.

The advent of smartphones, which are almost always at hand and maintain a constant connection to the internet, are allowing start-ups to provide smartphone apps that connect drivers with passengers on the fly at a moment’s notice. The additional flexibility provided by modern information technology is making carpooling more viable than ever before.

What will happen in the future is anyone’s guess, but the trends we’re observing suggest that carpooling will continue to grow in popularity. As of February 2012, crude is trading at over $100 a barrel and is only expected to rise as growing middle classes in developing countries are putting an even greater strain on our finite and already depleted supply of fossil fuels. US disposable incomes remain below where they were four years ago. Governments are finally beginning to tackle the problem of climate change, and are likely to use a combination of carrots and sticks to attempt to limit the growth in fossil fuel consumption.

Although we are not seeing the support from big business and the federal government that normally accompany carpooling booms, the combination of economic recession, rising oil prices, and technological advancement may be enough to usher in a new era in carpooling on their own. Though interest has typically risen and fallen depending on government policy, the fact that it is once again surging despite the lack of institutional support suggest the practice may now be here to stay.

Jef is the director of US operations for Amovens, an online carpooling platform. Previously, Jef was an editor with the Financial Times group and LatinFinance, covering financial services

Jef is the director of US operations for Amovens, an online carpooling platform. Previously, Jef was an editor with the Financial Times group and LatinFinance, covering financial services and Latin America, and worked for JPMorgan Partners. He has written extensively on environmental themes.