“Common sense” is a term Reginaldo Haslett-Marroquin repeatedly uses—with ever increasing enthusiasm—to describe the Hillside Farmers Cooperative he is creating with Latino farmers in southern Minnesota. Sometimes he pronounces it, “commons sense.”

“I come from the commons,” declares Haslett-Marroquin, who grew up in Guatemala, where his family still farms communal lands, “and I am going back to the commons. The whole idea about the commons is so entrenched in what we are doing.”

Since 2007, he has been director of Rural Enterprise Center in Northfield, a town 30 miles south of the Twin Cities with 17,000 residents. Like many small Midwestern communities, Northfield has attracted growing numbers of Latin American immigrants. Typically they work in low-paying farm labor and factory jobs, struggling to make their way and unable to take advantage of the skills they brought with them. 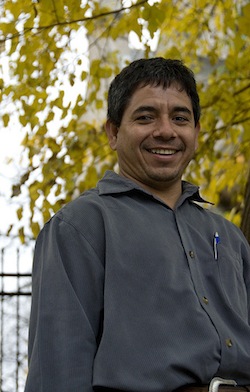 But where many see a problem, Haslett-Marroquin (better known as “Regi,” pictured left) sees an opportunity that can benefit both the immigrants and the community as a whole. That's where “commons sense" comes in.

Regi, his American-born wife and their kids moved to Northfield three years ago after ten years in Minneapolis, where he earned a degree in International Business Management and partnered with the Institute for Agriculture and Trade Policy to launch a leading fair trade import company, Peace Coffee.

“We were looking for a piece of farm land with space for sheep, goats, a cow, maybe a horse and plenty of space for vegetables, trees and hazelnut bushes,” he explains—a dream close to what many other newcomers from rural Latin America are seeking.

The idea for the Hillside Farmers Cooperative was born when Haslett-Marroquin realized that many people around Northfield were unable to find or afford healthy, local food at the same time as new immigrants lacked the financial means to capitalize on their experience as sustainable small farmers. Even some farm owners were frustrated that their only chance for staying in business was to subcontract with large agribusiness corporations that did not respect the land or the agrarian traditions that had been part of their families for generations.

The solution was obvious. Link the landowners with the prospective small farmers and then create a way to connect with consumers seeking healthier local food, which is exactly what Haslett-Marroquin is doing with the help of the the Main Street Project. He’s calculated that with four acres, a family can support itself raising free range poultry.

“The project took a long time to put together, plan, secure resources etc., but we now have plots,” where three immigrant families are raising free range, naturally-grown chickens and two families are growing vegetables.

It’s a small start, but the coop is already laying plans to expand to 8 counties over the next several years. They’ve already started selling free range poultry, and Hasslett-Marroquin is investigating how to make sure the processing and distribution of the food remains sustainable, with the benefits going to the farmers and local community, not big outside companies. 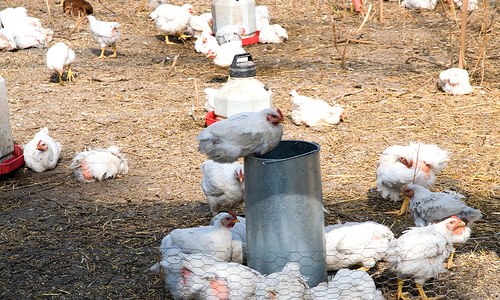 He envisions the co-op eventually spreading across 38 counties in southern Minnesota. “At that scale we can show that a common-sense structure is possible in the agricultural sector. We can offer it as a model for every community in the country that is interested in a food production system that doesn’t deplete the land, and doesn’t deplete the people that work the land.”

Hasslett-Marroquin is undaunted by those who charge that these plans are a naïve attempt to turn back the hands of time. “If something works for the common good,” he answers, “the corporations see that they can’t make any money off it. So they try to say it’s ‘old-fashioned’ or to devalue it.”

This small farmer co-op is a shining example of an emerging idea known as “commons-based development”—a strategy that strengthens the commons by making sure that economic expansion projects helps the community as a whole.

While commons work is more often seen as an activist or community cause than a development model, Hasslett-Marroquin’s projects fulfills many of the fundamental commons principles: a commitment to future generations, a focus on sustaining the earth, and a means of providing a benefit to everyone.

As Regi Hasslett-Marroquin says, “the commons is very straight forward common sense approach to creating systems that sustain society and sustain life on the planet.”

Originally published in On the Commons, a Shareable.net content partner.