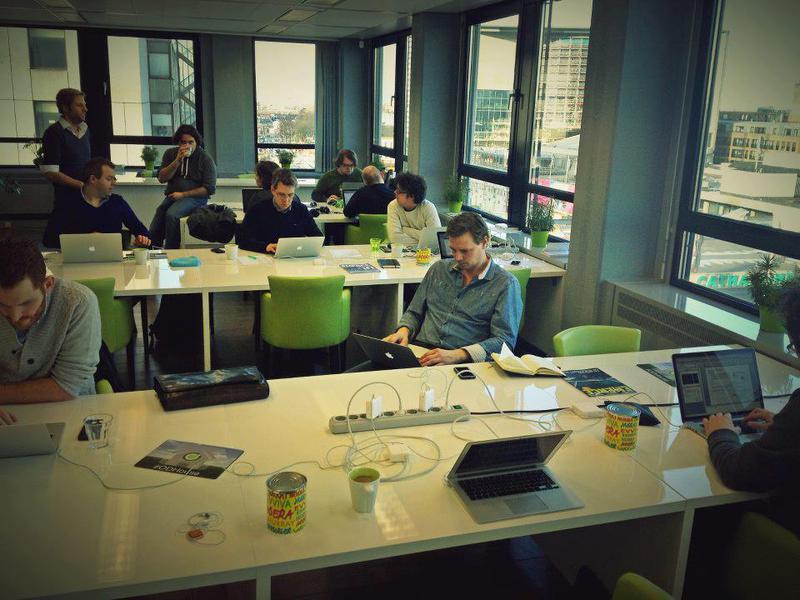 Sign into the online Seats2meet interface, list your skills and talents, take a seat in one of the 61 physical spaces at the reserved time, connect with a network of hundreds of by-chance coworkers doing the same as you, then sign out at the end of your reserved time.

In a James Bond kind of a way, it’s like you never came at all. Except for the magic that may have happened in that window of time. Like maybe you found an editor for your book, or a designer for your latest project, or picked up a much-needed freelance gig.

That is kind of what it’s like to use Seats2meet (S2M), an innovative take on coworking—free coworking, mind you—that is spreading like wildfire across the Netherlands and beyond.

Founded by Ronald van den Hoff and Marielle Sijgers, S2M takes the already serendipitous networking of traditional coworking and shakes it up to a whole new expansive level. It’s free coworking with a third, ever changing dimension, and it hints at an exciting possible future for coworking: an open-sourced global network.

Since it began in the Netherlands in 2005 with just ten people, S2M swelled to 250 users within the first month, and it’s been growing exponentially ever since.

Last year, a total of 15,000 people, or “knowmads” as van den Hoff calls the independent coworker, used S2M. The model now operates in 61 (and counting) different physical locations all over the Netherlands, as well as “The District” in Cairo, Egypt, and most recently, “League” in Tokyo, Japan.

The innovation begins here: S2M encompasses all kinds of physical spaces, not just average office spaces. The 61 spaces that are currently offering seats include some traditional coworking spaces, and also everything from a yogurt shop, to a golf course, to business centers, museums, a theater and even a hospital.

“So basically what we are saying is that you can create value in any physical place, as long as you are connected,” said van den Hoff.

Seats2Meets is the Freemium Model Applied to Physical Spaces. How it Works:

Van den Hoff hesitates to call S2M “free” (even though it is) because space owners make money on premium services and users “pay” with social capital.

Venues that participate offer 20% of their seating to S2M coworkers for free, but if a S2M user wants to hold a meeting or an event, then the spaces can charge for that. S2M receives a small commission (less than $2 per seat) on these rentals which keeps the S2M platform running.

So what, exactly, is this social capital that users pay with and which van den Hoff believes is “highly underrated,” yet extremely valuable?

It’s the rich pool of knowledge and skills that the knowmads have to offer to the network on a daily basis, and it’s what is keeping the network growing.

S2M users, a diverse bunch that ranges in age from 17 to over 60, are required to tell the S2M network who they are, and what their talents and knowledge are on that particular day. And then naturally, share it. That’s how users pay with social capital.

“A lot of people underestimate [social capital],” says van den Hoff. “But we see that a lot of the traditional corporations, they are booking the meeting rooms and the office spaces just to get in touch with those people.”

For van den Hoff, the knowmads that use S2M are a resource in and of themselves.

“These people are self learning, they are continuously developing themselves because if they’re not, they’re out of the game,” says van den Hoff. “And they’re highly connected, they’re more connected than your average corporate player.”

And do the golf courses and yogurt shops who offer seats get anything out of this?

“Yes, because the key thing is, the coworkers are highly connected people, so whenever they’re in our space they start communicating that they are in our space, and that means they start to advertise your location,” says van den Hoff.

“And people are saying ‘I’m going to Seats2meet in Amsterdam X and X location,’ and somebody else is saying ‘Seats2Meet, what is that?’ And then number three is saying ‘let me explain it to you.’ And number 4 is saying ‘here’s the link and you can reserve your seat.'”

It’s the reason that S2M is able to operate with just four full time employees—the knowmads—although still self-employed—naturally become ambassadors of S2M. They play the role of advertisers and customer service representatives. In the Netherlands, at least, the S2M logo is getting pretty hot—people want to be associated with the prestige of this network which is so rich in social capital.

And as often as entrepreneurs meet and chat within the virtual space of S2M, they are also inviting each other to have coffee (or yogurt) at the physical site. It’s a win-win relationship: The businesses that offer free seats enjoy a swell in business, and the knowmads are a valuable resource that attracts corporate players.

Next month, on request of the S2M community, a new service called “Residency” will be added, where coworkers can pay 50 euros per month to have access to the database of knowledge and people at all times, as well as free access to the last unsold seats at commercial conferences. These members will also be granted full access to the S2M software and they can use the logo as a badge on their business cards and websites.

“One of our key elements, what we have been looking at, is how do we connect those places, but more importantly, how do you connect all those people? Because that’s obviously where the serendipity takes place.”

The answer is in what van den Hoff calls the “virtual blanket”—the web interface of S2M, where workers reserve their physical seat in one of the locations, and list their skills, talents, and knowledge in realtime on the “dashboard.”

And while the users are a miscellaneous bunch—students, photographers, web designers, writers, consultants, government officials traveling through, etc—they are also not tied to one particular skill or identity: what they offer today might be something entirely different tomorrow.

“Today I might be working on a consultancy project, and tomorrow I might be writing a book,” says van den Hoff.

This fluidity may be part of why S2M is so appealing to freelancers and entrepreneurs who have their hands in several projects at once. It’s not like more conventional online networks like LinkedIn, where you tick a box that says ‘marketing’ or ‘sales,’ says van den Hoff.

“You live a much more dynamic life, and thats why that virtual realtime blanket is so important. You are moving from one project to another, you know, those things are dynamic.”

At any time, you can peruse the S2M dashboard and see who is working at the moment, and what their skills are—marked by the tags that they choose—or who will be working, say next Tuesday between noon and four.

Interestingly, while most professional interactions in today’s world pivot around convenience of location, or convenience of availability, van den Hoff has noticed that it’s not a favorite neighborhood or meeting place that determines where to meet, it’s who is at a particular space that influences the decision.

“If you look at the homepage of Seats2Meet, you still see the traditional reservation wizard on top of the page, where you can reserve your seat or your meeting room, but if you scroll down a bit, you can see the knowledge which is available in real time, and what we see is that people, more and more, are using that entrance to make their reservation,” says van den Hoff. 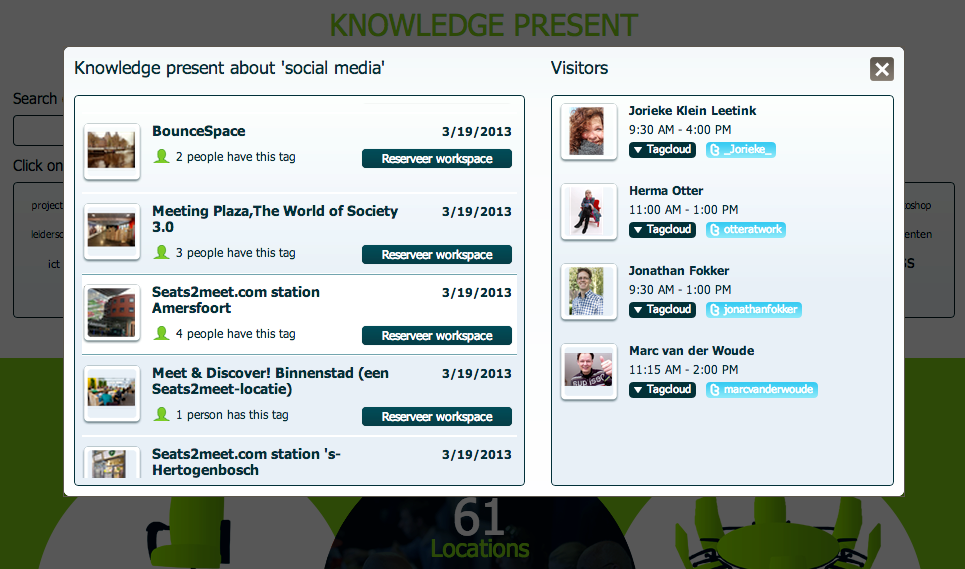 The Magic Happens in the Physical and Virtual Spaces

There is much to be said about the networking that happens in a physical coworking space, and the success it can bring to entrepreneurs.

“The first half year I went to S2M together with a friend. We sat at a big table, and so we met a lot of new people, just because you sit together and there are a lot of reasons to get into contact with somebody—’what are you working on?’ ‘do you want some coffee?’ ‘can I use your adapter?’ …We really had a lot of fun together. And during lunch, it is quite normal to ask ‘what kind of work do you do?’ It’s also normal to ask for help.”

Griend launched her self-published book HAPPY KIDS with the help of 150 people she met through S2M and Meeting Plaza.

Cees Hoogendijk, an organization developer, master in construction development, and developer an international social media site for communities, Mindz.com, is one of those knowmads that wears many hats. During his time using S2M, he became more acquainted with van den Hoff and his book, Society 3.0. “Lots of new relationships on my behalf start through Twitter. But how and why did I start to use Twitter? Because one S2M community manager told me to do so,” said Hoogendijk.

The Future of Coworking is Augmented

While the traditional coworking centers are definitely on to something by offering a space for independent workers to network, this virtual blanket might just be the future.

Van den Hoff uses the example of his 16-year-old daughter:

He also points out that to an extent, the traditional coworking center, with it’s average of a 100 to 150 members can become a “closed circle,” less likely to find resources beyond this immediate network.

The next step, as van den Hoff sees it, is to connect coworkers worldwide—and again, he’s much less interested in tapping into the membership fees of the coworking spaces as he is in creating a global network rich with social capital.

He’s even proposing a coworking currency.

“The next step basically of what we could do as coworkers worldwide is work together to create a kind of collaborative currency,” said van den Hoff. “Instead of using Euros, there could be a coworking currency unit, so we could do even more business with each other globally, you know, use a credit system or something. That would be my ultimate goal.”

And although the banks, naturally, are not thrilled with this proposal, he is talking with government officials in Holland about trying to set up a pilot project for a coworking currency to complete the circle.

After all, collaborative consumption is on the rise, and van den Hoff predicts that in the next five to ten years, it will make up 40% of the current economy.

When it comes to networks, he said, “The larger, the more connected we are, the better the whole system will work.”