Future of Work: Seats2Meet's Innovative Model for Freelancers to Connect and Collaborate - Shareable
Skip to content 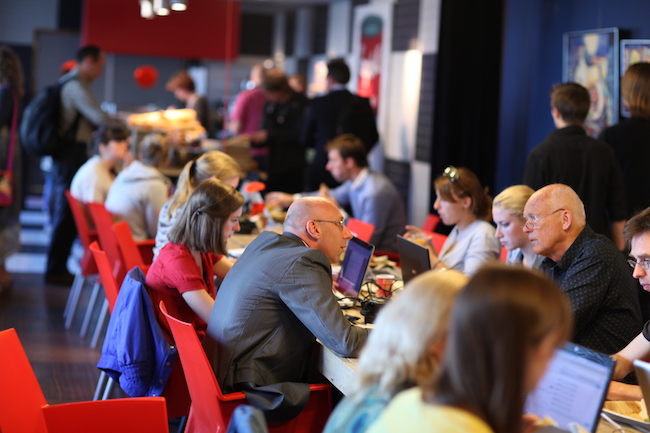 Back in 2014, I stood at the entrance to Seats2Meet’s flagship coworking space in Utrecht, Netherlands, and stared at a flat panel display showing all the names of all the people working there and their skills in real time. Ronald van den Hoff, Seats2Meet’s president and co-founder, explained that anyone could work for free in a Seats2Meet space as long as they agreed to help other people in their network. The fuel running the network is social capital. Seats2Meet’s website and mobile app enable users to search its entire network for people they need help from and shows where they are physically located at that time. 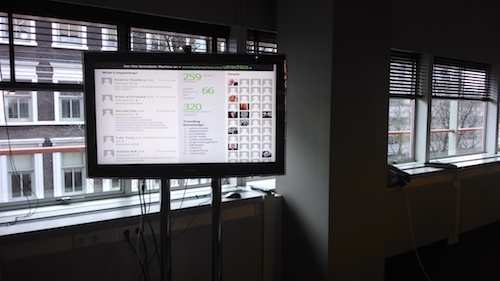 After first learning about the organization the year before, it finally clicked on this trip that Seats2Meet’s model is an essential part of the future of work. The company had cracked the code on how to turn any space into a free coworking space and make money on it. In the process, it created a new, empowering social contract between what the founders call “knowmads” — freelancers, tech entrepreneurs, and small business owners that make up the bulk of their network.

How did they come up with this unique formula? Like many great innovations, it took a crisis. Ronald van den Hoff and Marielle Sijgers, the CEO and co-founder of Seats2Meet, began experimenting with free coworking models in 2005. Prior to this, they had run a fairly standard, full-service corporate hospitality business. They offered big corporations meeting spaces of various sizes at their facility, along with a full suite of event services including event design, catering, and audio visual support. They helped their clients host board meetings, staff retreats, sales conferences, and other offsite meetings. It was a successful business, but revenues started to decline as the business matured and the economy changed. Big companies were downsizing. Few had the budget to host big events. Large-scale events became less and less frequent. They saw the writing on the wall. They had to change or go out of business.

So they began experimenting. They started with two realizations. First, they had a valuable idle asset — meeting space that was often empty, even when business was good. Second, the economy was changing quickly from one dominated by a limited number of big businesses to one made up of many freelancers, startup entrepreneurs, and small business owners. In 2005, they started inviting the latter to use their space for free. They also offered them free lunch. This social media savvy user group buzzed about Seats2Meet online constantly as a result. The number of users swelled to 250 within the first month. By 2012, there were 15,000 users. Most users were in Utrecht, which is a transit hub in the center of the Netherlands, a good location to expand further in the Netherlands as well as across Europe and beyond. 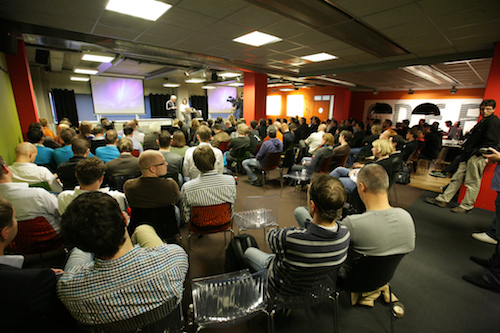 Today, Seats2Meet has 175 locations in 25 countries, serving hundreds of thousands of users who generate 75,000 paid bookings per year. Part of Seats2Meet’s formula for success is that by offering free coworking and lunch every day at Seats2Meet-controlled facilities, its premium event space and services are booked nearly 100 percent of the time at full price. This is achieved with no paid advertisement. The company’s advertising is all free — word of mouth. Grateful freelancers tweet and share on Facebook about Seats2Meet’s free, high-quality work space. This reaches millions of people. And when users need to host an event or meeting, they are happy to pay Seats2meet full price for it.

This dynamic is what gave Seats2Meet the idea to grow globally by enabling any business, organization, or individual controlling a physical space, to do what they did in their first location in Utrecht in 2005. Early in their experiment, they began developing software to connect their community. After many starts and stops over the years, they eventually hit on a business model to expand globally through an app.

The formula works like this: “Knowmads” get free coworking if they help each other, space owners generate new business if they offer free coworking to knowmads, and Seats2Meet makes money from space owners who list their space on Seats2meet. Owners of various spaces, including everything from ice cream shops to libraries to cafes, pay 99 euros each month to list their space(s) on the Seats2Meet platform. Owners must also offer “knowmads” free wifi and space to work. This generates valuable and vocal foot traffic for them. The “knowmads” tend to buzz about these locations online just like they do for the original Seats2Meet location. It’s also a much cheaper form of advertising for property owners than Yelp or traditional Yellow Pages advertising. While Seats2Meet still makes money on its own premium event services at company-controlled locations, today it’s more of an app-driven tech company than a hospitality company. 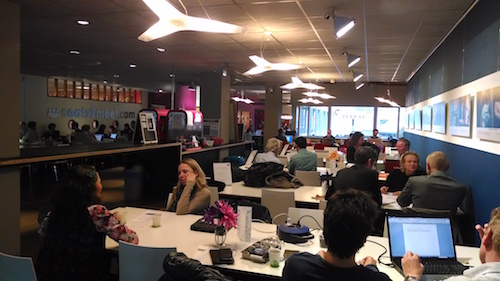 That said, its roots in hospitality go deep and influences everything. In fact, the slogan of the company’s holding company CDEF is “a celebration every day.” This spirit pervades Seats2Meet and its network. Sijgers and van den Hoff want every member of their community to enjoy and develop as individuals through the Seats2Meet experience. They’ve avoided venture capital funding for this reason. They do not want rapid, Silicon Valley-style growth, which they believe would water down the Seats2Meet culture and experience. They want to grow organically by providing great, even transformative, experiences for their users on a regular basis.

They’ve successfully self-funded their growth so far, but profits and raving users are only part of their growth strategy. In fact, the collaborative relationship between Seats2Meet and “knowmads” goes deeper than free space and advertising. The app connects the Seats2Meet team to the most talented freelancers in the Netherlands and beyond on a positive, trusted basis from the start. Whenever they have a new project to tackle, they know who to call. These freelancers are often eager to work with Seats2Meet on favorable terms, which sometimes include bartering of services. Taken all together, the company’s growth strategy hinges on good relationships, valuable developmental experiences, and trust between all stakeholders — and not huge influxes of money from investors, which is all too often the case with venture-funded tech companies. This seems like an appropriate growth strategy for a true sharing economy company.

The next step in Seat2meet’s evolution is the Serendipity Machine. Serendipity is about finding what you need but weren’t looking for — it’s a positive experience, but it doesn’t happen regularly. The machine aims to ensure it happens on a regular basis. The company is pursuing this through an app that anyone can use — not just Seats2Meet users. The app leverages artificial intelligence to bring individuals together based on shared needs and location. It works in 170 locations and 20 countries. Users can meet up to help each other in person or ask a question to the entire user base. It’s a combination of Quora meets Foursquare, but with the positive, empowering Seats2Meet spirit inside. The world could use more of the spirit that has driven the company’s success so far.

This piece was originally published in “The Sharing World” by the Sharing Economy Association of Japan. All images courtesy of Seats2Meet.