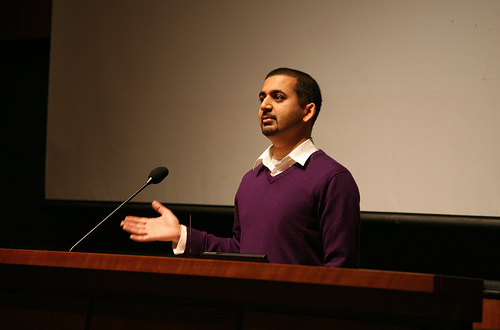 Expert Labs is a Web2.0/Governement2.0 hybrid headed by the internet expert Anil Dash. Started in November 2009, this AAAS-associated non-profit promises to become a major collaboration between experts in the academic world and policy makers.

This is a project that makes a lot of sense. The academic community, despite its hierarchical "old dude's club" mentality, is fundamentally a shareable network. Brilliant minds have known for centuries that collaboration produces a great wealth of diverse, successful achievements.

Unfortunately, this ancient system has a built-in limit to its shareability since participation in the network requires a sufficiently large vocabulary as well as a sufficiently deep grasp of highly specialized knowledge.

Despite the inherent limit to participation, it was the academic community's research ethic that has led to broad scale collaborations in recent years (ever heard of the human genome project? Just look at those author lists), and in fact, our Earth's most shareable communications resource, the internet, was created by academics to share research with other academics.

As a molecular biologist myself, I recognize the problems that academia struggles with in sharing its knowledge with the community — I mean, who but us nerds understands this kind of technical, detail-oriented jargon?

It is no surprise to me that any academic dispute over the fine details of research (global warming, stem cells, etc.) could be sadly misconstrued by politicians and the public in general as an indication of deep contentions within specific fields. Education of the public is sorely deficient — but it is getting better.

Some may be tempted to think that scientists and academics are holding out – withholding information until it is too late, etc. But while professors tend to be a tinge megalomaniac (yes, many do have a god-knowledge complex), most want their research to be known broadly and understood deeply. The only way to do this is to increase public access to academics and deepen the level of their involvement in every aspect of public life possible.

Actually, many organizations have taken a cue and are hiring PhD's fresh out of their dissertations. The result is that many of today's business and policy decisions are made by highly informed by experts in their various fields. The result, hopefully, is that a research-driven expert decision occurs, and that the research ethic of experimentation and constant improvement becomes more ingrained in our society.

Unfortunately, most of the advice given to policy makers tends to be done on a limited scale with a few top researchers in small, closed-door meetings, lacking academic consensus. If progress is to be made in the use of and sharing of expert opinion, everyone who has expertise needs a chance to contribute.

Enter Expert Labs. Their idea is to provide Web2.0 tools to academics and experts which encourage open participation in informing policy makers about necessary facts to consider prior to making policy. Additionally, it functions as a sort of idea incubator, allowing experimentation of various new approaches and their more rapid implementation in public policy.

So how does it work?

First policy makers are faced with a problem — for example, a public demand for shareable/public healthcare that is affordable, high quality, and universal. Policy makers create a standardized, open call to action. Expert Labs then provides the academic community with the Web2.0/social media tools for participation.

Ideas flow, debate ensues, and consensus ideas emerge. The best consensus ideas win, and are rewarded further with grants and/or startup capital for an entrepreneurial/contract solution. Ideas are further researched and then finally put into action on a national level. The end of anonymous task groups, the rise of universal consensus.

At least, that's what Dash is telling everyone. So far, the project is in its developmental stages and no official projects have been announced.

That being said, the potential of such a project really has the capacity to change the face of expert opinion in government. With clear consensus opinions on important topics, the public will have a renewed ability to understand the world of research. With this information, politicians will have to make much clearer stances on the scientific validity and rational strength of their positions.

Sharing is all about access — breaking down barriers. If the public can have greater access to consensus scientific opinion, I believe that many of the misunderstandings inherent in the public view of science and academia will slowly diminish.