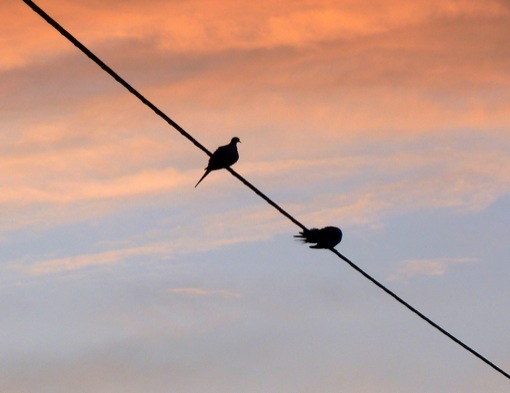 Pat yourself on the back, engaged Internet user: a new Pew study has found that you are more likely to be active in some kind of voluntary group or organization. According to the study, 80% of Internet users participate in groups, compared to 56% of non-Internet users, and 82% of social network users are group participants. Co-author Kristen Purcell explains, “One of the striking things in these data is how purposeful people are as they become active with groups. Many enjoy the social dimensions of involvement, but what they really want is to have impact. Most have felt proud of a group they belong to in the past year and just under half say they accomplished something they couldn’t have accomplished on their own.” It’s an observation borne out by the many projects and groups that we explore on Shareable–collaboration and group activity yields more results and is a more satisfying way to work, consume and agitate. Moreover, online participation can engender offline change. As our study The New Sharing Economy found, 78% of participants felt that experiences they've had interacting with people online have made them more open to the idea of sharing offline resources with strangers. 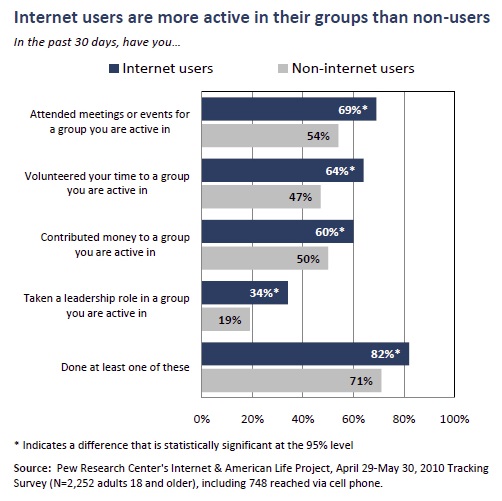 But before you break out the champagne, there are a few things to bear in mind while reading the Pew study. For one, Internet users are generally more affluent than their offline brethren, with more disposable time and income, making voluntary participation something of a luxury. Pew acknowledges that members of the non-Internet-using sample group “often report they are time-stressed or have health or other issues that limit their ability to be involved. And about a fifth of them say that lack of access to the Internet is a hindrance.” As Alex Howard at govfresh notes, “The disconnected are not, by definition, participants in virtual civic discourse or affinity groups. There are many shades to the digital divide.”

Also, while Internet users are more likely to participate in groups, Pew used a generous definition of the term. As detailed in the full report, everything from labor unions and community organizations to fantasy football leagues and Jersey Shore message boards were included in Pew’s definition of group activities. And as the 2009 Pew study “The Internet and Civic Engagement” demonstrates, when you drill down to levels of civic engagement, the numbers drop: 56% of Internet users identified as members of a civic or political group, compared with 36% of all adults.

While studies like this often function as feel-good tonics for the digerati, it’s important to ask why these disparities exist and consider what sort of group activities we’re lauding: The digital divide may be widening, particularly between developed and developing countries. Online gov 2.0 hash sessions and gossip about Snooki’s latest drunken exploit use the same social media platforms for very different ends. What is evident is that Internet users are clearly more likely to be collaborative and group oriented than non-users, and that the tools that connect us are at our disposal. And as Jeremy Adam Smith observed in his post “Learning to Trust Online”, the sense of trust and collaboration engendered in online communities of all kinds can be harnessed for larger kinds of collective action. Bearing this in mind, the Pew studies best read as provocations, to bridge the digital divide while increasing civic engagement among those who already have the tools at hand.