The Ecological Footprint of e-Books - Shareable
Skip to content 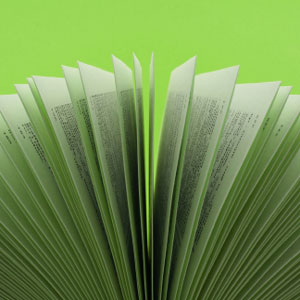 One of the great promises of digital content has long been its purported eco-friendliness–in the early days of the battle between bloggers and the old-school media, bloggers touted the ecological footprint of blogs, which were surely more green than dead-tree media such as newspapers and magazines. In time, the new media has proven to have its own share of hotly debated environmental costs.

As the iPad and Kindle become a growing concern, the debate over the environmental effects of print versus digital are again coming to the fore. The argument in favor of digital books makes intuitive sense: compared to a stack of dead trees printed upon using toxic chemicals, e-books must be greener. But in truth, things are a bit more complicated.

The e-reader's manufacture, along a vast supply chain of consumer electronics, is relatively energy-hungry, using 100 kilowatt hours of fossil fuels and resulting in 66 pounds of carbon dioxide. For a single book, which, recycled or not, requires energy to form and dry the sheets, it's just two kilowatt hours, and 100 times fewer greenhouse gases.

One e-reader requires the extraction of 33 pounds of minerals. That includes trace amounts of exotic metals like columbite-tantalite, often mined in war-torn regions of Africa. But it's mostly sand and gravel to build landfills; they hold all the waste from manufacturing wafer boards for the integrated circuits. An e-reader also requires 79 gallons of water to produce its batteries and printed wiring boards, and in refining metals like the gold used in trace quantities in the circuits.

In comparison, the creation of a print book looks positively green:

A book made with recycled paper consumes about two-thirds of a pound of minerals. (Here again, the greatest mineral use is actually gravel, mainly for the roads used to transport materials throughout the supply chain.) And it requires just 2 gallons of water to make the pulp slurry that is then pressed and heat-dried to make paper.

It's not particularly useful to compare the cost of an e-reader to a single e-book, however–an e-reader can hold hundreds if not thousands of books after its production, while a print book is a single physical product. Not to mention that the environmental effects of its creation may be dwarfed by those of its transportation and purchase. The New York Times contends that buying a book online and shipping it 500 miles causes as much pollution as creating the book, and a ten-mile round-trip to the nearest book store causes five times as much. The writers contextualize this in comparison to an e-reader:

You'd need to drive to a store 300 miles away to create the equivalent in toxic impacts on health of making one e-reader — but you might do that and more if you drive to the mall every time you buy a new book.

The variable we have the most control over is how our personal behaviors contribute to the cost of the e-book or paper book. In a post on the Los Angeles Times website, blogger Siel puts these considerations in direct terms:

…someone who only reads paper books — but mostly borrows the books from the library which she gets to by bicycle (that's me) — will have a vastly different reading carbon footprint than someone who drives their Hummer to the bookstore and buys books printed on virgin paper.

There has yet to be a conclusive study that compares the environmental cost of a single e-book in comparison to a single print book, so we're left to draw conclusions from the rough comparisons made in the New York Times article and this well-considered Exact Editions blog post. Until then, it's best to be aware of our consumption behaviors, no matter which we prefer, and push for further research comparing the respective ecological footprints of e-books and print books. And if we want to play it really safe, follow Siel's advice and make better use of what may remain the greenest (and most shareable) distribution system: the public library.