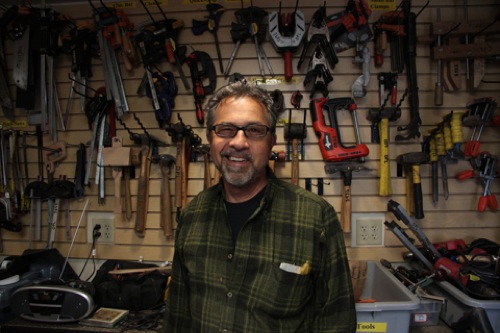 If you are still under the impression that libraries only lend books, then you’re in for a surprise. Libraries are multi-dimensional community hubs offering a range of in-house classes, workshops, cultural events and resources. Lending out toys, tools, sheet music, chess sets, child-development materials, seeds and more, libraries have established themselves as leaders in the sharing movement.

“Everyone doesn’t need to own a complete set of tools,” says Ty Yurgelevic, branch manager of the Temescal Tool Lending Library in Oakland, Calif. “It doesn’t make sense ecologically. Then there’s the cost and the storage. Why not have someone else store the tools and just use them when you need them?”

Part of the Oakland Public Library system, the tool lending library functions like any other self-standing branch. Patrons can borrow tools including drills, saws, routers, hand trucks, ladders, voltage detectors, lawn mowers and hundreds more, eight at a time, for three days. Born of the community’s need to retrofit, repair and restore homes after the 1989 earthquake and 1991 Oakland Hills firestorm, it is an example of a library emerging and evolving in stride with its community.

Initially funded by a community development block grant through the federal government, the library was limited to serving just one of Oakland’s seven districts. Once administration realized that it was going to be a program that took off, they found a way to fund the library through the general fund and opened it up to the whole city.

In the library’s first month, it loaned out 51 tools. It now has over 4,000 check-outs a month. It’s a great success, and it’s not alone. Two miles away is the long-running (1979) Berkeley Tool Lending Library, and others are springing up around the country. They make sense and communities are investing in them.

There are also libraries that lend fishing poles and tackle boxes, kilowatt detectors for gauging electricity use, zines, adaptive-education materials, cake pans, portable smoke detectors, art and much more. Collections vary depending on donations and community interest, but libraries are committed to providing access to useful materials and are open to working out the logistics.

Despite financial hardship, libraries are re-positioning themselves as lenders of all types of materials, both physical and virtual. Forging boldly into the digital realm, many libraries now provide online access to catalogs, digitally-archived collections, music files and e-books.

“We’re changing the way we present information about our library,” says Micah May, Director of Strategy for the New York Public Library (NYPL), detailing some of the changes that the NYPL has made to enhance patrons’ digital experience with its new interactive catalog. Using a user-centered interface curated by Bibliocommons, library patrons can rate, recommend, review, tag and discuss books online.

As patrons interact with the catalog, they enhance the collection and the catalog becomes more valuable and useful. The data is shared with over 40 library systems including Boston, Seattle, Vancouver, New York and Santa Clara.

“We’re optimistic that this will really change how people interact with libraries and the depth of interaction,” says May. “Libraries can become the go-to places for talking about, reviewing and discussing media.”

A platform that aggregates the shared experience and opinions of contributors, Bibliocommons taps into the power of the crowd to deepen and enrich the library experience.

“Libraries can become very powerful aggregators of knowledge,” says May, “that are built by the participation of users.”

Widening their stance in the digital domain, libraries are still working out some of the kinks of loaning e-books. Two of the big publishing houses won’t sell libraries e-books until they develop a workable business model that addresses their concerns about profitability, author royalties and the unlimited “shelf-life” of an e-book. Other publishers do sell to libraries, and many library systems already have e-book catalogs thousands of titles deep.

The recent partnership between Amazon and 11,000 public libraries to lend e-books for Kindles has given libraries another way to expand their digital domain. Under the current agreement, library patrons search for e-books through their public library website. When they are ready to download one, there’s a “Send to Kindle” option that directs to the Amazon website where they log-in and the e-book is downloaded to their device. Not all e-books are available to borrow and concerns have been raised about such issues as user-privacy, the ability to borrow e-books more than once and whether libraries will get an affiliate commission from borrowed books that lead to a sale, but demand for e-books is growing and the move could increase library use significantly.

Utilizing people’s willingness to contribute to the information commons, libraries are also enlisting patrons’ help in digitally archiving special collections that have not previously been available electronically. The NYPL has 40,000 restaurant menus spanning from historic to the present day that need to be transcribed from images into data so people can search them by dish, restaurant, date etc. Patrons can access images of the menus online and enter the information found on them into a database. The project has been met with great enthusiasm and participation. In the first four months, patrons have transcribed half a million dishes. By the end of next year, they’ll have an account management system in place so contributors can see what they’ve done and what others have done. And there’s a lot more where that came from.

“We found over 870 examples of collections that need this kind of work,” says May. “There are literally millions of tasks that librarians will never have the time to get to, and there’s a great appetite by the public to contribute to something meaningful.”

”People collaboratively create knowledge,” he says. “I hope that 20 years from now,” he says, “collaboration and cooperation with users is the norm, not the exception; that users interact with everything.”

Lending e-books, menus, streaming music, power tools, puzzles and much more, libraries are continuing to adapt to the changing needs of the communities that they serve. They are future-forward, locally-focused entities connecting patrons with informative and useful materials to enhance ourselves and the world around us.

“People are always reminding us of what a great service we provide,” says Yurgelevic. “Most librarians go into the work because they enjoy reading, but they enjoy helping others. It’s a win-win when you get thanked, countless times every day, for doing your work.”

Check out all the posts in Shareable’s four-part series on the future of libraries: