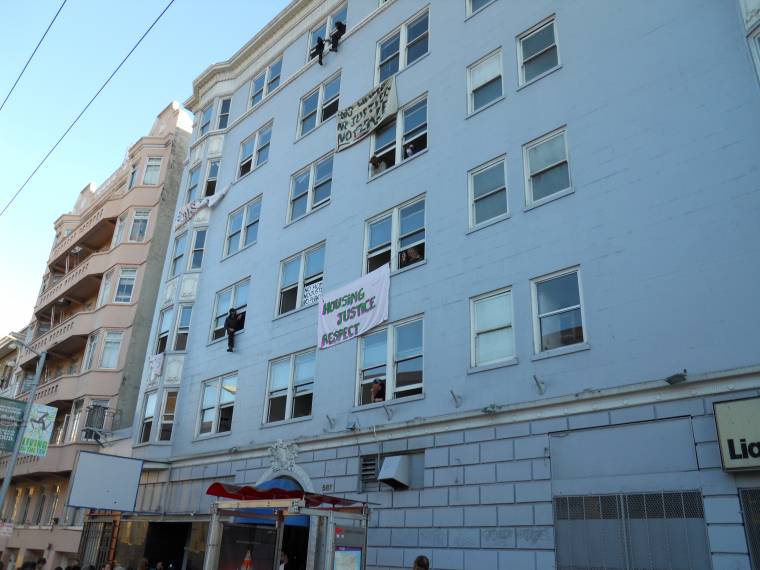 Last Sunday was World Homeless Day, and a group in San Francisco took some unorthodox action to bring attention to the city's unhoused. After a rally, a seemingly ad hoc group calling itself "Creative Housing Liberation" occupied a vacant hotel in the Tenderloin neighborhood, unfurling banners out the windows and declaring the building open to all those who needed a place to sleep. According to first-hand reports, police officers first closed down the street to traffic, but with no landlord in sight, had no right to arrest the occupiers and re-opened the street. The new residents stayed overnight, and when police showed up Monday morning, they had disappeared.

This action shares some elements in common with well-worn forms of community organizing: the rally, posters, banners, and the combined efforts of different groups, but these activists' tactics are directed at changing people's lives rather than laws or policies. To the occupationists, the boundary between private and public spheres is artificial and paralyzing, forcing organizers to fight for public solutions to supposedly private problems like housing. Why march to city hall when there are thousands of empty housing units in San Francisco just waiting for occupants? Their ethic is autonomous community improvement, solving human problems without regard for governmental or property restrictions, even if it puts them on the wrong side of the law.

The former Leslie Hotel, the occupied building, has been vacant since the California Culinary Academy's lease expired in 2008. The owner, John Chiatello, told ABC News that "We've had the building up for sale and have talked with various agencies about the building, but no one has any money, so we've had to hold the building." While property owners like Chiatello have held onto their buildings through the real-estate market crash, San Francisco's unhoused population has spiked. Last July, the city closed its public housing waiting list at 30,000 – five times the number of total public units. For the individuals who make up Creative Housing Liberation, this wasted abundance is intolerable while some are still forced to sleep on the street.

This isn't the first time activists have refused to rely on existing power structures to fix social problems. A few weeks ago, Missoula, Montana activist Bob Giordano and two friends painted their own bike lane on a street they found particularly dangerous for cyclists. Giordano and co. were less successful at evading capture, and the three now face criminal mischief charges, a charge usually used to prosecute vandals. In both cases, there is a disjuncture between community interests and the laws police officers are bound to uphold. Giordano describes passing motorists shouting approval and one Creative Housing Liberation member got these words of encouragement from a neighborhood shopkeeper: "I’m with you, this building should’ve been full for the past two years. These people [the assembled outside] are my customers. I’d be doing better business if people lived in the building."

In his newest book, Common as Air, Lewis Hyde describes the process whereby communities have historically protected their common resources from private and/or government enclosure. This "beating of bounds" ranged from the destruction of imposed boundaries (like fences) to unambiguous piracy, and was a crucial element in the maintenance of common land and goods. But in a world where common space has been all but eliminated, where are the edges left to defend? Acts like the Leslie occupation and Bob Giordano's self-described "positive citizen action" are demonstrations that contemporary beating of bounds will take the form of reclamation.

Creative Housing Liberation did not solve San Francisco's epic homelessness problem, and a few days later the city seems no closer than the week before. But on Sunday night, without the help of government agencies or private charities, a few of the city's homeless had a place to sleep. With empty buildings and full shelters, occupation may represent the last best hope for the city's marginalized.