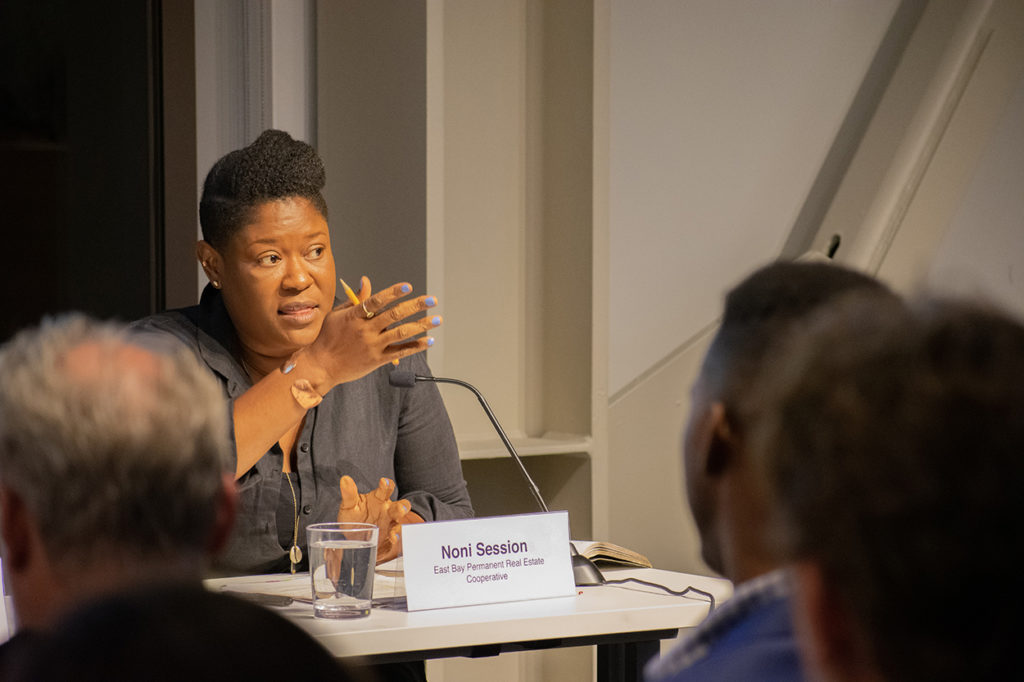 The Bay Area is in the midst of an unprecedented affordable housing crisis, with people being displaced in the thousands — many from homes and cities where their families have lived for generations. Perhaps not surprisingly, the crisis is impacting poor people of color disproportionately, with 66 percent of the Bay Area’s low-income African American households, and 55 percent of the region’s Latinx households, either experiencing or facing the risk of gentrification.

The state and various municipalities have been attempting to address the crisis for some time now, but often their proposed market-based solutions — such as simply building more housing — don’t address the underlying causes of displacement. However, there are many advocates and organizations hard at work to not only address the immediate needs of those at risk, but to do so in a way that empowers residents and addresses the root causes that stem from structural racism and capitalist ideology.

Robert Raymond: Can you start by sketching a picture of what’s happening in Oakland right now in terms of the affordable housing crisis, and what communities are being disproportionately impacted?

Noni Session: I often say that this thing we call the ‘housing crisis,” isn’t actually a housing crisis — it’s a distribution crisis. We have over 10,000 empty units and over 20,000 empty luxury units in the Bay Area right now, and yet people are still under more than 50 percent rent burden, and there are still 9,000 people lying on the sidewalk. It’s not a housing crisis we’re experiencing: it’s philosophical; it’s economic; and it’s political. It’s about our priorities. We have to recognize that.

What’s happening in Oakland is that thousands of legacy Oaklanders have been displaced in the last decade — that’s a huge segment of the population — and this displacement is highly racialized. The most underserved communities that are suffering are black, indigenous, people of color, differently-abled, [and] trans people. So all of our underserved populations and working-class populations are the most vulnerable in the transition we’re seeing not just here in Oakland but in urban areas nationwide.

These folks have been displaced due to a number of factors. Rising rents is a major one — or what we refer to as ‘rent blight.’ Another major factor is the untaxed finance industry and the privileging of market actors and profiteers. This is exacerbated by wildly speculative land prices that come off of the arc of the last bubble burst where small communities — working class black people, and people of color — lost billions of dollars in assets due to artificial land inflation and predatory lending.

You’re seeing this in cities worldwide. And in Oakland, with the history of activism and pushback on these unchecked processes, this has become one of the prime places to really try to make a difference and make some incursions against the growing displacement rate.

What have you and your team been doing to help mitigate and reverse some of the trends in displacement that you just outlined?

But I would even correct myself and say that it’s not a new way. It’s the way that communities always supported themselves before this religion that we call capitalism. Collective economic action was always the intuitive go-to…. [But], we now give so much power to the so-called “invisible hand of the market” [and] simultaneously efface the fact that there are people with agendas and intentions that drive the market. That it is not a natural mechanism, but very much a human cultural, technical and power-based mechanism.

Practically speaking, we provide resources that help community members to own and collectively govern assets by putting together low cost, non-extractive capital stocks for their small-site development projects, and at the same time build an equity account for our resident owners so that there is wealth building, ownership and control built into the structure of our projects.

We also do a lot of outreach and organizing across sectors. So we talk to philanthropic investors, mission-aligned lenders and CDFIs [Community Development Financial Institutions] about the ways that a differing approach to co-op lending, and lending to small community-based projects, can provide a non-extractive return on investment while re-assembling communities that have been dismantled by the very financial tools we’re still using. We’re really trying upset a comfort with conventional approaches to financial tools as they’ve been handed to us, and recognize that there are ways to re-tune our lending expectations, our definition of risk, and how we prepare communities and projects to receive non-extractive funding.

We also go and spend a lot of time with folks who are inside of our sector. We call our sector community investment, but people tend to think of us as a housing organization. We spend time with affordable housing developers, community land trust members and other non-profits who are looking to create community control and stability.

We’re really trying to activate them around a concept of anti-competition, because that competitive thrust for seeking out funding, for using funding, for how we design our projects, for how we build community relationships, has really created a silo between our work. These silos weaken us and keep us focused on donor needs instead of community needs. They keep us competing for the small dollars. Instead, we believe that these large philanthropic organizations should channel their money into really impactful and widespread projects — not just piecemeal. [We advocate collaborating on funding] applications where folks are competing for the same money that could potentially go further if they were working together.

And you also do quite a bit of outreach and organizing to the underrepresented communities themselves?

What are some of the projects that you have going on right now?

We have our flagship project at 789 61st Street in North Oakland. That [was] our first community-based acquisition. It really gave us a proof of concept that we could put together a low-cost capital stack and create ownership for folks who wouldn’t necessarily have the capital or the credit to buy a property on their own. In the acquisition, we really got to see how you build out the inputs for sustainable change and housing in underserved areas and communities. We’re excited about that because we’re going to be adopting a lot of the lessons we learned into our open-source learning materials for our non-profit arm, Collective Action and Land Liberation Institute. It’s given us the attention and the capacity to expand our staff and really start to build out a robust vision of what our work in Oakland and the East Bay could do.

We have two other properties that we’ll be developing in 2020. The second one is in Berkeley, and the really groundbreaking thing about this property is that [it] was donated by an elderly dancer who really believes in Just Transition. She feels like part of the problem with the system of holding commodities is that commodity hoarders are the challenge. So instead of hoarding another housing resource, she has chosen to donate it to [EBPREC]. And it’s a $1.3 million asset. Not only will we be using it to support cooperative and regenerative art inside of ownership model of the house in Berkeley, we’re also using that property to demonstrate a new legal tool that we’re building with our partners, Sustainable Economies Law Center called The Land Justice Easement. It’s analogous to the agricultural easement where, attached to the title deeds to the land, is a restriction where any owner to whom the land is passed cannot ever charge extractive rent or sell it for an exploitative, speculative price.

The third project is really interesting because it’s becoming the springboard for all of the projects that we have for our plan for 2020. We have an empty plot in West Oakland that a community member saw was going up for sale to a commercial developer, and he did not want to see another townhouse in his neighborhood. He had some excess capital, and he used the part of that capital to buy this plot for EBPREC. We’re going to be co-developing it, building environmentally sound housing, and organizing community members around an environmentally regenerative vision.

It’s a vision of land and housing acquisitions that root an anchor culture and that provides a place from which people can be activated, because a critical part of our work is movement building. But when you don’t have a place from which to build a movement, it never has a strong foundation. So we’re really happy about our projects this year, offering us the opportunity to create a foundation for more acquisitions, for more community-based visions, and more cooperative ownership.

This article is a follow up to our editorial series on land use and housing policy challenges and solutions. Download our latest FREE ebook based on this series: “How Racism Shaped the Housing Crisis & What We Can Do About It.”

Robert R. Raymond is founding producer of Upstream and a producer of The Response. He is passionate about exploring the intersections of sound design, storytelling, and eco-socialist principles

Robert R. Raymond is founding producer of Upstream and a producer of The Response. He is passionate about exploring the intersections of sound design, storytelling, and eco-socialist principles to help ease our way out of these tumultuous times. Twitter: @robpertray