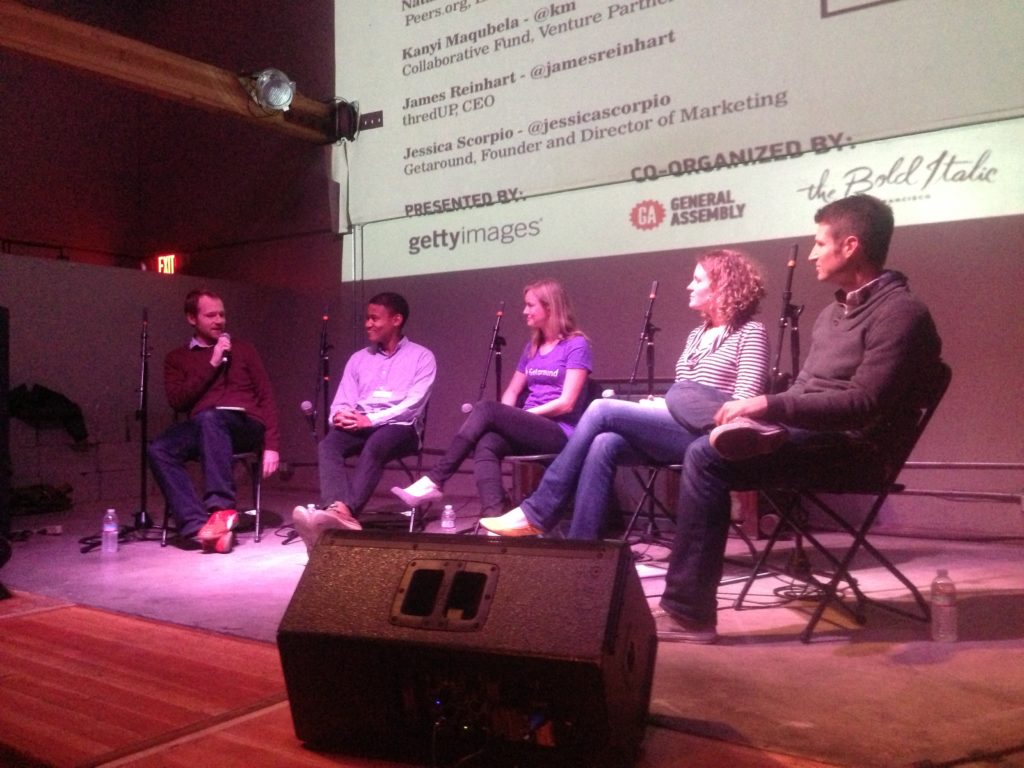 Sharing enthusiasts gathered at Public Works in San Francisco on Monday, January 27 to hear a panel of experts discuss the future of collaborative consumption. The event was co-hosted by The Bold Italic and General Assemply and presented by Getty Images. Speakers included Natalie Foster of Peers, Kanyi Maqubela from Collaborative Fund, James Reinhart of thredUP and Jessica Scorpio from Getaround, who each brough their own unique perspectives to the table. Moderating the group was writer Ryan Lawler of TechCrunch. The panel, kept lively by Lawler and Reinhart’s rye quips, covered the state of collaborative consumption and where it’s headed.

Why is this happening now?

“The old economy isn’t working,” said Foster. People have found a more rewarding way to access resources and mobilize their own. And, frankly, the economics work. While the sharing economy isn’t new, technology has enabled it to scale to the global level. And the trend of people moving to cities complements the movement well. Sharing is easier when people are in close proximity and already interact regularly. Scorpio pointed to the recent economic downturn as a major catalyst. Reinhart attributed much of the current success to Airbnb, stating we would not be here without them.

This is a powerful movement.

The sharing economy is crossing over to multiple facets of people’s lives. Yes, our relationship to goods is changing. We are realizing that access is more valuable that ownership, which is what most sharing services emphasize. But Reinhart took it a step further. Using his company thredUP as an example, we now have an easy way to use and reuse quality assets, versus constantly consuming poorly made commodities.

Lewis made the point that many jobs within the sharing economy often don’t leave doors open for upward mobility and have changed the relationship between a company and its employees. Is this a good thing? Whether it is or not, Maqubela thinks it is an “inevitable” cultural shift that people have found to be efficient. And as Reinhart pointed out, jobs are jobs. People are finding new opportunities for work that don’t necessarily conform to the same guidelines as jobs from yesteryears. Perhaps we need to rewrite the rules a bit so they take into account sharing principles.

Let’s face it – this is a reality that is consistently brought up in conversation. But what is the appropriate level of regulation? Maqbuela said this is a “necessary political question and the current regulatory status quo doesn’t map very well.”

Reinhart said the sharing economy is more policed than other services. If they are to be successful, they must be on top of their game. As soon as one incident takes place, than companies will be put under the microscope. The recent News Years Eve accident with an Uber driver is a perfect example. This question will get more complicated as these businesses develop, and it is likely we will continue to hear more complaints from other, non sharing oriented companies.

What is being done to address this? Foster said it’s being worked out in city halls across the country, pointing to California as an example where they have given sharing services space to try out their models. It’s going to require a fine balance of self-regulation and government regulation.

What does the future hold?

Lewis asked the panelists at what point does the sharing economy no longer work. According to Maqubela, what matters is that it becomes “commercially viable.” If the businesses are venture scalable and the marketplace is seeing enough transactions, then it will continue to succeed. But as Reinhart noted, it’s not up to us to judge what will and will not work. The more people who get involved, the more it will grow.

The night ended on the topic of connection. While the majority of the discussion was centered on the economics of the movement, an audience member brought us back to this important social value that is created. Foster said that people might come for financial reasons, but they stay because of the connections they make, whether it is through Airbnb or another service. Reinhart said that thredUP wasn’t that interested in creating a personal connection between buyers and sellers, but he tried an experiment that changed his mind. He created a function on thredUP.com that allows people to see more items from the person who sold the item. It ended up being the most widely used function on the site.

Yes, the economics make sense. But people also are finding a social value through collaborative consumption that they often have a hard time finding elsewhere. These two factors make the sharing economy a powerful movement that’s likely here to stay.