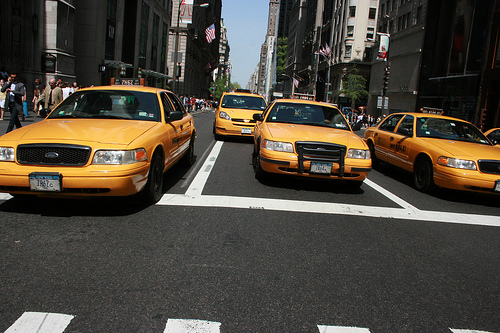 This week, New York City’s Taxi and Limousine Commission will launch a cab sharing program along some of the city’s well-traveled corridors. It’s a year-long pilot program, and just one more step in the direction of diversifying ridesharing and shared transportation options in our cities. According to the New York Times this past Sunday:

Up to four passengers will be able to share a yellow taxi ride, car-pool style, along three preset routes in Manhattan.

The flat fare will be $3 or $4 a head, significantly less than the regular metered rates, and riders can ask to be dropped off at most points along the route. The shared rides, which will pick up passengers at designated taxi stands, will be allowed only on weekdays from 6 to 10 a.m.

Cab sharing could perhaps be on the rise, as I’ve recently heard examples of it happening in Washington D.C. and Seattle. However, cab sharing isn’t entirely new. As my Sharing Solution co-author Emily Doskow pointed out in a blog post, cab sharing is already or has long been a a way of travel in many other countries. In fact, in some places, the cab sharing systems, sometimes called “taxibus,” are the main mass transportation system. She pointed to a helpful Wikipedia article that describes taxi sharing systems around the world.

Also, in New York, since the 1980s, cab sharing has occurred regularly between a cab stand in the Upper East Side and Wall Street. This older cab sharing program was apparently founded by a local neighborhood association to allow residents to share cabs to any location in the city. The founders of the program call it a “disaster,” because Wall Street commuters quickly learned of the program, and their high demand caused the cab sharing stand to become strictly focused on rides to Wall Street.

It’s an interesting problem that a cab sharing program meant to serve a wide range of destinations was funneled into serving a limited destination. And come to think of it, in most places where casual carpools have taken hold, they usually travel along a very specific route. What this means is that we’ve yet to find a way to enable more targeted rideshare matchmaking and allow for a broad range of travel routes and destinations. It also makes me wonder: if a cab sharing program starts in a designated location, travels along a designated route, and has designated drop-off spots, then why not just turn that into a bus route? I suppose at least one benefit is that a shared taxi or casual carpool will make fewer stops, making for a quicker trip.

I’m keeping my fingers crossed that dynamic ridesharing will take hold. Companies like Avego and Carticipate have been working on developing the technology. Dynamic ridesharing systems will use route mapping, timing calculations, and GPS to instantly match drivers and riders for the purpose of ridesharing, and it could even automatically have a rider’s account reimburse the driver’s account for a portion of the mileage cost.

In the meantime, a cool new cab sharing app called RidePenguin recently debuted in Seattle and Las Vegas. Ride Penguin will enable arriving and departing air travelers to input their destinations into their smart phones and connect with other travelers for the purpose of sharing a cab.

What these companies and cab sharing programs recognize is that an empty carseat is a missed opportunity. If the technology keeps improving, our entire transportation system could look radically different in 10 years, and single-occupant vehicles will be so uncool. By then, I will be able to give up my car and replace it with a smart phone.