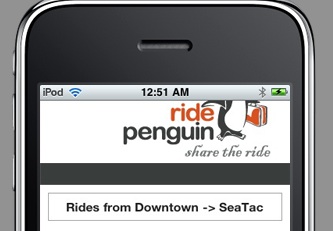 An article in the Seattle Times about cab-sharing from Seattle-Tacoma Airport got me wondering why more cities don't facilitate this money-saving and ecologically sound form of transportation. The article features a new application for the iPhone called ridepenguin.com–a free service that would allow travelers at Sea-Tac to enter a destination and connect with other arriving travelers going to a similar destination, so that the travelers could share a cab from the airport. The application was developed by two Seattle residents who would like to expand to other airports.

Something I thought was cool is that the concept has met with no resistance from the taxi company with exclusive rights to service Sea-Tac, whose representatives said "If people want to be creative and save money and be more green, we're absolutely OK with that."

The New York City Taxi and Limousine Commission is on board with taxi-sharing, too. In July of last year the "Commissioner's Corner" column addressed the different ways the Taxi and Limousine Commission was supporting taxi-sharing, including pilot programs to develop multi-fare meters, support group riding at reduced rates from taxi stands at points on busy corridors, and place "livery stands" at places like shopping centers.

In U.S. cities, where taxis usually supplement public transportation systems, cab-sharing is a great way for consumers to save money while, in many cases, generating additional revenue for the cab driver. In other parts of the world, taxis actually are public transportation. When I was in Amman, Jordan last year, we went everywhere by cab–there is no public transportation, and taxis are super cheap and always available. And according to Wikipedia, dozens of other countries use taxis as the main form of transportation, calling the service everything from "multi-hire taxi" to "taxibus."

Cross-posted with the blog The Sharing Solution.

Emily Doskow is an author, attorney, and sharer in the San Francisco Bay Area. With Janelle Orsi, she is co-author of The Sharing Solution: How to Save Money, Simplify Your

Emily Doskow is an author, attorney, and sharer in the San Francisco Bay Area. With Janelle Orsi, she is co-author of The Sharing Solution: How to Save Money, Simplify Your Life & Build Community. She is also the co-author of Making it Legal: A Guide to Same-Sex Marriage, Domestic Partnerships, and Civil Unions, and author of Nolo's Essential Guide to Divorce. Emily has been practicing LGBT family law in the Bay Area since 1989 and is currently Co-Chair of the Board of Directors for the National Center for Lesbian Rights.