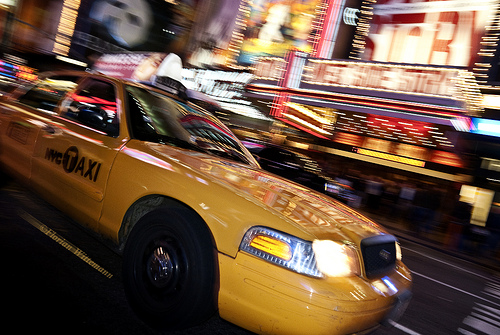 I lived in New York for 10 years, and admittedly people are in a hurry and wary of unwanted interactions–but I don’t think these are the reasons why the uptake of the program has been slow. I believe it is a design and awareness problem.

I surveyed 10 friends that live in New York, asking if they had heard of the Share-a-Cab program. The answer was a unanimous, “yes.”

I asked them if they would use the program: eight “yes’s”, one “depends,” and only one resolute “no.”

To the same ten friends, I asked if they knew where the share stands were located. Only one could remember a stand “somewhere around 72nd” — and even she admitted she only noticed it walking to work last week because, “Someone had tied bright yellow balloons to the sign.”

The Times article is fairly typical: within ten days of a year-long pilot of the Share-a-Cab program, the media have declared it to be "a failure.” In most of the reports I have come across, the journalist jumps to the conclusion that people don’t want to share because New Yorkers are “impatient” and they perceive sharing as “inconvenient.”

If that were true, ride sharing programs such as Zimride would not be taking off, and less people would take the subway. In fact, more people share transportation in New York than in any other US city. So how can we redesign cab-sharing so that more New Yorkers take advantage of it? How can we rebrand the program so that cab-sharing becomes a compelling thing to do?

Start with the signs: They are indistinctive, tiny, and squashed between "1 hour parking," and "no standing anytime" signs.  "Taxi Group Rides" (in small type) is the call to action, and the blurb underneath on how the system works is not clear.

What else has been done to highlight the routes and explain the benefits of Share-a-Cab?

Okay, the city have created a bad announcement that plays on screens for 30 seconds when you are inside the cab. But let’s face it, most of us turn those off–and who is going to remember the information when they exit?

Here is what I would like the Taxi and Limousine Commission to do: hire a smart designer like Michael Bieruit, Paula Scher or David McCandless or 'crowdsource' the challenge to the design community. Change the signs. Go further: create a physical hub where people will naturally congregate, similar to a bus stand. Design a cool infographic that highlights the locations of the stands. Place the graphic where people will notice and talk about it – back of bar coasters, on the subway, office bulletin boards and so on. The Commission might also consider creating an iPhone app like ridepenguin.com that helps make cab-sharing more convenient.

We also need to invent a new language that reframes the notion of cab-sharing and makes it cool. We only need to look to Zipcar to realize that brand, design, and a good system can change people’s perceptions around sharing. Indeed, for some New Yorkers, proclaiming you are a "Zipster" is as important and carries as much cache as the latest iPhone. We can do the same with cab-sharing.