Take a Walk on the Fun Side - Shareable
Skip to content 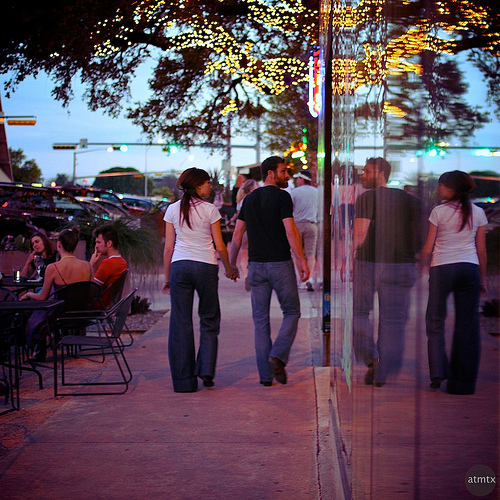 We all know that walking is good for us. It sheds calories, tones muscles, and clears our minds.

But taking a regular walk also reminds us of what  we share in common with others. The classic example are the warm weather countries where an after-dinner stroll—the passegiata in Italy, the paseo in Spain and Latin America, the volta in Greece—is as much a part of the culture as sunshine or siestas. In towns and even large cities, people amble around the same set of streets each evening. The shops are usually closed so the purpose is not shopping and errands, but to connect with their neighbors and enjoy their surroundings.

Writer Adam Goodheart described this scene near the main square of the Italian hill town of Eboli. “I realized that I kept seeing the same people, but in different combinations. Here came a blond woman pushing a stroller. Next lap, she was arm in arm with a younger woman and the stroller was nowhere to be seen. Later, they’d been joined by an old lady who was pushing the stroller. Next, they were surrounded by men, jackets draped over their shoulders…”.

The words passegiata and paseo translate into English as promenade—and the idea translates too, according to Christopher Alexander, a former Berkeley Architecture professor who has devoted his life to studying scientifically what makes places work. In his classic book A Pattern Language, he asks, “Is the promendade in fact a purely Latin institution? Our experiments suggest that it is not…It seems that people, of all cultures, may have a general need for this kind of human mixing which the promenade makes possible.”

Alexander lays out the two principles that enhance the experience and sociability of a promenade:

— The route should be approximately 1500 feet, which can easily be walked in ten minutes at a leisurely pace. People may opt for many times around—especially teenagers on the lookout for excitement or romance—but you don’t want to make the course too long for younger kids or elderly people.

— It’s important that there are things to see and do along the route, with no empty or dead zones of more than 150 feet. While the primary purpose of these strolls is social, people also like to have some destination: a sidewalk café, playground, bookstore, bars, the library, ice cream shop etc.

Think about what route in your neighborhood shows promise for strolling and what improvements could be made to get people out to meet their neighbors. Walking up and down Main Street or any lively commercial district is probably the most common North American version of the promenade, although a route along a waterfront or interesting residential blocks could work just as well. Public art, welcoming businesses, benches, flowerbeds, even a vending cart could all help solidify an area as the place where people go to after dinner to see and be seen in your community.

Adapted from the Great Neighborhood Book: A D-I-Y Guide to Placemaking written in collaboration with Project for Public Spaces and published by New Society Publishers.