Survival before sustainability: How vegan reforestation in Haiti got stuck - Shareable
Skip to content 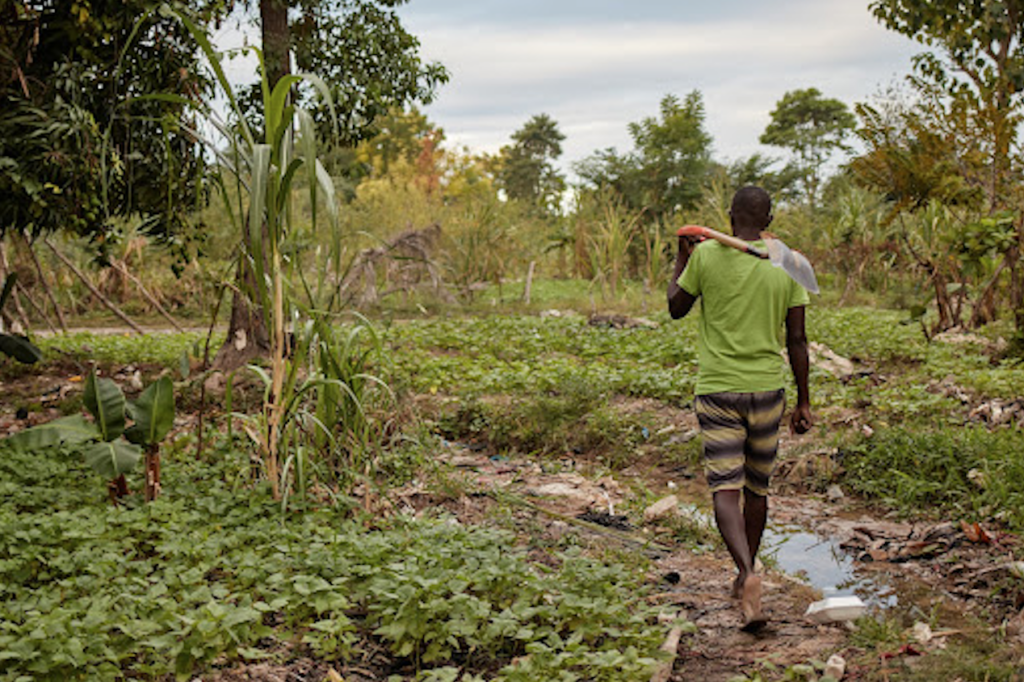 Just after sunrise, Haitian volunteer Patrick walks through a field of beans and sugarcane, with some mango trees on the side to plant trees with other Sadhana Forest volunteers. Credit: Aaron Fernando

In mid-2021, faced with the prospect of another grueling Covid winter in Ithaca, New York, I chose instead to volunteer with Sadhana Forest, a vegan reforestation community I had first encountered in the south of India that had since started an offshoot effort in Haiti.

I chose the Haiti location because I wanted to understand if a small-scale project in such a challenging place could actually improve environmental, financial, and social conditions locally. The only real way to gain that true understanding was to actually experience it for myself.

Haiti has received $13 billion in aid over the past decade—but it is clear that the aid industry has not altered the underlying economic dynamics. Haiti is still the poorest country in the Western Hemisphere. With less than 1% of its original forest remaining, it is also one of the most deforested places on the planet, and one of the most food insecure, with about a quarter of the population undernourished, according to U.N. World Food Program.

By the time I arrived, in January 2022, Haiti had been further isolated by a series of cataclysms and misfortunes. The previous July, Haitian President Jovenel Moïse was assassinated in his home. There had also been a large number of kidnappings, a tropical storm and an earthquake had destroyed lives and infrastructure, and then a couple of days before I arrived, there was an attempt on the life of the prime minister.

All this instability meant that for about half my time at Sadhana Forest, there were only a few international volunteers there: two Israelis and a woman from Germany, who stayed for just a couple of weeks. For the rest of my stay, it was just me, Krichna and Patrick — two long-term Haitian volunteers — and Nixon, the Sadhana Forest Haiti project manager.

Unlike the original project in India, where trees are planted around the forest itself, the reforestation work in Haiti involves planting trees in or close to people’s property. This is because in Haiti trees themselves are commodities, and must be planted where they can be protected. When Haitians are short on cash, some will chop down trees to make charcoal to sell.

This affected which trees we planted. The vast majority were called bwa blanc, the Haitian Creole term for “white wood.” Sometimes people wanted mango or orange, but mostly they wanted bwa blanc.

Importantly, bwa blanc is not a fruit-bearing tree. Rather, it grows quickly, and the wood from it can be used as building materials.

This confounded me. The project aspired to reforestation and food security, but we were spending our mornings planting trees that would likely get cut down. Yes, carbon still gets sequestered in the wood, but it doesn’t exactly reforest a space in the long-term.

After asking around, I found that this was because people actually didn’t seem to want the fruit and nut trees that the Sadhana Forest website promotes. One species, in particular, Maya Nut, is supposed to be very good for providing all the proteins and nutrients that you would need if you did not consume any animal proteins and fats.

However, it appeared that virtually no one actually wanted this tree planted near their house or in their fields.

It turns out that Maya Nut is just not part of Haitian culture or cuisine. And even though Sadhana Forest as an organization is vegan, none of the Haitians I met was vegan—or even vegetarian. A couple of times a week, we would go into the village of Ansapit and buy a meal that included fried chicken or fish.

Veganism also hadn’t caught on because—like so many places in the world—it is not easy in Haiti to get adequate nutrition without eating animals — unlike the original Sadhana Forest in Southern India, where most people are vegetarian already.

This gets to the heart of the idea that solutions need to be community-driven and tailored to local needs and conditions. Transporting a solution that worked in southern India to eastern Haiti didn’t always result in success.

This isn’t to say that Sadhana Forest was not providing valuable services in Haiti. It’s just that from my five weeks there, I saw that the most valuable thing that the organization provided was not trees or a vegan lifestyle—it was clean water.

The tropical storm I mentioned above destroyed both the electrical grid and the water system in Ansapit. So villagers did not have drinkable water or electricity unless they had a well or a generator. Most used rechargeable battery packs, flashlights, and purchased drinkable water in plastic bags.

But Sadhana Forest Haiti has water tanks with solar-powered pumps, and a spigot where dozens of villagers would fill up their buckets and jugs of water each day. Mostly, it was young girls coming after school or while their parents and older siblings were working, struggling to balance five-gallon buckets of water in their arms. Men and women on motorcycles (or the occasional donkey) would come by too.

Sadhana Forest wants to improve the pumps and the batteries so that water can be available at all times of day, but I also found out that the Haiti location already costs more than donations bring in—unlike the India location—so there’s not enough money for this upgrade.

Likewise, residents of Ansapit who could afford them would purchase solar panels to charge devices and run things like wells. But the ground is rocky, and drilling a well is not easy or cheap.

Not many people have wells.

Most roads in Ansapit are unpaved and rocky. When I was there, only two had street lamps. There was no mail; if you wanted something from a store, you had to cross the border, take an overnight boat, or travel on dangerous mountain roads. The only way to access the internet was through smartphones. The hospital lacked resources to provide care during emergencies, and people died as a result.

I spent a lot of my free time with Krichna, a 22 year-old Haitian who lives with four family members just outside Sadhana Forest in a tiny two-room structure patched together out of cloth, rope, plastic, and scrap metal. Playful and good-natured, Krichna was great company and generous enough to introduce me to his friends and family. His mother made me coffee—real coffee, which was rare for me there—one morning by heating the water over coals. In the evenings, we would visit his friends, walking and conversing in darkened houses and streets, because electric lighting wasn’t common.

Krichna asked me questions about how to get an education, how to access economic opportunities, how to help improve his family’s housing situation—questions I found difficult to answer. As we looked into options, it became apparent that international systems are pitted against Haitians. Even a visa — which would allow him to legally cross the border into the Dominican Republic to work, go to a bi-weekly market, or open a bank account — is prohibitively expensive. Same for U.S. visas, or any other. And he couldn’t raise money for a college or housing fund: GoFundMe and Venmo don’t work in Haiti.

Haiti has been subjected to centuries of environmental shocks, exploitation, and extraction—often at the hands of foreign powers. In the late 1700s, enslaved Haitians revolted and overthrew French colonists. In retaliation, France made Haitians pay “reparations” for their freedom, amounting to an estimated $21 billion in today’s dollars via direct payments and high-interest loans.

The United States is not innocent either. From 1915 until 1934, the U.S. invaded and occupied Haiti, meddling with its finances and establishing a military dictatorship. In the 1990s, the U.S. conducted another military intervention there. As recently as 2009 and while in contact with U.S. clothing manufacturers that use Haitian labor, the American Embassy pressured the government to keep the minimum wage low.

Though the lasting impacts of colonialism and exploitation are evident in Haiti, I did observe a sanguine spirit of mutual aid throughout my stay there. Haitians helped each other, and were kind to each other, offering their time and energy to each other and their extended families. Nixon, the Sadhana project manager, would help locals access things that they needed. He and his partner even ran a school for children.

But by the end of my stay, one glaring reality had become apparent: Supplemental foreign aid has its place, but without basic services and critical infrastructure, humans cannot thrive. When constantly victimized and made pariah by the international community, a whole country can be prevented from rising.

As I saw it, Sadhana Forest’s commitment to veganism — or even reforestation — is unlikely to pan out in a small Haitian village as it did in southern India.

There is nothing I could have read in a book or seen on a website that would have made me understand the nature of the problems faced by those like Krichna. The real truth was found by being there, trying to do one thing, and seeing that it was actually something else that held promise. The real truth is the ground truth.