Study: Bike Sharing Can Save Your Life - Shareable
Skip to content 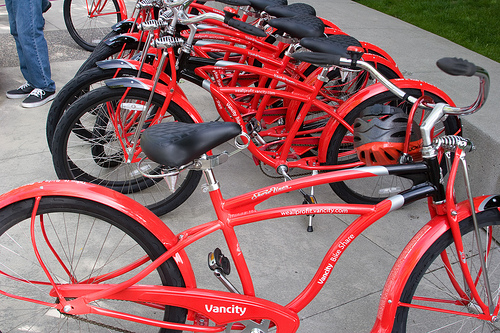 Bike sharing has become extremely popular in major cities around the world. Paris, Stockholm, Hangzhou and Mexico City have all implemented large scale bike sharing projects with great success. And there's even talk that Los Angeles might soon follow suit.

Rising fuel costs, traffic, lack of parking, and air pollution have motivated these cities to encourage their citizens to trade their cars for other forms of transportation. But now it seems there's proof of another bike sharing benefit: a longer life.

In addition to being cheaper and cleaner than driving a car, a new study published recently in the British Medical Journal found that bike sharing in urban environments can actually help save lives.

By August 2009, 182 062 people had subscribed to Bicing (11 percent of Barcelona's total population), with 68 percent of trips being used for commuting to work or school and 37 percent combined with another mode of travel. The average distance travelled by a Bicing user on a working day was just over 2 miles.

Accounting for the negative affect of air pollution and traffic mortality, as well as the benefit of increased physical activity, the study's authors found that bike sharing prevented the deaths of at least 12 people each year.

The relative risk of road traffic crashes for the Bicing population compared with car users was 1.0007, with an associated attributable fraction of 0.0007, resulting in 0.03 extra deaths per year from road traffic incidents in the Bicing population. As a result, 52.15 deaths would have been expected each year, but because cycling was used as a typical means of transport, the number of annual deaths was reduced by 12.28 to 39.87.

While the risk of road injury and air pollution exposure rose slightly among Bicing users, it was offset by a vast improvement in overall health among members.

Additionally, the annual reduction in carbon dioxide emissions resulting from implementation of the Bicing initiative in Barcelona was estimated to be 9062 metric tonnes.