Student Coops: the Cutting Edge of the New Economy - Shareable
Skip to content 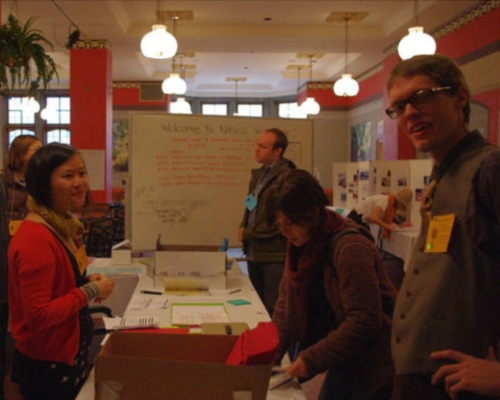 While pundits debated failing macro-economic strategies in the media frenzy surrounding election day, students at NASCO Institute shared proven community-driven economic solutions, from coops to alternative currencies. Unlike the discourse on TV, it was realistic yet often passionately idealistic and led by determined college students at the cutting edge of new economic theory and practice.

On November 2-4th, 400 student cooperative members and other students gathered in Ann Arbor to attend NASCO Institute, “Cooperating to Survive and Thrive Beyond Capitalism: Building a Solidarity Economy.” The conference took place at the University of Michigan where 20 student cooperative houses and an Inter-Cooperative Council thrive with more than 600 residents. The common threads in the workshops were radical inclusion and cooperation, even amongst cooperatives.

Students coming mostly from the Midwest and East of the continental divide attended workshops such as “Deep Listening,” “Co-ops and the New Economy,” “Creating Community Agreements,” “How Can Your Co-op Support a Local Food Economy,” and “Room for Inclusion: Reaching Out for Diversity in the Co-ops.” I helped teach a workshop on the solidarity economy and led another on community currencies. The high quality of the workshops and the advanced knowledge of the student participants made it one of the most enlightening and useful conferences I've been to — and most were led by youth themselves.

The students generally agreed on an emerging new economic framework based on sharing and equity, as well as radical inclusion to participate in this new economy. Outside of the workshops, students attended caucuses for people with disabilities, people of color, white allies, working class, owning class allies and queer and transgendered people. From talking with students and attending a caucus myself, I was encouraged that NASCO and the student coops are at the cutting edge of diversity work and theory. The undercurrent being that inclusion means listening to, understanding and working from the unique perspectives from the oppressed (i.e. all of us) to create radical inclusion, liberation and equity for everyone. A solidarity economy for all!

I was moderately surprised to hear that women at the student co-ops felt they had a ways to go toward gender equity and that there was sadly no gender caucus to discuss it, but one workshop did address gendered labor in co-ops. It was also the first time I heard nonviolent communication described as a communication tool that can be oppressive to those who don't share that communication style. This came from the Aorta Collective, a nonprofit that teaches communication skills.

The different kinds of ableism discussed in a workshop on disability deepened my understanding of my own experience as a person living with chronic illness. “Super Crip” ableism was described as the sentiment “you are so amazing for living!” which is condescending to someone who doesn't have a choice about their disability. Many workshop presenters impressed the point that the oppressed are not solely responsible for educating and advocating on their behalf, as it's an added challenge to take on, and being an active ally is really important to the social justice movement.

NASCO has obviously put a lot of effort into developing a new generation of thoughtful, progressive leaders, incubated in the experience of cooperative living. My experience at NASCO Institute made me realize that it's important to start giving youth cooperative experiences from an early age to go against the mainstream current of economic competition and exclusion. On the agenda for the conference was playing “Co-opoly,” a new game to teach cooperation. Modeling a sharing economy in the way you live, work and play and engaging youth in it could be the most important thing you do.

Overall, the strategies proposed emphasized inter-cooperation – alliance-building among parts of the solidarity economy, social justice and environmental movements, especially in supporting co-ops. If we support each other, we’ll be stronger together.