Get on the Bus! Youth Lead New Economy Movement at Upcoming Convergence - Shareable
Skip to content 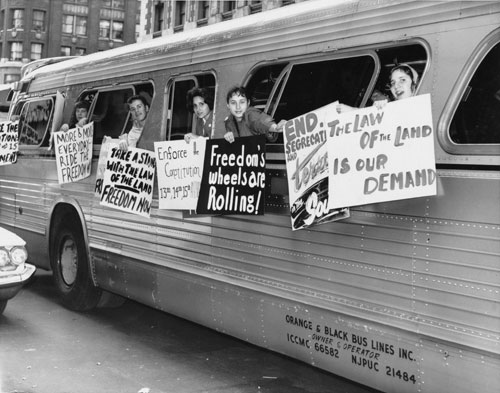 Occupy helped lift the veil on the myth of our economy. Are you ready to help change it? Get on the bus to join Shareable and the New Economics Institute for an inspiring and empowering weekend of radical economic transformation at the reRoute Convergence on July 19-21 in New York City.

Youth are no longer buying the go to school, accumulate debt, and get a career sales pitch – it just doesn't add up to happiness or prosperity anymore. The middle class is becoming poorer with less security, yet working harder than ever and becoming ever more depressed. Mother Earth is being rapidly destroyed, subjugated to profit above all other values. All in the name of the economy. The economy is supposed work for the people, not people slaving for the economy. This old economic paradigm was developed as a way to accumulate wealth for the few while exploiting the many.

But there's a new economic paradigm already sprouting up from the grassroots – the economy by and for the people (yes, that's you!). It goes by many names – the new economy, solidarity economy, sharing economy, green economy, economic relocalization, and economic democracy. And it's manifesting in infinite forms in communities across the country, from simple farmers markets to participatory budgeting, coops and community currencies. It's based on caring community, relationships and trust and grounded in principles of oneness, democracy, equity, social justice and sustainability.

You might be asking, “What does this have to do with me?” and “Why don't I just turn on my favorite HBO series or go on vacation and forget about it?” Because the new economy is a lot more fun, it's deeply meaningful and will bring happiness and security. And if we don't change the economy, your life and that of those your love will likely be painfully hard, chained to debt and worrying about your precarious future.

Do you ever wonder what your community would look like if the profit banks made off the hard earned interest you pay them was reinvested into your city's renewable energy, healthcare, or parks? Or if you got to directly decide where your taxes go, like better bike lanes or free public education instead of corporate handouts? What if your community produced it's own currency that could stimulate cooperative jobs with purpose? What would our culture be like if people shared their abundance and the things they treasure instead of hoarding them in isolation?

All of this is actually possible. Solutions like this are already working in communities around the world and you can bring them to your community. We really need your help to scale up this new economy movement if we are going to have a chance to change the current course of driving civilization over the cliff. Yes, it's that critical. And young adults of this generation in the US are the best poised to do something about it, with their energy, boldness and connectedness. Do you want to passively watch the economy continue to unravel or be a radical agent of change in this historic moment? I don't know about you, but I'm in!

Here's a peek at some highlights of this awesome weekend:

Sliding scale admission down to $15 is only until July 5th so get your ticket now. Some housing assistance and travel scholarships are still available. Sign up for the revolution today!