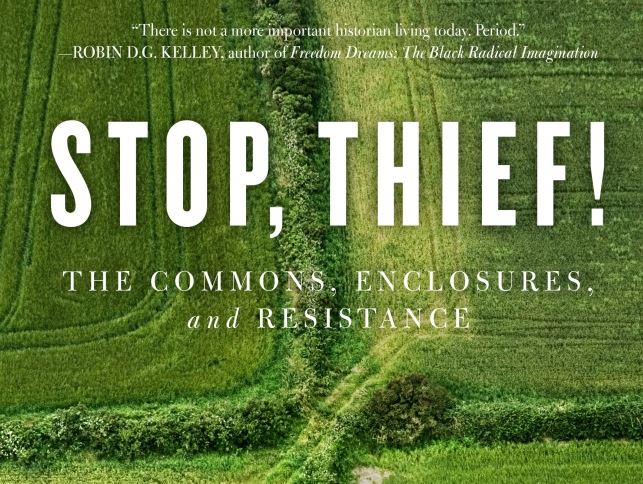 It is always refreshing to read Peter Linebaugh’s writings on the commons because he brings such rich historical perspectives to bear, revealing the commons as both strangely alien and utterly familiar. With the added kick that the commoning he describes actually happened, Linebaugh’s journeys into the commons leave readers outraged at enclosures of long ago and inspired to protect today's endangered commons.

This was my response, in any case, after reading Linebaugh’s latest book, Stop, Thief! The Commons, Enclosures and Resistance (Spectre/PM Press), which is a collection of 15 chapters on many different aspects of the commons, mostly from history. The book starts out on a contemporary note by introducing “some principles of the commons” followed by “a primer on the commons and commoning” and a chapter on urban commoning. For readers new to Linebaugh, he is an historian at the University of Toledo, in Ohio, and the author of such memorable books as The Magna Carta Manifesto andThe London Hanged.

Stop, Thief! is organized around a series of thematic sections that collect previously published essays and writings by Linebaugh. One section focuses on Karl Marx (“Charles Marks,” as he was recorded in British census records) and another on British enclosures and commoners (Luddites; William Morris; the Magna Carta; “enclosures from the bottom up”). A third section focuses on American commons (Thomas Paine; communism and commons) before concluding with three chapters on First Nations and commons.

This sampler reflects Linebaugh’s eclectic passions as a historian. They are united by the overarching themes of commoning, enclosure and resistance, as the subtitle puts it. This framework makes for some unanticipated historical excursions, such as the chapter on the theft of forest products and abolition of forest rights in 19th century Germany, which made quite an impression on Karl Marx. Another chapter — Linebaugh’s foreword to E.P. Thompson’s book on William Morris — situates Morris as a communist, artist, prophet and revolutionary.

Some of the historical explorations journey into areas that are frankly obscure to me, so I don't always appreciate the fuller context and circumstances. But this is part of the pleasure and fun — to be introduced to new areas of commons history. Linebaugh describes a host of historical commons that have receded into the mists of history:

“the Irish knowledge commons, the agrarian commons of the Nile, the open fields of England enclosed by Acts of Parliament, the Mississippi Delta commons, the Creek-Chickasaw-Cherokee commons, the llaneros and pardos of Venezeula, the Mexican communidades de los naturales, the eloquently expressed nut-and-berry commons of the Great Lakes, the customs of the sikep villagers of Java, the subsistence commons of Welsh gardeners, the commons of the street along the urban waterfront, the lascars crammed in dark spaces far from home, and the Guyanese slaves building commons and community….”

I only wish that some of these passing references had been elaborated upon; they conjure up exotic lost worlds unto themselves.

It is fitting that the concluding chapter explores the “invisibility of the commons” — our problem now, as then. Linebaugh notes how such astute minds as George Orwell, William Wordsworth and C.L.R. James failed to see the commons as commons in their times. Since then, scholarship has helped to illuminate the importance of customary rights, of grazing commons, and of indigenous commons, notes Linebaugh. “What is gained from seeing them as commoning?” he asks. “An answer arises in the universality of expropriation, and a remedy to these crimes must be found therefore in reparation for what has been lost and taken.”