Coming Soon: Who Owns the World? - Shareable
Skip to content 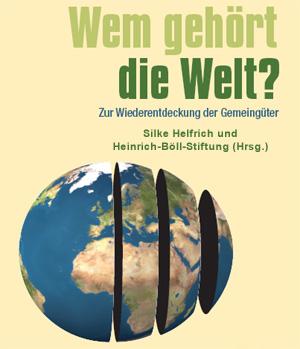 The commons is a new way to express a very old idea—that some forms of wealth belong to all of us, and that these community resources must be actively protected and managed for the good and all.

International interest in the commons has been growing for years, spurred in no small part by new books like this latest one from Germany: Who Owns the World? The Rediscovery of the Commons, was published earlier this year by oekom Verlag in Berlin–and will soon be published in English.

Silke Helfrich, the editor of the book, who formerly headed up the Heinrich Boll Foundation’s office in Mexico, is a leading thinker and writer about the commons. She also blogs about the commons (in German) at Commonsblog. In November 2006, Helfrich hosted a major international conference in Mexico City, “Citizenship and Commons,” which focused on the commons in Latin America and inspired the creation of this book.

Who Owns the World? has been well-received since its launch in March. For those who can read German, a website about the book – with ordering information — can be found here. A free download of the book – under a Creative Commons Attribution-NonCommercial-No Derivatives license – can be found here.

A slightly different version of this piece originally appeared in On the Commons.

On the Commons (OTC) is a commons movement strategy center founded in 2001. Through our efforts, we help:Build and bring visibility to the commons movement;Initiate and catalyze commons work; and,Develop

On the Commons (OTC) is a commons movement strategy center founded in 2001. Through our efforts, we help:

We believe it is possible to foster a commons-based society, which refers to a shift away from our market-based system, through new, collaborative ways of working.