When I put a Free Stuff box in the laundry room of my apartment building on the Upper East Side of New York City, I wasn't thinking about the bigger idea of holding a live swap event with the neighbors, and what that could mean for us as a community. I was simply focused on how much waste we could reduce by swapping gently used articles, silently, anonymously via a 3' x 2' x 2' box. Perfectly decent stuff would be intercepted before it hit the trash by neighbors, housekeepers, and building staff. And I would feel good that I made it all happen. Then a light bulb went off in my head.

Although a Free Stuff box helps people save money and enhance economic resilience, when it's turned into a live swap event, all kinds of social benefits kick in. Some of this is already happening at free Stop 'N' Swap reuse events in the city. It's exciting to think about the potential of these events in promoting sustainability, especially in underserved neighborhoods.

Stop 'N' Swap is a Zero Waste Program of GrowNYC, which is funded by the New York City Department of Sanitation. Started in 2011, the organization has been so successful, with 45 events are planned for this year and more slated for next. Many of these events take place in low-income housing areas. For three hours people pile in with their overstuffed shopping bags while others peruse what their neighbors have brought in and take their newly found treasures — there's no limit to how much people can take and it's all for free. 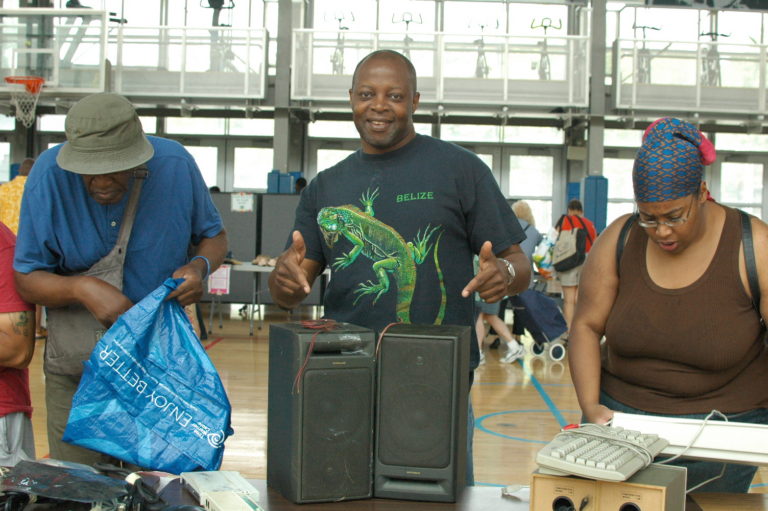 The folks who run the Stop 'N' Swap greet, weigh, sort, hang, display, and eventually help pack all the items. I visited my first Stop 'N' Swap on a weekend this March. It was held in the cafeteria of the Harlem Children's Zone, a not-for-profit located in one of largest underserved areas of the country. Kathleen Crosby and Victoria Dearborn, who manage Stop 'N' Swaps and their small army of 15 volunteers, welcomed me to the event. Women (mostly) arrived with bags full of clothing, shoes, toys, DVDs, CDs, books, and other items. Everything flew off the tables as soon as they were restocked. Some items still had tags on them, like the little pink knitted hat I picked up for my granddaughter. One middle-aged woman excitedly snatched up a brass menorah — she claimed it was her first. Another swapper found several items she intended to pass along as gifts to neighbors and godchildren.

Amidst all the swapping and smiles I couldn't help but wonder about the many ways that a community-based swap event like this one, with a little tweaking, could do to promote sustainability even more in a cost-effective manner.

Is it possible that more swap events could be run in low-income neighborhoods where they are so sorely needed? What about focusing events on single items, like children's clothes and toys, kitchen items, or possibly just food, making it that much easier for folks like busy moms to find stuff of value?

And while we're thinking big, why not include 'skill swap' tables where folks could teach each other their knitting, cooking, sewing, fixing, DIYing, painting, and other skills that could empower folks to be more independent and economically resilient? (Stop 'N' Swaps meet Repair Cafes, anyone?) Teaching each other to repair stuff also promotes social connections. Serving refreshments help builds community, too.

I was delighted to learn from Crosby and Dearborn that they and others at GrowNYC are being asked to share their best practices with individuals, schools, and community organizations looking to host their own swap events. When more neighborhoods set up community swap events of their own, it unleashes a flood of creative ideas as they customize their events to local needs and culture.

Mountains of gently used items seem to exist everywhere these days. With a little luck, swapping stuff — and sharing skills and stories over a cup of coffee — could one day replace shopping as a national pastime. And to think that can all start in a humble cafeteria like the Stop 'N' Swap I attended or in a laundry room with a Free Stuff box.

Live in or near New York City and want to attend a GrowNYC Stop 'N' Swap event? Click here for a calendar of upcoming events and contact information. Jacquelyn Ottman is a green marketing expert and author and the founder of WeHateToWaste.com.

Jacquelyn Ottman is a respected advisor to industry and government on green consumerism and the author of five books. An ardent advocate for her native NYC's Zero Waste goals, she

Jacquelyn Ottman is a respected advisor to industry and government on green consumerism and the author of five books. An ardent advocate for her native NYC's Zero Waste goals, she is on a mission to change consumption culture. She is the founder of WeHateToWaste.com, an online and offline forum with the goal of defining a resource-efficient lifestyle that consumers would willingly embrace. Ottman serves on the Executive Board of the Solid Waste Advisory Board to the Manhattan Borough President, and is the first person in New York City to be certified as a ‘Zero Waste Business Associate' by the US Zero Waste Business Council.

Ottman facilitates interactive 'WasteLess LiveBetter' workshops for engaging New Yorkers in positive conversations about waste reduction, consumption culture change, and aligning with the City's OneNYC 'Zero Waste to 30' Plan.  Since 2015, she has addressed various corporate, government and not for profit groups including the Manhattan Solid Waste Advisory Board, Etsy, Sierra Club, Society for Ethical Culture, and Community Board 8.

Her books include:  "The New Rules of Green Marketing: Strategies, Tools and Inspiration for Sustainable Branding" (Berrett-Koehler, 2011) and "How to Make Credible Green Marketing Claims: What Marketers Need to Know about the FTC's 2012 Green Guides" (Advertising Age, 2013) (co-author).