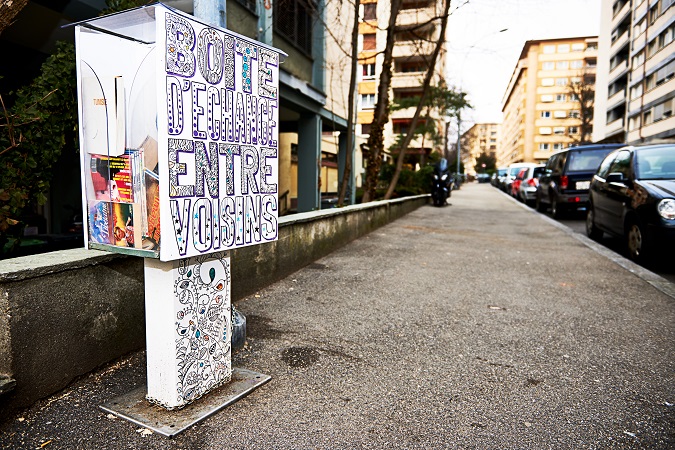 On street corners throughout Switzerland, colorful painted boxes the size of a pay phone booth declare: BOÎTES D’ÉCHANGE ENTRE VOISINS. A box for exchange between neighbors.

Part art project and part social experiment with a dash of scavenger hunt, these neighborhood exchange boxes host an ever-changing catalog of free items: a panda lunch box, a plastic colander, toy trucks, a circular cat toy, a nylon backpack and, of course, stacks of books. Passers-by can post that day's findings in their local box and tag it on Twitter with #hclbox. Since the project started in 2011, neighbors in Geneva have exchanged 32 tons of free goods.

Happy City Lab founder Dan Acher got the idea for the boxes from the yearly clearing of his apartment in Geneva — he would watch from the balcony to see people pass by and take home his old things from the street opposite his building. The Neighborhood Exchange Box was born.

Now, the experiment has turned into a string of more than 60 boxes across Switzerland, with plans to expand to cities in nearby France and other countries around the globe. Acher found that his box experiment was part of a larger sharing movement, like with gratiferias in Spanish-speaking countries. A hyperlapse video from Happy City Lab of one exchange box on Rue Du Clos in Geneva shows dozens of people stopping at the street corner, picking through its contents. Check out the video below to see the comings and goings of this busy little box in a single day (no spoilers but keep an eye out for the surprise around 1:30 p.m.).

A Day In The Life Of A Neighbourhood Exchange Box from Happy City Lab.

Over the course of the day, at least 69 people visit this one box, some striking up conversations and others tucking books and other items away in bags for later. At one point, a woman takes everything out of the box and reorganizes it, arranging the books and stacking other items neatly in the box. "This type of role just appears," Acher said via email. "People simply start to take care of the boxes."

Since individuals build and maintain each box, the Neighborhood Exchange Box DIY guide provides step-by-step instructions for new box construction, including specifications for building the box itself, so they can maintain a uniform design. Each box is then decorated with UV-resistant decals created by a local designer, often the winner of a box design contest. New box owners can snap a photo and geo-tag the box's location on the site's Google map that plots the locales of all the boxes currently up. Acher said the size and design were chosen at first out of convenience (Acher's first box was an old newspaper rack) but their size encourages the exchange of smaller objects, which prevents the boxes from turning into fancy garbage cans or, worse, dumping grounds for furniture or other large items that are difficult to discard. 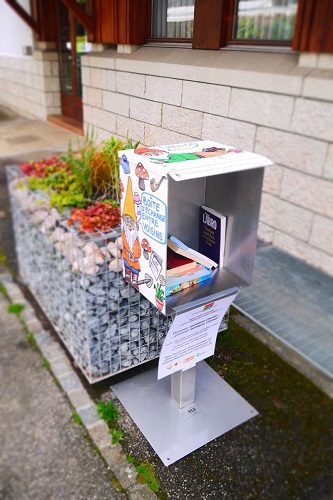 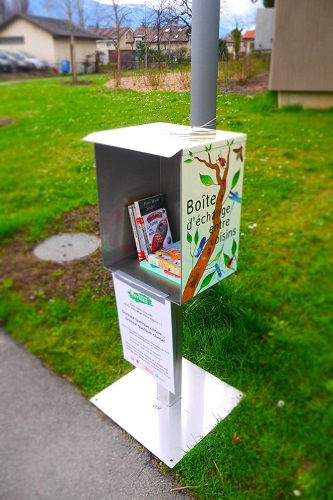 Acher estimates each box reaches neighbors in a 200-meter perimeter, or about a two block radius. He calls these sites "non-places" that transform once a box is placed there. "They don't exist as places, but by installing a box we give them meaning and they start to live," he told Radio Télévision Suisse. Placed in locations previously used simply for passing through, the exchange boxes can turn these unused spaces into new places for lingering and interacting.

At its simplest, the box can be a independent swap shop for goods to be reused by others. On a deeper level, a box can invite neighbors into conversation to foster values like altruism and ecology, Acher says. "The effect of an exchange box on a street corner goes far beyond just people trading stuff: people see that the box is working, that it is respected. This in turn changes the perception they have of their neighbors, their neighborhood and their city. And that brings a renewed sense of security and community."