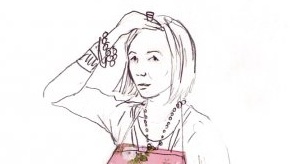 When I tell Europeans I am dating an “American Joe,” I am not only speaking in cultural cliché. My boyfriend’s name is Joe, and he is about as “American” as they come. He is tall and milk-and-steak-fed, has at least one polyester sports jersey, hails from Connecticut (small-town, not New York suburban), can eat an unlimited amount of BBQ chicken wings, is a fiercely Catholic mix of Irish and Italian, and says, “Whaa?” instead of “What?”

We seem to be as different as it gets: one resolutely Old World, the other decidedly New. This is your cue to ask what we’re doing entangled with one another. As with most relationships, the answer is jumbled and complex, but for us, it has something vaguely to do with food. Food plays a large part in our relationship. We are both mealtime enthusiasts, shuddering at what we assume to be the frigid sexual habits of picky eaters— the cut-off-the-crust set— and falling asleep dreaming of what we’ll have for breakfast.

It started when Joe got a television job and I was working from home, labeling my officelessness modern and “mobile.” I was a graduate student, which meant that besides going to class, my work consisted of reading and writing, which I accomplished in bed or at my desk—two feet from the bed. I was also writing reports for an internship with a literary agency and blogging in my role as co-founder of The Lattice Group, a non-profit organization aimed at researching and spreading dialogue about work-life balance issues with a Generation Y focus— occupations that mostly entailed solitary work from my location of choice. Again, this location was my studio apartment. The result was that Joe had to be at an actual desk at a specific time, while I could stay in my pajamas much of the day. Ergo, I became the breakfast-maker.

I set the table while Joe showered. Then I served tea, cereal, eggs, fruit and toast. A couple of times a week I fried eggs and bacon that I dished onto his outstretched plate. Before he headed out the door, briefcase in hand, he would kiss my ruddy, unwashed cheek and give my bathrobed bottom a friendly pat. Unsurprisingly, I began to feel like a 1950’s housewife. Joe knew I was working, and hard at that. But I caught myself rationalizing that his workday must be more important simply because it was spent in an office. It was over breakfast that my spiral of self-doubt began.

Because I’m not hot-headed like Joe (the Irish, the Italian), I did not yell out my discontent. Instead, in good Scandinavian fashion, I began to harbor steady and simmering resentment. The more I brooded, the more likely it became that I was somehow, inexplicably, back in my bathrobe by the time Joe came home from work—usually no later than seven pm.

“It’s like you never left bed!” He would exclaim, beaming.

“Chauvinist! Oppressor!” I would think, glowering.

There I was, reduced to the dark corners of a hackneyed male fantasy: the devoted woman, perpetually half-dressed, waiting to serve her man at his every request. Just like that, it was as though I had never been dressed, never gone to class, never written that article. What was even more unnerving is that besides making breakfast, I began to have dinner prepared by Joe’s arrival. I set the table, complete with tablecloth, napkins and candles, and then scowled away the meal.

“How was your day, honey?” He’d ask cheerfully.

“Well, I’m working on this new series and…”

There he was, my American Prince Charming, the black-locked fellow I’d snared for my heart. Though I’m genuinely interested in Joe’s professional accomplishments, all I could hear as I stared at his moving mouth across the dinner table was the steady rumbling of my growing resentment. When I scrubbed out the frying pan for the hundredth time I wondered: how the hell did I get here?

I’ve spent a great deal of time entrenched in the issues that arise when people try to balance their professional and personal lives. For The Lattice Group, I interviewed over one hundred Generation Y-ers in five countries about their fears and hopes for future work-life realities. Along the way, I learned quite a bit about lingering traditionalism, which I, quite naively, thought our ostensibly post-post-feminist generation would all but snuff out. Turns out, age-old gender roles are still imprinted on the minds of many of my peers. But I’m different. I’m from Sweden, the world’s number one egalitarian hub. I’m enlightened…right? I’ve blogged about the virtues of shared domestic responsibilities and female economic independence. I’ve railed against the unjust status quo that forces men into ceaseless work with no allowance for private life. Hail partnership! Down with outdated gender roles! After dragging gender issues into every innocent dinner conversation, my friends have dubbed me the Work-Life Police. How, then, did I end up a passive aggressive woman washing dishes in a bathrobe?

My first instinct was to blame my American Joe. After all, the American traditionalism I had discovered on my travels seemed to be playing out at the breakfast table: the small, progressive Swede (that would be me) was succumbing to the coercion of the big-gun American traditionalist (that would be Joe). I knew Joe was raised to expect a groomed housewife— something he admitted early on in our relationship— and here I was, giving it to him. In my bathrobe I wasn’t groomed, exactly, but I was certainly in the house.

What I hadn’t anticipated was that several years of dating me had achieved what lady’s magazines around the world claim impossible: my man had changed—his mind, at least. My insistent Swedish egalitarianism had not only gotten Joe excited about paternity leave and dual-earner households in an abstract sense. His work-life radar had been so sharpened that he could spot a Revolutionary Road before it was fully paved. And he didn’t just brood over it, like his liberated Swedish gal, he actually did something about it.

Enter the meatballs. After about a month or so of me playing the resentful housewife, Joe began to insist that he cook dinner. He wanted to try out his new cookbooks, he said. The next day he dragged out the food processor his mother had given him for Christmas. I eyed the appliance suspiciously. Was his comely offer a trick to push me into some new depth of domesticity?

Happily, a safe distance was (and still is) maintained between the food processor and me. Joe wanted it all to himself. He tied an apron over his dress shirt, deposited his cufflinks on the counter, rolled his sleeves over his elbows and got to work. I watched with fascination as Joe fed meat and onions into the growling machine. He was making meatballs, he announced proudly. Italian style, not Swedish. While my Swedish meatballs are small, fried and served with potatoes, Joe’s are soft, boiled in a red sauce and poured over spaghetti. I used to dismiss Italian-American meatballs off-hand, claiming the Swedish variety’s superiority (the way we self-satisfied Swedes tend to do about a lot of things, by the way). Maybe, just maybe, I’d been too quick to judge.

Somewhere on our way from Swedish to Italian meatballs, I realized that my boyfriend hadn’t made me into my own worst nightmare, I had. While falling in love with Joe, I had appropriated the things I thought he expected of a mate. All of my preconceptions of what the stereotypical American Joe looked for in a girlfriend were making me forget what my American Joe looked for in his. What I should have known is that when Joe fell in love with me, he was falling for the second half of the Swedish Girl definition, the unfettered socially liberal part, as much as the wink-inducing one. He may have been raised to expect a housewife, but he had grown into a man who sought an independent partner. If not, he would have been mad to throw himself into cahoots with a public gender equity activist in the first place!

And still…I can’t help but wonder. Did I really take on a traditional female role because I thought it was the way to win my American man’s heart? The truth scares me: unprompted, I had insisted on making breakfast, I had scurried about to have dinner ready by his arrival in the evenings, and I was making myself painfully available for his needs. Could it be that there is some part of me, however deeply buried and carefully quelled, that secretly yearns for a feminine role that I intellectually reject? Am I really less egalitarian at heart than I would like to believe? It’s frustrating, not being able to stereotype even myself with any certainty.

There’s another dimension to our story that I’m still trying to tease out. It has to do with the fundaments of sharing. Sharing is built on trust. Trust that if you give something, you will receive something in return— perhaps not immediately, but at some point. Mix that up with social and personal expectations, and putting your trust into a reciprocal relationship, whether it is a romantic partnership or not, can be scary. The Betty Draper in me seemed to fear sharing because I thought shouldering all the home stuff was expected of me. But I may also have been scared that if I demanded we share, my partner would reject the idea, or come up short. When you share, there is the inevitable a risk that one party will take advantage of the other. When you put bigger things on the line than who cooks what, such as sharing monetary resources or responsibility for your kids, that fear just gets more real. Probably, it is the risk intrinsic to sharing that makes people resource-hoarders.

And let’s not forget that sharing compromises ownership. As the House Goddess, I reigned supreme over the domestic sphere. It was embittering, yes, but to some extent also empowering. When Joe stepped up and gently, but firmly, pushed for more equal householding, I lost that Goddess role. I had to share it.

But, as tends to be the case with sharing, if the relationship is based on reciprocity and trust, it’s almost always preferable to hoarding. The result for me and my American Joe was not just that we started sharing chores. The agreement that we could and would share deepened our relationship in much the same way that two neighbors who share gardening responsibilities or car pooling shifts become more connected with each other and their community than when they operate as discrete, isolated cells. Sharing demands trust, yes. But sharing also means connecting, and deeper connections lead right back to heightened trust. And trust, well trust is something we, as romantic partners or simply as citizens of the world, can’t do without.

So, where does that leave us? I still make breakfast. And Joe still pats me on my bottom before leaving for work. But now, most of the time, Joe makes dinner. Sure, dinner is served an hour or so later, but what does it matter? It gives me time to cradle a glass of wine and gaze on those things that make my American Joe so irresistible. Sometimes I still only wear a robe. But now, it has nothing to do with resentment.