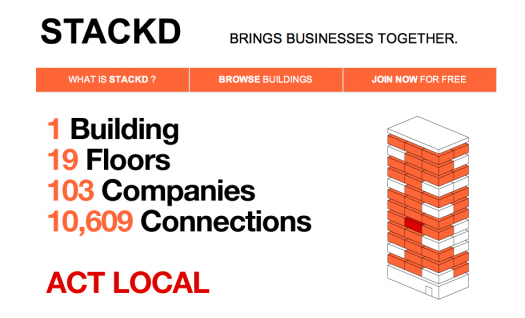 Unlike other hyperlocal sites, however, STACKD engages people where they earning a living. While the purpose of STACKD is to encourage sharing in a general sense – for instance to share conference rooms, have lunch, or pursue joint projects – I suspect its long-term success will come from how helps people succeed at work.

STACKD could likely amplify the benefit that firms in the same value chain gain by congregating in same area or even building. A classic example of this benefit is the Brill Building in Manhattan. It was a center of the music publishing industry for decades beginning in the big band era. It became a veritable hit factory in the 50s and 60s.

Carol King, Neil Diamond, Phil Spector, Burt Bacharach, and Paul Simon all got their start there writing hits in tiny cubby holes with just enough room for a piano. This was a tight knit group though working with different teams and firms. The collaboration and competition among songwriters made it a creative pressure cooker and likely accounts for the tremendous success of Brill Building artists, whose work during this period became known collectively as the "Brill Building Sound."

The Brill Building phenomenon was something of a historical accident. The building was built for bankers just before the 1929 crash but instead became a center for music publishing. Nowadays people are consciously trying to design building office environments that foster success. Hub Bay Area and Hub Culture come immediately to mind. Their intent is to host a collection of social enterprises whose sum is greater than their parts. And they take the whole idea aggregating a value chain in the same building to the next level with online collaboration tools, shared services, community events, and even their own currency.

STACKD is a cool idea with similarities in form to the hub’s "sum is greater than the parts" approach. But I have to ask myself, to what end? I hope STACKD takes a cue from the hubs and targets buildings occupied by social enterprises. The commons does not need more effective advertisers, PR firms, lobbyists, or extractive industries. What we do need is thousands of Brill Buildings for the social sector regularly churning out social enterprise smash hits.