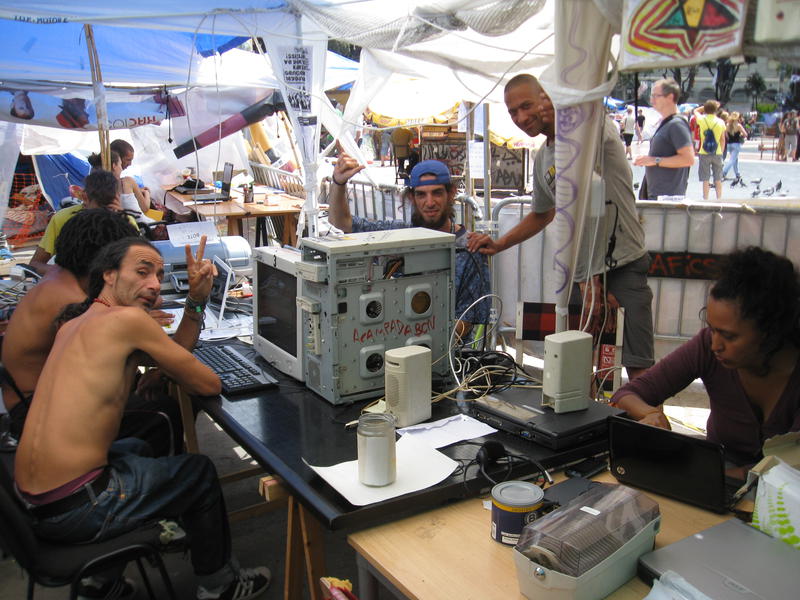 It’s two in the morning on Monday, June 20, and 1000 Indignados are still in the plaza, dancing, drinking, and watching Youtube videos of the day’s protests in Athens, Madrid, Lyon, and elsewhere on the camp’s projector screen. It is a well-earned celebration. The Spanish media is reporting between 100,000 and 150,000, but the Pirate Commission (Placa Catalunya’s resident hackers) have crunched the photographs, and are reporting that 275,000 people took the streets of Barcelona today. To put that in perspective, Barcelona’s greater metro area has a total population of three million. At the height of the march, around 6 in the evening, protesters filled the streets all the way from Placa Catalunya, the march’s starting point, to Pla de Palau, its end; a wall of protestors two miles long. Around the globe, early estimates predict that five million people took to the streets today in solidarity.

After two weeks of rain, conflict, delay, and media blow-back, this is a major victory for the Barcelona Indignados. They have led a global day of protest larger than any seen since the 2003 lead up to the Iraq war. There are weeks, months, even years of hard work and struggle ahead, but tonight, the men roaming the square selling one Euro beers and samosas are doing brisk business. Cigarette smoke hovers in the air, the leaders behind the commission desks are smiling for once, and couples sneak off to the tents for a little privacy.

What makes this even more incredible is that planning for today’s actions began only two weeks ago. The protests were coordinated to coincide with Monday’s EU vote on Euro management for the upcoming year. I have to repeat myself here: five million people were mobilized world wide in two weeks. 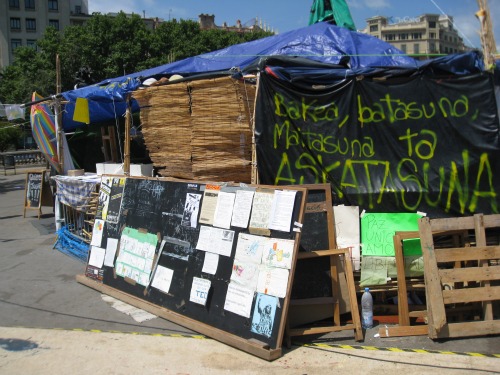 The 15 May movement caught most everyone by surprise. The Spanish millenials had been dismissed as apolitical and apathetic, certainly incapable of starting a movement of mass revolutionary consciousness. But change was coming. In the early days of the fiscal crisis, Spain’s Creative Commons community politicized, expanding their mission away from the internet and towards social change. Abortive youth protests in 2009, and intensive online political discussion had many involved in the Spanish free culture movement expecting something to happen. But no one expected this.

It’s been a little over a month since the Facebook-organized protest on May 15th that defied all expectations and led to the founding of the camps, but everything has organized with incredible speed. It began with 40,000 more or less strangers refusing to leave Placa Catalunya. On May 17th, ‘Commissions’ were formed to solve individual problems within the camp. For the next couple of days, these were basically groups of six or seven people, sitting in a semi-circle in the middle of the square or under improvised bivouacs, talking. Now, a month later, there are 18 commissions, all with their own tents and booths. And not just the clearly necessary action, communication, and infrastructure commissions, there are also commissions of agriculture, health, even theater. At first, the entire camp held a general assembly once a day. Now, commission representatives hold public meetings three times a week to discuss the progress made by their groups and plan actions for the camp moving forward.

On May 15, protesters slept on the ground, if they slept at all. By the 20th, camping tents, toilets and tarp covers for a couple commissions were up. Today, there is a play room for kids filled with donated toys, a people’s library, a free store for clothing, and a massage and meditation tent. The camp has power (electricians hacked them into the grid, and there are donated back-up generators), internet (the Pirate Commission have built and provided private servers), even printers, scanners, and all variety of audio visual equipment (provided by the A/V Commission, naturally). When I arrived two weeks ago, the plaza was covered in beer and wine stains, and garbage littered the square. Now, they sweep and mop three times a day, and campers walk around picking up garbage regularly.

The camp feels magical, but it’s also totally jerry-rigged, improvisation built upon improvisation; tape, string, tarp, cloth, metal tent poles holding up a sagging canvas roof, plastic sheets propped upon three long bamboo rods taped together. A truly massive storm could take the whole thing down – but can’t the same be said of the status quo? This camp, if joined by enough like it around the world, could be that storm. 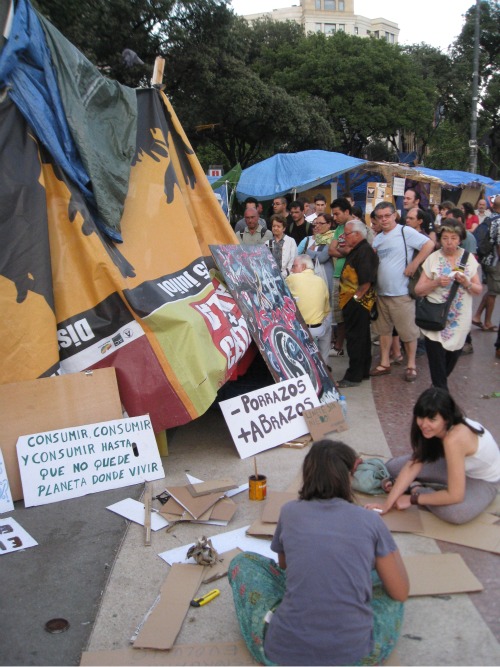 Today was a massive success: The protests were completely peaceful, and were so large that the US media actually took notice (even if they claimed Los Indignados want “economic reform” rather than revolution). A movement that is built so fast feels precarious; the fact that it appeared so quickly makes its sudden disappearance seem equally plausible.

I have no idea whether they will succeed, or, if in doing so, what kind of a world they would build. They are learning and organizing at an incredible rate, and though they do not share an ideological worldview (beyond a total dismissal of political parties, politicians, bankers and police), they have a functioning praxis of all-inclusive participatory democracy. Ideology, decisions and actions are built everyday from the ground up.

Most of the people here in Placa Catalunya are hungry, all of them are exhausted, and they’re smoking way too many cigarettes. But they are happy, creative, inspired, committed, and, most importantly of all, living free lives. It sure seems like they’re not leaving camp anytime soon. Who would want to? 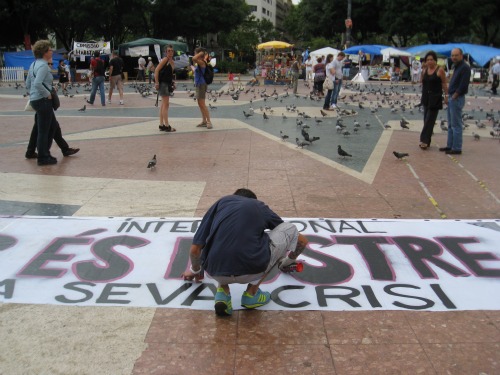