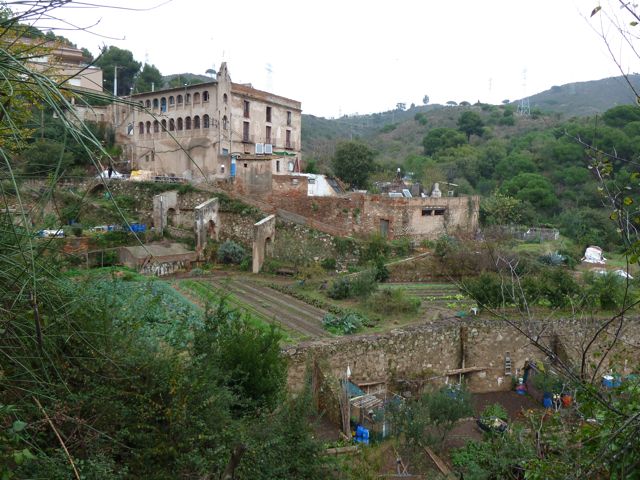 On a recent trip I took to the countryside north of Barcelona I stared out the window of our economy car and wondered at the quantity of chabolas (shanty towns) that had sprung up on the hillsides along the AP-7 highway. Had there always been so many? Or was it just that I was noticing more of them now that autumn had swept summer’s foliage from the trees? There they were, spouting smoke from makeshift stacks, pathetic hovels consisting of scavenged slabs of metal, old boards, tires, tarps. It was a stormy day, and I imagined pools of rainwater collecting in and around these homes.

Everyone needs a place to stay, but paying rent in Barcelona is hard for a lot of Spaniards due to the economic crisis and country's 20 percent unemployment rate. It’s hard to pay down a mortgage if you’re suddenly out of work, a situation some Americans know all too well these days. The difference is that in Spain when homeowners can’t make their payments, the bank takes the house and the once-owner keeps all the debt. The unlucky individual is rendered jobless, homeless, and a good €200,000 in the hole. Many see this deal as abusive, and organizations like Plataforma de Afectados por la Hipoteca (PAH) protest and have managed to stop more than 100 evictions since 2010. Still, about 300 families a day lose their homes across the country.
While PAH takes to the streets in protest, Okupas take to the many empty buildings. “These days with the housing crisis they estimate that there are 80,000 apartments standing empty in Barcelona,” says Iñaki García García of El Local, an alternative bookshop in El Raval connected to the Okupa movement. While Okupas move into buildings for many reasons, bringing awareness to the Spanish constitutional right to housing is a big one. 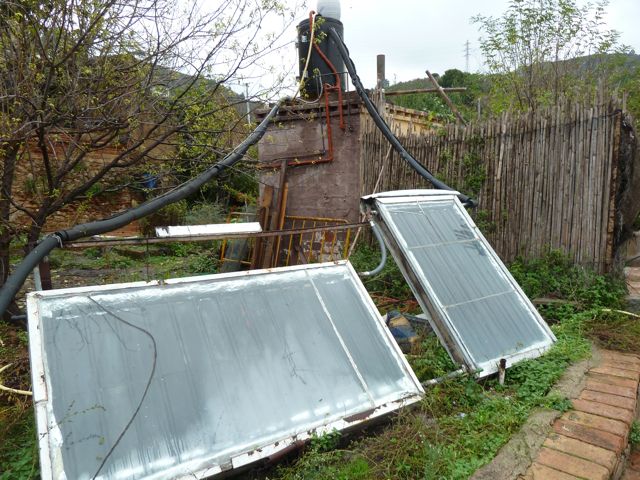 ‘Okupa’ comes from the word ‘Occupy’ in that Okupas occupy vacant buildings in the city and countryside in Spain and in many other European countries. Basically, Okupas are squatters. Spanish mainstream society paints the picture of your typical Okupa as a dreadlocked trust-funder, rebellious druggies, lazy, problematic. While some of these adjectives fit depending on the Okupa, they certainly do not apply to everyone in the movement, which has been thriving in Barcelona since the 1980s.

What cannot be disputed is that occupying a building is against the law. Okupas break into buildings that are bricked up and blockade themselves inside to take control of them. From a property owner’s viewpoint, having Okupas in your building could be really annoying. The legal process involved in removing Okupas is complicated and lengthly. While in some rare instances, Okupas take over homes which are being used by the owner, in most cases the buildings belong to a bank, the Church, the State or one of Barcelona’s wealthy families (such as the Güells) with multiple properties. Many of these targeted buildings have been vacant for years, prey for negative activities such as prostitution, crime, and drug use. These days most Okupa buildings belong to banks, leftovers from the many developers that went bust when the bubble popped.

The more desirable the property, the greater the likelihood that the Okupas will get kicked out. Expert Okupas look into these factors before inhabiting a building, as the constant prospect of getting the boot is stressful, not to mention the legal problems associated with squatting. While occupying buildings in Spain could land an Okupa in jail for six months, no one has ever been sentenced. It also seems that the cause is worth the risk, in that there are about 200 semi-official Okupa houses in Barcelona, and another 500 that are clandestine, according to Jesus Rodriguez of Directa newspaper.

Jesus has been living the Okupa lifestyle for sixteen years and has lived in twenty squats. Sitting across from him in Espai Obert, a rent-paying public space in Barcelona’s Sants neighborhood, he looks like a normal guy: nice sweater, short haircut, bright brown eyes, close shave. Jesus breaks the mold of the typical trust-fund hippie Okupa, he comes from an immigrant background and a poor family. He works in the mornings at Directa, and in the evenings at the bar in Espai Obert, challenging the “Okupas are lazy” line. When I ask him why he takes the risk and lives what many would consider to be an uncomfortable lifestyle, he says he’s in it for the political message. “Occupying abandoned buildings is something that everyone should be able to do, it shouldn’t be illegal,” he says. 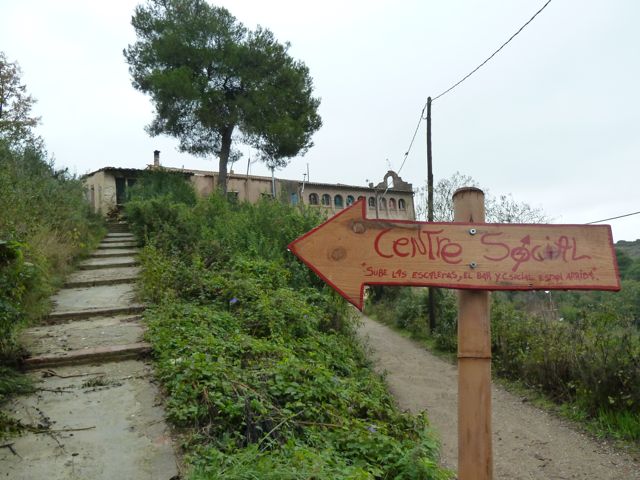 While Jesus lives with just three other people in a compact, one-story home in Barcelona’s Sants area, most Okupa squats accommodate many people and are communal. Squats like Rimaia, an open university in El Raval and Kasa de la Muntanya near Park Güell have many members running their cultural projects and living on site. Multiple factors go into creating a successful Okupa project, but two main elements stand out: 1) connection with the community or barri (neighborhood)  and 2) communication and shared goals within the house.

An excellent example of these two principles at work is Can Mas Deu. An urban-rural project, Can Mas Deu is in Nou Barris, a working-class immigrant barri in northwest Barcelona. Set in what was once a leper hospital, Englishman Martin Shaw and four others took over the building ten years ago and turned it into one of Barcelona’s most impressive Okupa projects. “Integrating one’s life and politics together is important to me,” says Martin, who is very much a walk-your-talk activist.

Can Mas Deu’s focus is on “green activism” which the twenty-member household cultivates in the lush fields surrounding the house. School groups come to tour the grounds and plant seeds, neighbors from Nou Barris garden small plots on the property, city-slickers lend a hand every Thursday in the vegetable gardens, and people from all walks of life come on Sundays to take part in Can Mas Deu’s many cultural workshops and public lunches. 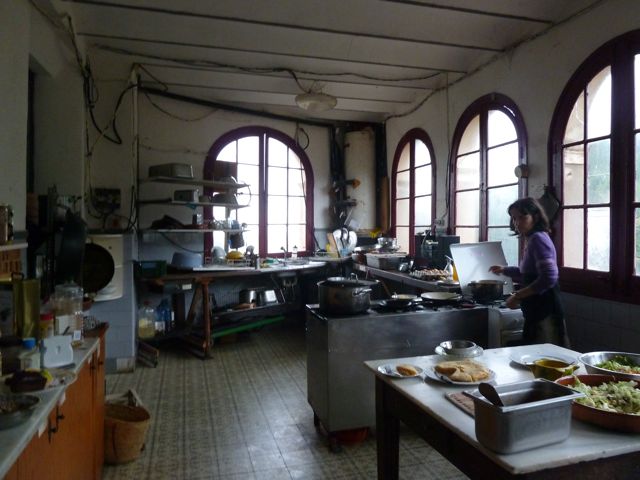 This devotion to create connection with the community, especially with Nou Barris residents, has been the key to CMD’s success. “Our first line of resistance is by being good neighbors and by having a very strong connection to the local community. That’s why were still here,” explains Martin. Support from neighbors came in handy in 2002 when the police tried to evicted the CMD household. After days of resistance and protest from the community, the police left, and CMD continued to grow and prosper.

CMD is run in an orderly fashion that is standard practice in intentional communities. In many ways, CMD resembles a commune, the difference being its semi-urban setting (you can reach CMD via subway) and its legal legal status. At any given time, residents, some of them children, could lose the roof over their head. On average, members of CMD need €60.00 a month for all their expenses, including food, water and electricity. When Martin dropped this number, my eyes widened; I pay €60.00 a month just for internet access!

While the price is attractive, CMD is not luxurious. Bathrooms are two composting toilets  outside, the bath and shower (heated by solar panels) are also outdoors and occasionally cold. Furniture is made of found objects, and CMD residents have many roommates. Still, the beauty of the place and the inspiration that fuels the hard work that happens in the CMD organic gardens is alluring, and it’s easy to see why so many would like to be part of CMD. Joining is not easy, as all twenty members must vote the interested party in.

Okupas on the world stage

The concept of occupying something in order to bring awareness to it should sound pretty familiar these days. In mid-May of 2011, protesters in Madrid and Barcelona began to occupy the town squares Plaza de Sol and Plaça Catalunya, respectively. Similar occupy protests followed in towns across Spain. Tents were pitched, tree houses built, and signs opposing austerity cuts to social services and demanding fair housing were hung from statues. Many of the protesters who came to occupy Plaça Catalunya in Barcelona were also involved in the Okupa movement. Martin for example, spent three weeks in a tent on the square and helped to create a couple of especially stunning tree houses. 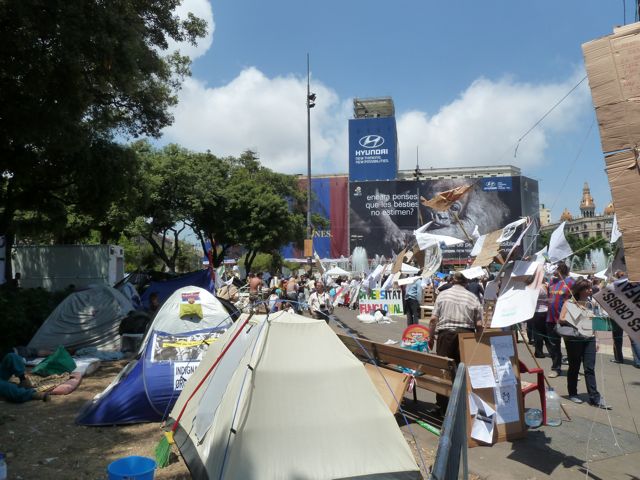 This protest, called M-15 or Indignados, was partially inspired by the Arab Spring movements in Northern Africa. Protesters continued to occupy Plaça Catalunya until June 14th, when they unsuccessfully attempted to move the camp to Ciutadella Park. Though the camping ended in June, the M-15/Indignados movement is still very much alive and has been present at recent demonstrations since, two of the largest being marches on June 21st and October 15th. The similarities between Plaça Catalunya and New York's Zuccotti Park are clear, and while the motivations for each are slightly different, both hold big business and banks responsible and implement similar tactics to call attention to their causes. Occupy Wall Street began on September 17, a couple months after the M-15/Indignados movement’s peak in Spain. Occupations have spread to over 100 cities in the United States.

As the weather turns cold in Spain and the US, occupying plazas is less appealing and the need for housing becomes even more urgent for the homeless and those confroting eviction. While the Okupa movement is far from perfect, it offers a creative solution for those in dire straits. Though Spain’s newly elected conservative President, Mariano Rajoy, promises prosperity and an end to the crisis, change is slow to come and many need solutions now. I can’t imagine losing my home, but if I did, I’d opt for an Okupa squat over a leaky chabola any day. I don’t ever want to have to make that choice, and don’t believe other families should have to either.