Sometimes a Lawn Mower Can Change Everything - Shareable
Skip to content 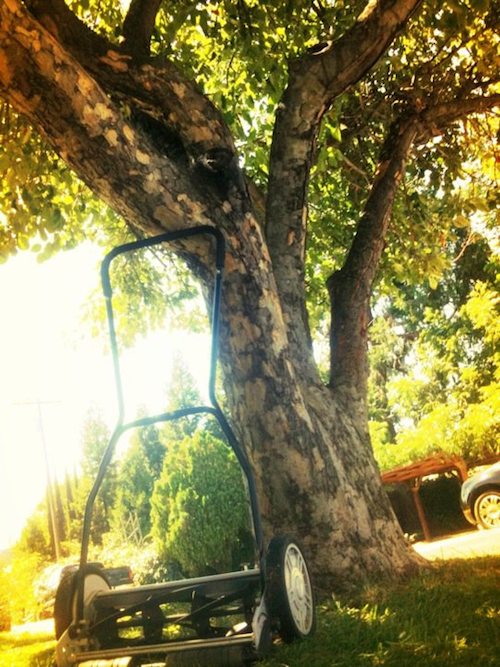 I always associated nice weather with the deafening “rrrrrrrrrrrr” of lawn mowers. It’s not a bad sound for most of us; it’s generally something that brings to mind summer days, backyards, and the smell of cut grass. To start a lawn mower generally requires some level of finesse: the perfect amount of fuel to prime the motor, followed by meaningful yanks to the pull cord. Having too much machine for the job is, supposedly and in some places, a uniquely American point of pride. A lawn mower is a classic symbol of suburbia, a perfectly-manicured carpet of grass the reward for its conscientious use. Stroll through any big box hardware store and you can see them, lined up and shining, some of them even ride-on style, costing as much as a cheap used car.

I deferred lawn mowing to my husband. I don’t like to fall into gender role stereotypes on absolutely everything, but fact is I birth the babies and my husband mows the lawns. It hasn’t been that long that we’ve even had a lawn to mow, anyway—five or six years ago, we had only one child and lived in an apartment in downtown Austin. So now the default has been, if it involves a gas can, it is husband territory. Not to mention the pull-starter, which seems to require testosterone to use. If I ever managed to start the lawn mower, it was either by happy accident or the result of a half-hour of furious, lump-in-the-throat exasperation. This fact led me to yield to even more gender stereotypes, such as nagging my husband in the early evenings or on the weekend to just please, please cut the grass.

It went on that way until we found ourselves at a yard sale about year ago, and came across a barely-used, old fashioned push reel mower. We might not have bought it if our gas-powered one had been working, but it had mysteriously stopped functioning two weeks before, and we were watching our weedy front lawn grow long and feeling reluctant to part with the cash to buy a replacement. But here it was, a choice we could make: fifteen dollars for a simple, people-powered option.

Why don’t more people use push reel mowers? After using and loving ours, I was baffled by their relative rarity, so I did a little research: turns out, getting sticks caught in the blades is an irritation for some. Also, if you have a really bumpy, hilly yard, you probably won’t get the precision cut you might prefer. And you can’t let your grass grow really long before you mow, because the blades will tend to just fold the grass over rather than cut it. Compare those negatives to the estimate that operating a gas mower for an hour is the pollution equivalent to driving a car three hundred miles.

We toted our reel mower home and started to use it. I was really excited for a few days, maybe for the same reasons I like vacuuming and find the chore soothing. It was so easy to pull it out and scoot around the yard with it, and I could even do it with my young children nearby. I could hear them if they needed me, I could stop what I was doing and tend to their needs, then easily come back and pick up where I left off.

What was more unexpected was the cascade of events that happened as a result of switching lawn mowers. The first thing was, neighbors started to ask to borrow it. I had never lent or borrowed lawn equipment; I don’t know exactly why. Something about seeing us with ye olde push mower in the front yard, looking like a Norman Rockwell painting, made people want to try it out. What grew from that is: it’s the official lawn mower of our block, now. And we borrow the electric weed eater from another neighbor, because I can’t figure out an unpowered way to do the edging. We’re all sharing tools, sending each other quick texts or Facebook messages, saying, Can I use the mower tomorrow? Is it in its usual spot?

When you switch to a reel mower, you start to notice the sounds of gas-powered lawn tools around the neighborhood, especially early on a Saturday morning. It shouldn’t be benevolently in the background, it should be seen for the unnecessary environmental- and noise pollutant that it is. Most people I know are really bothered by gas-powered leaf blowers, which have become broom replacements for many folks. Why stop there? While the ultimate solution is edible yards and the stopping of growing the useless crop known as the American Lawn, for now can we agree to stop the revving?

I also didn’t expect some of the other subtle changes the new mower brought about: the elimination of the pull cord starter from my psyche gave me a confidence in outdoor chores I hadn’t previously had. I felt powerful out in the grass, not deferring to our family’s head mechanic, vehicle-specialist, and user of power tools. I grew more excited about trying my hand at growing vegetables, and instigated a raised-bed garden building project one weekend. Now, three growing seasons later, I know how to amend soil properly, start my veggies from seed, and utilize a vermicomposter.

I am not going to attribute the decision to sell our car and become a car-free family in suburbia to giving up the gas mower, but there are tendrils of connection there, as well. It’s a sudden switch to stop what you’re doing, disrupt the status quo, and say, Why? And, Is there a better way?

Can holding a tool in my hand and operating it using the strength of my body lead me to a certain kind of empowerment in other parts of my life? I can mow this little patch of grass and look over at the garden growing the food that’s powering the muscles that are mowing this lawn. And our machines shouldn’t take that pleasure away from us.