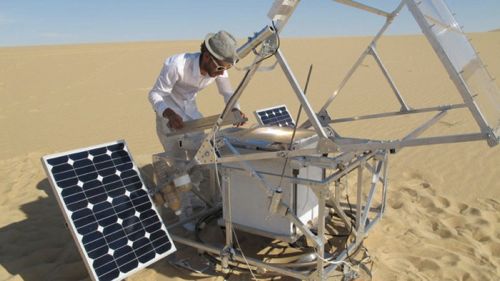 Via Colossal, industrial designer Markus Kayser has built the Sun Cutter, a low-tech version of a laser cutter that uses pure sunlight focused by a ball lens, and the Solar Sinter, a 3D printer which uses the sun instead of a laser to produce objects from sand. In these videos, Kayser demonstrates the Sun Cutter and Solar Sinter in action in the Egyptian desert.

While the objects Kayser has made with the devices are modest—Kanye-esque ironic '80s glasses and a glass bowl—he sees the objects as having the potential to address issues in desert manufacturing. At his site, Kayser explains "In a world increasingly concerned with questions of energy production and raw material shortages, this project explores the potential of desert manufacturing, where energy and material occur in abundance." Read more about it at Colossal.