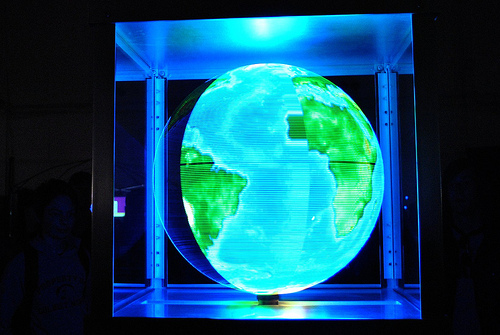 Hobbyists are nothing new: many of us had a cool uncle with a meticulously-managed model train set in his garage, or an eccentric relative who was perpetually hatching plans for some get-rich-quick invention. There may have once been a cultural stigma around these folks, but some of them drove the early computer revolution, and designed many of the tools we use every day. Yet even those early hobbyist-hackers were only precursors to the Maker Movement that is now thriving. Thanks to a number of factors — reduced fabrication costs, the connectivity of the Internet, the rise of hackerspaces, and a cognitive surplus — the humble hobbyist has been transformed into a full-blown agent for change in recent years. Many of the fundamentals remain, such as the enterprising impulse to build something cool from scratch in your own home, but the Maker Movement is becoming a cultural movement that stands to significantly change how we produce, use and share objects.

Though many projects operate more as gee-whiz proof of concepts, these prototypes may have greater applications. For example, the solar-powered 3D printer makes glass objects from sun and sand, and while its uses have been modest to date, it could present a solution to the difficulties of manufacturing in arid parts of the developing world. The movement could also represent a more sustainable form of production and consumption. As Shareable’s Malcolm Harris wrote earlier in the year, “open-source and free blueprints combined with widespread personal- or community-level manufacturing capacity could mean ‘consumer goods’ without the non-producing consumers.”

Entrepreneur and thinker Anil Dash is a vocal proponent of the Maker Movement. In this video interview with Dale Dougherty of Make Magazine, released to coincide with this weekend’s World Maker Faire in New York, Dash speaks about his vision of the Maker Movement as a way that citizens can develop solutions to some of the most pressing issues we face as a society, from education to job creation.

Dash notes “Making is bigger than just tinkering or crafting, but actually represents an important social, cultural and political force.” This echoes a previous post, in which Dash spoke to the potentially revolutionary impact of the Maker Movement:

In city after city, year after year, tens of thousands of people pay money to show up and learn about taking control of their media, learning, consumption and communications…The jobs that many of us have in 2030 will be determined by young people who attended a Maker Faire, in industries that they’ve created. There is no other political movement in America today with a credible claim at creating the jobs of the future.

As Americans settle into another protracted and divisive political campaign season, Dash’s vision is one of hope, predicting a DIY revolution that sidesteps the cynicism and anger that dominates our political and cultural dialogue.