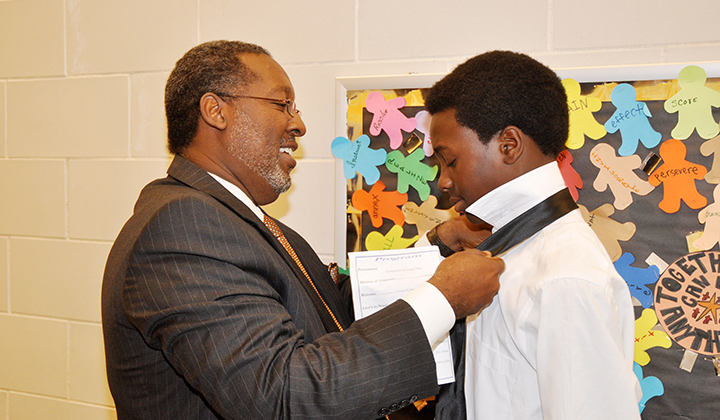 Middle school is a trying time for any teen but the pressures faced by African American teen boys are especially complex. A program in New Orleans is matching 12- and 13-year-olds with mentors that help young men belong in a community that aims to divert them from gang membership and build feelings of empowerment and masculinity that are not predicated on violence. It is a partnership between The Silverback Society, a Louisiana-based nonprofit, and Weave: The Social Fabric Project, which is a program of The Aspen Institute and brainchild of author and New York Times op-ed writer David Brooks.

“[W]e teach them, and by example, share with them the joy of a masculinity that’s based on being able to provide resources for the people that you care about.”

The Silverback Society partners men with middle school students in a mentorship program in New Orleans, Louisiana; and St. Louis and Biloxi, Mississippi. In the past decade, the nonprofit has paired 150 mentors with more than 3,600 students across 17 schools, including more than half of the K-8 schools in New Orleans. Alumni have access to an app that they can use to keep in touch with their mentors and each other.

The organization partnered with Weave after the program launched in May 2018 with a goal of addressing social disconnection. Founder David Brooks said American culture tended to prioritize individualism over a human connection, which curbed a healthy culture Brooks dubbed “relationism.”

Dennis said Weave was a natural partner for The Silverback Society because it brought together people who seek solutions for social isolation.

“Imagine what it takes for a kid to feel like he’s got nothing else to do except kill somebody. And sometimes it’s so that he can belong to a group. Some gangs, you have to do something terrible and awful so you can belong… [We] set up a place for kids to belong.” Dennis said.

“[One student] said, ‘Once I joined the Silverback Society, I have never walked alone.’ I think that’s right to the core of what Weave is kind of about.”

This project is part of a grassroots movement, of which Brooks is a figurehead, that tries to heal the social fragmentation of American society.

In a New York Times opinion piece published in February, Brooks lamented “our lack of healthy connection to each other, our inability to see the full dignity of each other, and the resulting culture of fear, distrust, tribalism, shaming and strife.”

During the past year, Brooks has been on a “listening tour.” Over the course of 20 dinners, Brooks met with 400 people and asked them who the most trusted person in their community was and how they built relationships despite fractured social structures.

A diverse group of 300 people came together on May 14-16 for the #WeaveThePeople conference at a recently gentrified corner of Northeast D.C. now home to Union Market. Attendees, including 80 people from the listening tour, met to share stories, hear keynote speakers and form small discussion groups. “Sometimes it takes a sledgehammer to open up a new level of consciousness,” Brooks said at the conference on opening day. He encouraged attendees not to shy away from challenges. “That feeling of uncomfortableness is part of the process.”

Weave has partnered with NextDoor for a new initiative encouraging neighborly connection that will launch in July. Other partnerships include Facebook (developing resources for community leaders), the YMCA, and Reader’s Digest (Brooks recently served as a judge for their contest, “Nicest Places in America.”)

Michael Skoler, Weave’s communications director, said Weave was not a project of leadership but of empowering people to have a language and a name — weaver.

“Ultimately… our goal is to have everyone kind of say, ‘Hey, I’m a weaver.'”