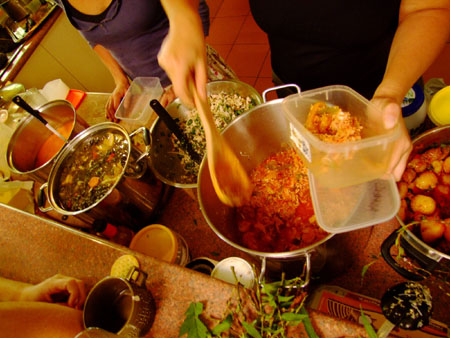 The clouds slung low and grey when I awoke and the wind blew cool air through the house. It had rained for several days, making paths slimy and everything damp. It also meant that mothball-smelling cardies were finding their way out of the winter bags and back onto our backs as we went offshore for a MamaBake. These were perfect conditions for a group, big-batch cookery session, for the oven to work tirelessly for a few hours chucking out warm, homey baking smells. I was jazzed and looking forward to the house coming alive. 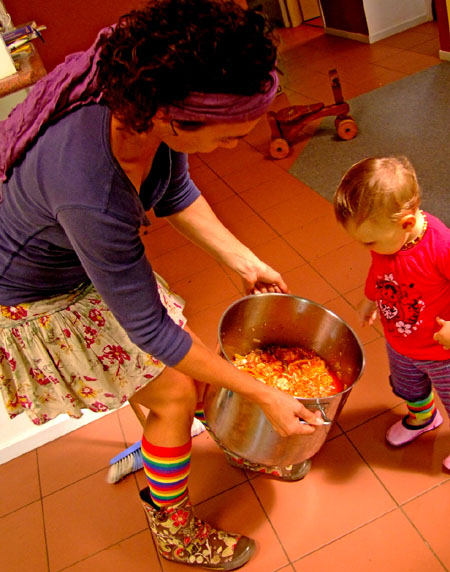 I was expecting six women to my house and, while in the past I would have been dashing around hiding any sign of real life, today I went about making chai and chopping potatoes, ignoring the baskets of dirty laundry lurking in the lounge. MamaBakers aren't interested in the state of one another's houses. It's a small gesture of rebellion in this age of facade that has gathered destructive momentum amongst the mothering community of nonsensical competition and 'you are the state of your house.' Like my wonderful mother-in-law (mother of four, grandmother of nine, and honorary MamaBake elder) says every time she visits and I apologize for our untidiness, "We've come to see you, not your house." So, the washing stayed where it was and lightning didn't strike.

The women started to arrive at 10:30 a.m. Mama Stone arrived first with a baby and a huge pot of chicken soup. She plopped her baby down for a sleep and got the pot on the stove to simmer. Mama Becs was just behind her and walked in smiling with her little man slung on one hip and a box full of herbs, roots, and Thai condiments. She strode in and pulled out a three-foot Vietnamese Mint plant she had dragged from her friend's ground just 30 minutes before. "Get it in the ground Mrs. Shearer. It's still got its roots on!" she beamed.

I made a pot of chai while we waited for the other women to arrive and we talked about traveling with family, 80-liter camping fridges, and the brutality of the ravenous, unrelenting mosquitoes dotting and bouncing off the glass door outside. Within an hour, the three other women had arrived – one, who was eight months pregnant with her fifth baby, had slipped on my slimy path. We sat her down and made her tea. She had cut her hand and her tail bone was bruised, but she felt okay. She gestured toward a small pot on the table and told me that it was noodles she had scraped up after she had fallen and that maybe the parrots might like to eat them. I took the pot outside and the parrots got gloriously beak deep in them. 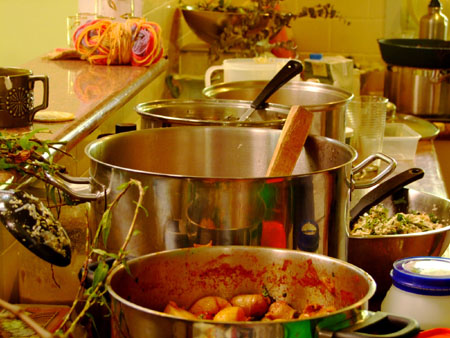 Mama Becs was making a chicken larb, a beautiful Thai chicken salad. She and her little son chatted quietly as they chopped lemongrass stalks, peeled garlic, and plucked keffir lime leaves for the sauce. The aromas were something else. I had made a sausage and potato goulash, a hearty favorite, which was bubbling sweetly on the stove top. Meat and potatoes — the weather had cooled dramatically over the past few weeks and with so many English women in this particular group, meat and taties is always a surefire winner.

Mama Eloise, pregnant, sat rolling a thousand spring rolls (My family just ate them for our breakfast this morning. Delicious.) while Mama Amy sat chatting with her about children. Mama Amy had pre-prepared her dish of prawn jambalaya. This is a popular option with some women some of the time, to pre-prepare a dish the night before and bring it along. This gives you the golden pass straight to the chai and cake. Mama Kimberg had pre-prepared hers, also — a Thai chicken soup — and was sitting with the kids reading them stories.

Of six women, two had pre-prepared their meals and three had semi pre-prepared and just needed to pop the pots on the stove, which left Mama Bec room on the work bench to spread her herbs out and work her magic. One of our usual Mamas couldn't make it this day so we made sure that what we went a little bit further for her. She had been working long hours all week.

Finally, at about 1 p.m., we lined up the pots and the grand divvy up began. The sweet level of chaos of the morning now ramped up 1000% with ladles and large spoons being handed about, takeaway containers being flung here and there, splatters of sauces flying up the fronts of Mamas and bairns. Mamas checked on one another that everyone had their share before she took hers, batching up containers for Mamas who weren't there. 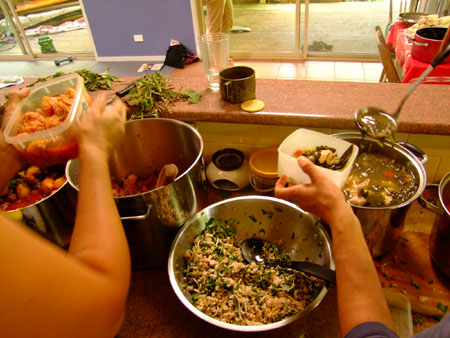 Everyone had their boxes of MamaBake takeaways, neat and perfect, ready to be brought home and stashed in the fridge for the coming week. Happy and content, the Mamas took their leave, and even after they had gone, the atmosphere they had created hung brightly in my home.

Much like every other day of a mother's existence, the energy of a MamaBake session is much like the chaos of white water rapids — keeping our heads up, chatting as we go, holding on, up and down, around the rocks, whooping and tooting, and then into the calm pool where everything makes sense and all is well.

MamaBake means that each mother goes home with a variety of home-cooked meals for a few nights of the week, giving her some well-needed time off. It also means that on a regular basis we know that, whatever has gone on in the week, there will be a point in time where we can be in the warm embrace of our MamaSisters who get us, who get the turbulent journey of motherhood, who get the ups and downs, all wrapped in a safe, loving place where we can over-share til our heart's content.

The MamaBake concept was conceived of by Michelle Shearer, surfing Mama of two children and two parrots on the North Coast of NSW, Australia. The idea was inspired by her

The MamaBake concept was conceived of by Michelle Shearer, surfing Mama of two children and two parrots on the North Coast of NSW, Australia. The idea was inspired by her Grandmother (Nanna Bird) who told her how her mother used to swap bread for hotpots with other mothers in the street. The MamaBake concept made perfect sense to everyone: let's cook for each other and ALL enjoy some free time and support . From there the MamaBake concept has captured the imagination of Mamas across Australia and beyond.