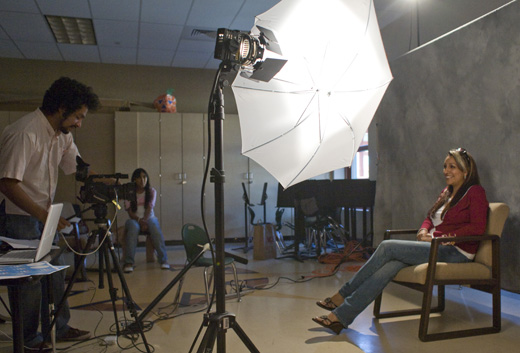 How can public art strengthen community as well as beautify the environment? “Our Oakland : Eastside Stories,” a new public art project by Bay Area artist Rene Yung, aims to do just that.

Designed for the new East Oakland Community Library, in addition to architectural artwork, “Our Oakland” features a social media website and community-building program to tell “the other story” of East Oakland: the assets and rich heritage in the community.

The website recently launched on Martin Luther King, Jr. Day with dozens of stories about East Oakland residents and community organizations. The stories provide a public testament to East Oakland’s enduring resilience and proud history, as well as its hopes and dreams. Anyone who has a story to share about East Oakland can upload video, photos, graphics, audio or written pieces to add to the participatory website in English or Spanish. Community members and organizations are invited to contribute stories at the site.

“It’s all about sharing and interconnectedness,” said Yung, who is also project director for "Our Oakland." “The idea is to collectively highlight the positive assets in East Oakland that are too often overlooked, and create a platform for individual voices from and about the community.”

The goal is to present a more balanced picture to counter the violent images and dramatic headlines that make up most of the public knowledge about East Oakland. “That kind of persistent negative portrayal starts to stymie community hope, and without hope you can’t imagine change,” Yung states. “Our Oakland is about re-telling and re-imagining East Oakland in order to inspire people to take action for positive changes in their community.” 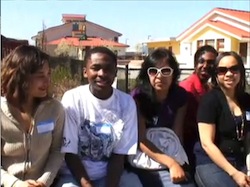 Yung also envisions “Our Oakland” as a portal for community and civic organizations that serve East Oakland, to let residents know about the resources available to them. Local organizations can share their work on the website through a partnership program. Current Featured Partners include East Oakland Youth Development Center, Youth Roots, and Rainbow Recreation Center. Media partners including Youth Uprising and First Voice Media helped produce the first group of videos at Community Story Telling Days organized by Yung, to gather stories from families who do not have media access.

In one of the videos, 10-year-old Michael Angelo, wearing a brightly colored sweatshirt, recites his school pledge. “I will color very carefully, my writing will be neat, I will not be happy till my papers are complete,” he rhymes proudly. “I’ll always do my homework and try my best on every test, I won’t forget my promise to do my very best.” He wears a stethoscope around his neck because his dream is to become a doctor one day.

In a bilingual video, immigrant Maria Diaz talks about her hopes for her children, and working with other parents to get ACORN Woodland School rebuilt from dilapidated trailers into a beautiful facility that is part of Oakland’s new small-school system. Young people in another video, wearing bright blue hard hats that shine in the midday sun, graduate from a green jobs training program. Jay Ento, who grew up in East Oakland, talks about the sense of respect she remembers in the community and the changes today, and urges adults to talk to young people and hear their ideas for solving some of the community problems. Malayphet Insixiengmey, a kindergarten teacher, talks about growing up in East Oakland in an immigrant family and choosing to come back home to give back to her community.

“I have a lot of pride in my city,” Insixiengmey says, with tears in her eyes. “I don’t know if I could live anywhere else. I just love the people here. I could not work anywhere else.”

Fannie Brown, a community activist and 40-year resident of East Oakland, insists, “East Oakland does get stereotyped. But it is not as bad as people claim it to be. It’s not where you live. It’s how you live and what you do.” Brown told her life story in several Our Oakland videos and recalled her life’s work dedicated to the neighborhood.

“Our Oakland is a good thing to do because people don’t know what’s going on in the community,” Brown said. “Record a story, and maybe someone else will see it, and something you say will help someone else.”

The project is Yung’s response to a commission from Oakland’s Public Art Program for the new East Oakland Community Library. Currently under construction, the 21,000 square-foot library will be the City’s first green public building. In addition to the online presence of “Our Oakland,” Yung design art glass for the 64-foot windows in the library’s reading room. The newly-installed artwork features an image of overlapping ripples in transparent blues, representing the project’s theme of interconnection in that one action affects another. 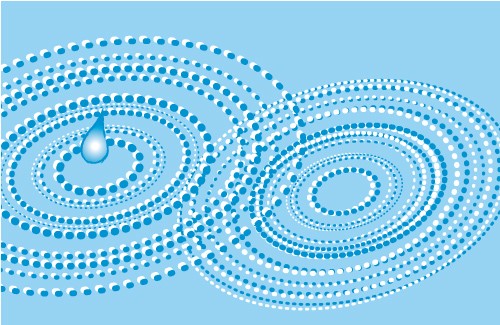 The window artwork also represents another project theme, community replenishment. A design of leaves and seed-pods in fresh greens recalls East Oakland’s agricultural history in the 19th century with farms and orchards fed by deep wells and aquifers that are now depleted due to human use. “That’s why we need to remember the heritage of East Oakland,” Yung said, “in order to reclaim it.”

The ripple motif is applied to the website design, and an Interactive Pod in the library that Yung also designed. “Our Oakland” stories will be accessible online and at the Pod as a living, growing archive of East Oakland’s rich legacy.

But Yung hopes that the stories will just be the beginning of a series of ripple effects, where community members will take pride in their neighborhoods and project organizations will form their own partnerships, to share ideas and resources to revitalize East Oakland.

Our Oakland : Eastside Stories is an integrated public art project by artist Rene Yung that will beautify the new East Oakland Community Library and create a new online platform

Our Oakland : Eastside Stories is an integrated public art project by artist Rene Yung that will beautify the new East Oakland Community Library and create a new online platform for community to share stories about East Oakland. The overall theme of the project is Mutuality + Transformation, meaning that as members of a community, each of us is interconnected and we have the power to individually and collectively take action to make positive changes in our communities. Share your story! https://www.ouroakland.org

Things I share: Our Oakland's portal/social media site invites locals and organizations to share stories in the form of photos, video, audio, and written stories about, and for the community of East Oakland.