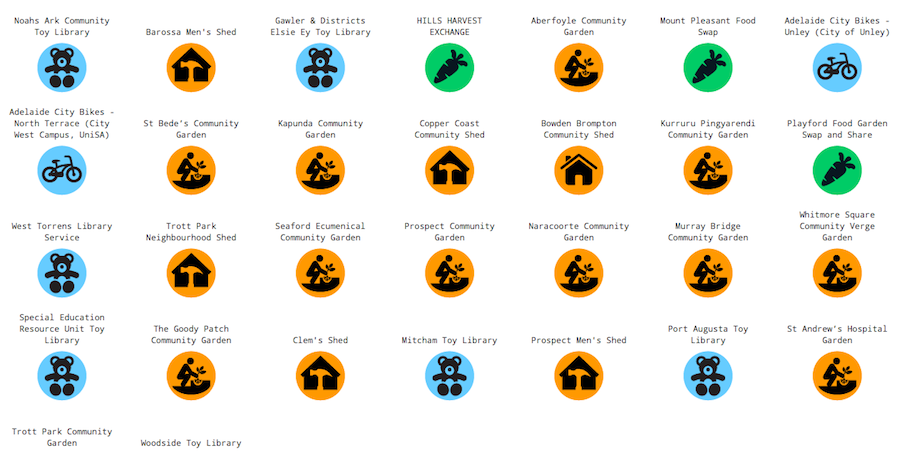 Matt Scales and Sharon Ede went to Ouishare Fest in Paris last May to present Share N Save, an interactive map of sharing activities in Adelaide, South Australia (SA). While there, Scales, who is Manager for Media, Digital and Brand Delivery at Zero Waste SA, would try to sell or license the platform to other organizations. Along the way, he and Ede spoke with people at WRAP UK, FutureGov and NESTA, to test the Share N Save concept, benchmark where the South Australian government was comparatively, and investigate the potential to license the software.

When they returned home from OuiShare Fest, Scales' chief executive asked him how many copies of Share N Save he sold. Scales responded, “Not only did I not sell a single copy, I am going to also recommend we give it away for free.”

His plan was to make Share N Save open source so organizations around the world could benefit from it and build upon it.

Conceived by Ede, who is Senior Adviser of Industry Sustainability at Zero Waste SA, and developed in conjunction with her colleague Simone Cunningham in early 2012, Share N Save is a mashup of two different web sites: the Green Map System, created by New York-based founder Wendy Brawer, which uses a common set of icons to map various sustainability and social aspects of cities, and Do Something Near You, a platform created by Australian environmentalist Jon Dee that connects people with volunteer opportunities that match their interests and location.

Share N Save maps food swaps, community gardens, Men’s Sheds, toy and tool lending libraries, coworking spaces, land sharing, and more. The platform is simple and elegant. Dr Ann-Sophie Novel, an eco-journalist in France, referred to it as best in breed, telling Scales it was the most beautiful of all the tools she had seen.

When he explained the goal to recoup some expenses, or to at least license the software, people were surprised he wanted to charge for a tool focused on sharing resources for free.

“It became untenable,” says Scales, “to hold the view that it was ever going to be a commercial tool.”

So, Zero Waste SA made Share N Save open source. The benefits of doing so go beyond community goodwill. Scales lists the following reasons for the decision:

“Our plan,” explains Scales, “is for local design and programming firms to adopt the open source platform of Share N Save, and with our guidance, become skilled in assisting other jurisdictions who want to use the free software but who do not have the technical skills or time to install and customise the platform.”

At this point, Share N Save is still relatively small—what Scales calls “a drop in the ocean.” But they’re looking at ways to partner with other organizations in Adelaide, including the Live Music Office, a department tasked with expanding the live music scene to raise revenue. The Share N Save team is talking with them about how they could customise the platform to map music industry assets such as venues, genres of music played at pubs and clubs, musician hire and support service, and networks of musicians offering either equipment or accommodation for touring musicians to make the cottage industry of touring more effective and cost neutral.

“This is a really interesting potential sharing partnership,” says Scales, “but it's in the infancy stages.”

Share N Save is also talking with other organizations and individuals about the need to create standards around sharing icons. For instance, creating a globally-recognized icon for a coworking space, or community garden, or bike share. The Share N Save icons are simple, clear, and gaining attention. Making the platform open source could be a move toward standard icons.

At this point, what Share N Save needs is more users and contributors. Ede suggests using the platform for mapping local sharing services and shared assets as part of movement building. Share N Save is available on GitHub and directions for using it are forthcoming. To get involved with the project, Scales recommends getting a copy and exploring it.

“Try it out if you are a web-nerd or coder or designer,” he says. “Tell us what you would do with it, or better yet, build an add-on or improvement and share it back to the community in the next release.”