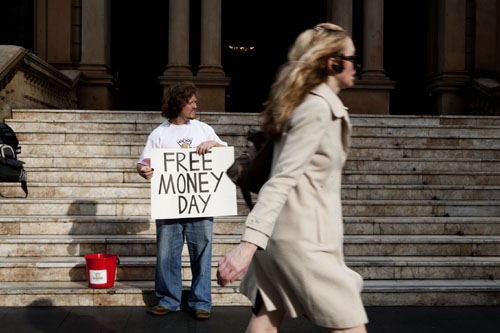 On September 15, 2011, at over 60 locations worldwide, people handed out their own money to complete strangers, two coins or notes at a time, asking recipients to pass half on to someone else. Here are our reflections on the event, including why and how it happened.

Most of the world’s transactions do not involve finance. From parenting, caregiving, growing and sharing food, volunteering, and borrowing library items to doing household chores and exchanging ideas on the Internet, aspects of the informal economy are familiar to us all.

A brief historical look also reminds us that our current monetary systems aren’t all we’ve ever known. In fact, even now, there are numerous alternatives currently in play. For instance, thousands of people around the world are engaged in bartering and gift economies which have persisted since ‘pre-money’ times. Others are developing and using alternative currencies, such as Local Exchange Trading Systems (LETS) and TimeDollars or Time Banking. There are also groups working on ‘open-source’ currencies, and families who are choosing to spend less money, buy less stuff, and live more simply.

Often drawing on these alternatives, an increasing number of organized initiatives are deliberately fostering sustainable economic and political systems. Think here of Transition Towns, the Centre for the Advancement of the Steady State Economy, the Post Carbon Institute, Via Campesina, the New Economics Foundation, Community Economies, and Occupy movements. 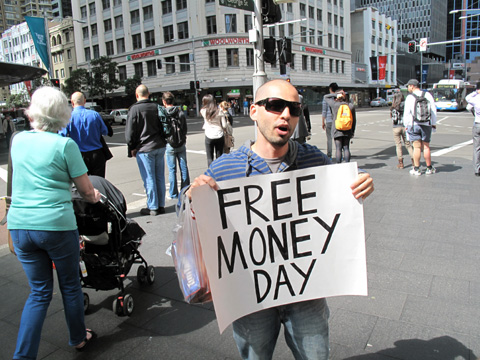 In this light, the proposition that we can thrive without a growth model economy becomes increasingly believable. Indeed, it can be understood as more likely to serve us than the alternative: the endless pursuit of growth on a finite planet.

Given the relentlessness of growth messages from our media, governments, and each other, how might we collectively recognize the greater prosperity that can accompany shifts away from economic growth? How can we understand the relationships among existing sharing practices, new systems developments, and potentials for post-growth futures? How can conversations – about the meanings we give to money, the ways we use it, and alternatives to our reliance upon it – be nurtured in public spaces?

Inspired by these questions and being big believers in the value of exploring the lighter side of grave challenges, we at the Post Growth Institute decided to conduct a social experiment: Free Money Day. Encouraging creative approaches, we challenged the peoples of the world to take to the streets to give away their own money. Signed-up participants committed to give two small coins or banknotes to strangers, asking these strangers to pass one of them on to someone else – as a symbolic gesture, not a donation.

Quirky? Yes. Likely to elicit questions and dialogue? We hoped so. The idea was for this simple exercise to act as an interruption to our trained response to the prospect of ‘free money’. Curiosity was embraced as a conversation starter.

We created a website and invited participants to share what they did through photos, footage, or reflections they wanted to pass along to the wider world. The site included a world map, so people could find their closest event and observe the experiment’s reach.

We scheduled activities to happen on September 15, 2011, purposefully coinciding with the anniversary of the 2008 bankruptcy filing by Lehman Brothers. One of the world’s largest investment banks at that time, Lehman Brothers’ collapse triggered a series of events which contributed to global financial mayhem, the repercussions of which are still being felt.

Why Focus on Money?

As a medium for exchange, money helps keep many economies running. A certain level of income is vital for people within such systems to be able to meet their basic needs. However, research consistently suggests that, beyond a certain point, having more money does not increase an individual’s well-being. This obsession with making more money as individuals is mirrored by our societal addiction to unending economic growth.

The pursuit of these fixations is seriously impacting people’s employment situations, livelihoods, ability to access food, and even the stability of the climate. The money systems in which we are currently enmeshed are fundamentally unstable – they create bubbles, and a destructive boom-bust cycle, which result in loss of jobs, homes, health, and even lives.

The U.S. government’s repeated debt ceiling hikes may temporarily delay further economic upheaval, but an overarching problem remains: We cannot grow on like this! The world’s formal financial systems, which are based on exponential growth, are fundamentally incompatible with a world that has limits to the availability of certain resources.

The Gift of Giving

As it turns out, there are plenty of people eager to liberate themselves from the entrenched relationships we so often have with money and, therein, growth. At the first global Free Money Day, there were 64 events registered in 44 cities, across 19 countries. The equivalent of approximately $3,000 (US) was given away to complete strangers. In addition, to their great surprise, some participants were handed money by strangers!

Participants took seriously the invitation to get creative: One person drew pictures, attached them to coins (with instructions), and left them in public places; one participant engaged ‘virtually’ as a way of overcoming material barriers to her participation in public; another participated via post. Several handed out money on the streets to passersby (on trains, in town squares, and even at the top of a snow-covered mountain).

Based on participant feedback, the predominant responses from the public were a mixture of confusion and amazement. Once people realized there was no catch, they were happy to chat in greater depth. One woman reportedly broke down in tears. She had just lost her job to corporate downsizing and said that whilst a dollar obviously wasn’t going to change her situation, she was comforted to know people genuinely cared. Another person, deeply moved by the gift, said it was the first time they had ever been given something without any expectations in return. 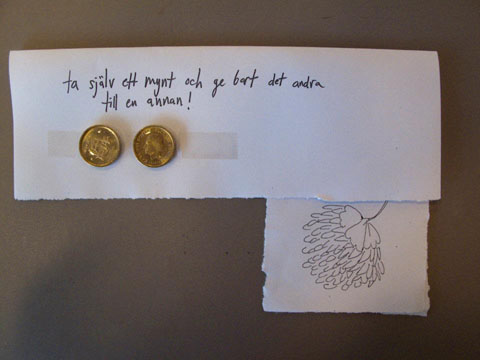 A common response was: "Give it to someone who actually needs it." However, the apprehensiveness of these passersby to accept the money often dissipated once they knew they could also give some of it away. And they did: In Sydney, where it took four hours to give away $1,000 outside the town hall, journalists came up to cover the story. When asked how they learned about the event, they said that their interest had been prompted when someone randomly gave them a dollar a few streets away!

Perhaps the greatest insights came from the people who were on the streets that day. Here is what some of them (givers and receivers) had to say:

“Those are the moments in life that I'm PASSIONATE about. Moments that challenge common conceptions, touch people in a different way that might actually make a shift in paradigm, generate debate and bring back LOVE to our lives.” – Axel

“[The day] inspired me to become more pro-active about the things I value and believe could improve the standard of living of others.” – Nudzejma

“I think about [money] all the time. I have a family, I want to look after them the best I can. So, obviously amassing as much as I can gives them the lifestyle that I want to give them. This concept of … having someone give it back to you throws everything on its head, gives me a chance to reflect … It never is enough. You just tend to spend as much as you make.” – Ted

“I’m a homeless man and I often get confronted by beggars coming up to me in the street, cutting me off, confrontational, and asking for spare change. Now, the awareness of this today is so cool because if everyone went around giving, no one would be asking … and the world would be such a better place.” – Joe

Fueled by the energy and passion of last year’s participants, Free Money Day 2012 will again take place on September 15 all around the world. This year we’re partnering with debt relief groups to include ‘forgiving’ informal debts amongst friends and formal debts between countries and companies. If you would like more information or are interested in participating, please visit the Free Money Day website or join the conversation through Twitter with the hashtag #freemoneyday, and Facebook.

Then again, no need to wait until September to try it out – sharing money is always common cents!

Authored by Donnie Maclurcan and Janet Newbury with thanks to Axel Gutierrez for assistance in researching this article.