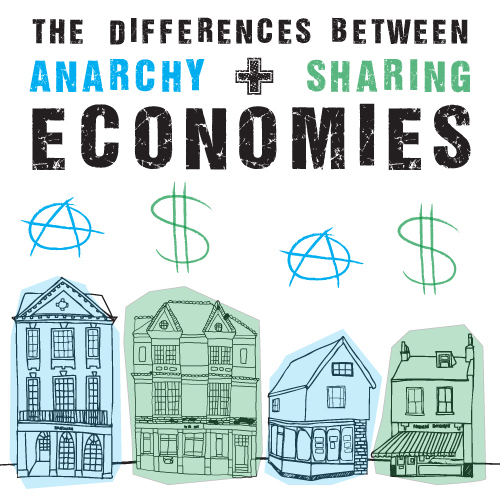 So which does your household participate in: the Anarchy economy, the Sharing economy, or both?

I'm not a big fan of the word Anarchy. It implies chaos and conjures images of masked mobs, smoke grenades, and police beat downs. But if our global financial system isn't in a state of chaos, just what state is it in then?

I have been involved with the Sharing Economy and Collaborative Consumption movement full time since 2006. That is the year I helped research and co-author the first municipal response plan for dealing with the effects of collapsing currencies and resource scarcity. I then left my position at a major media company to create an "all-in-one" hyperlocal community cooperation platform to tackle how a city could continue living if there were an overnight "shutoff" of oil supplies to America. I have since found that it is easier to focus on the positives of sharing as a lifestyle, not because I feel it will become a necessity.

What is happening in Greece is the perfect example of understanding the difference between parallel Anarchy economies and the Sharing economies. The same debt crisis struck Argentina in the early 2000's. As jobs and social support funds dry up, people's ability to pay debts (rent, mortgage, food, fuel, etc.) are becoming harder to come by. The money spigot has been turned off, and people are seeking creative ways to reduce the crippling stress that comes with non-access to resources.

More and more technology entrants are developing the sharing economy after figuring our how to monetize sharing behaviors in different sectors. By definition, when you receive money to "share" something, you are no longer sharing, you are selling. Would the employees of sharing technology companies still show up to work for free if the dollar lost its purchasing power? Would for-profit businesses continue to incur operational costs for the 'good of sharing' if the incentive to do so was lost?

The Sharing economy is quickly becoming a diluted term, just like 'sustainable" and 'all natural". If "sharing" means "make some side cash", let's call it what it really is. It is a way to raise cash using owned assets (a room, a car, a wheelbarrow, etc.) that boomerang back to the rightful owner at some point. This in itself is a new concept to many, and even in supposed liberal Portland, there is amazing anger commentary directed toward personally owned assets being put up for rent.

This is because the behavior is perceived as a business transaction. This is why a Sharing economy that will remain defined as a relationship-building endevour needs to tread carefully as we all move forward feeling our way into the future. More anger at rapid change will be released as the constraints of a finite planet manifest through conflict. Happiness in America is still connected to 'having stuff', and there are entire generations who want a bigger piece of a shrinking pie.

If the Sharing Economy is the responsible sibling, then the Anarchy economy is the black sheep in the family that keeps it real. There is a definite connection between the Anarchy and Sharing economies, but let's look at some distinct differences:

Sharing Economy:
Renting out your assets for money (renting out a room, p2p car sharing, etc.)
Selling amateur labor for money (non-bonded, uninsured, under or unemployed)
Rules based with various levels of legal terms agreed to between parties
Collaborative production and creativity (for a fee or suggested donation)
Seek to build credibility around past performance for future exchanges

The Anarchy economy is not trying to make money, and when it does, it becomes the "Sharing economy". 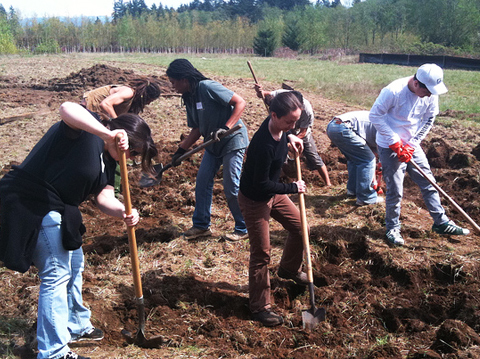 The Anarchy economy is the "Stone Soup" economy. You get out what you put in, and the value of each transaction is negotiated by the parties involved, not currency-value finance wizards at banks. An Anarchy mindset quickly brings order to chaos, bringing people together to create community through positive learning experiences that create a supply of something useful to the community. 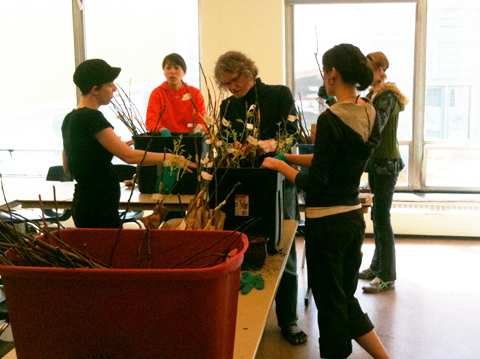 The Anarchy economy also understands that the real way to determine if you trust someone is to go beyond 'online profile reviews' and to get active in real world groups that have a sense of responsibility. In order to make the economy work successfully, it must have more than self-interest in mind.

An example of it not working is when the incentive (money) is removed, and the payoff (whatever value the person receives) is not enough for them to care.

But what would we do if the Anarchy economy was forced upon us in the event of the Strait of Hormuz getting shut down? Or the trillions of dollars created out of thin air coming home to roost and devaluing America's main currency to painful levels of hardly-any-purchasing-power?

Here is a continuity plan I would love to hear your comments on.

Randy White is the founder of Bright Neighbor - a pioneer in the Sharing Economy space. Full bio here: https://lawnstogardens.wordpress.com/about/

Randy White is the founder of Bright Neighbor - a pioneer in the Sharing Economy space. Full bio here: https://lawnstogardens.wordpress.com/about/