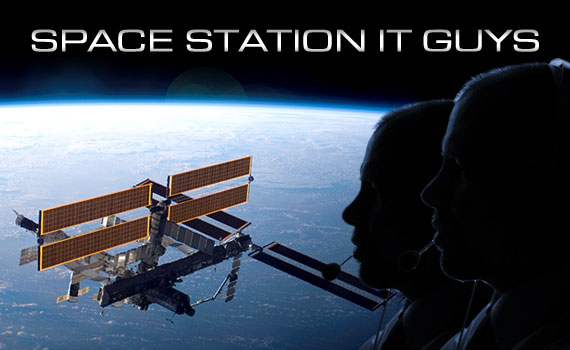 You're an astronaut. You're 250 miles above the Earth. Suddenly, your laptop crashes. Who're you going to call?

The IT guys, of course.

CNET has a terrific little Q&A with two of the guys who provide information technology support to the International Space Station. They describe how absolutely critical sharing and shareable technology is to maintaining the ISS. Some highlights:

What kind of IT do you have up there?

"We have a significantly large network on board the Station, comprising 68 IBM ThinkPad A31 laptops and 32 Lenovo ThinkPad T61p devices. One of the T61ps is a server, making it a client/server network with a couple of routers and an Ethernet backbone. There are both cabled routers and a couple of Wi-Fi access points up there. There's also a dedicated IP phone for phone calls and some limited video-conferencing abilities if astronauts need to see their families."

Can astronauts take their own netbooks, iPods or games consoles into space?

"We do have to control what they can bring up, but they can make requests and we'll assess them to see what can be accommodated. It's very rare actually — most of the requests are for personal items. If the crew wants specific movies, music or TV shows, we can uplink them to the server and they can then access them from any computer."

How you move data to and from the ISS?

"We have a portion of a KU-band satellite that we control for uplink and downlink. We're talking about 3Mbps up and 10Mbps down, or maybe a little less for some overhead. That's our portion for moving files around. Everything is managed through the server and NASA, so there's no direct Internet connection for the crew.

"In fact, for email, the crew gets very limited updates, just three times a day. Every eight hours, the OCA officer in Houston will bring down their offline mail account and sync to the server on the ground. Emails they send then go out to the world, new ones come in, and we uplink them to the crew."

How is the ISS IT different from previous NASA missions?

"These are working scientists carrying out research, so the network is used for just about everything. In day-to-day work, the crew use their laptops to check procedures, to review their timeline and to check their email. Everything they need is on the computers on board. One big difference between the Space Station and the Shuttle programme is that the Shuttle still uses all paper, printed-out procedures. On the ISS, all the procedures are on the server. Anywhere you can plug your laptop into the server, you can work from there."

And what happens when something goes wrong?

"The crew is trained how to manage the computer systems and laptops on orbit. They go through procedures and work through malfunctions, so when they get there, they're very well aware of what they can handle. The team at Houston is here for when the crew sees something they're not used to, or haven't seen before, or can't fix themselves. They'll contact us and we'll research it and get a fix to them. "We have a remote capability where we can go and help them on board, and we also have an exact duplicate of the ISS network here on Earth. That way we can mock up what's happening on board the Station and take a look at our products down here to see if we experience the same issue on the ground."

The ISS is still being built — what does the future hold for its IT network?

"As we add modules and add capabilities on the orbit, our network is going to expand into those modules, whether that's adding more routers or adding more wireless access points. And every couple of years we'll take a look at advances in technology for both applications and hardware, to see how we can apply that to the network. For the most part with the laptops, we don't have to change them. They already do everything we need them to do, so you might only see a new laptop going on board every four years."