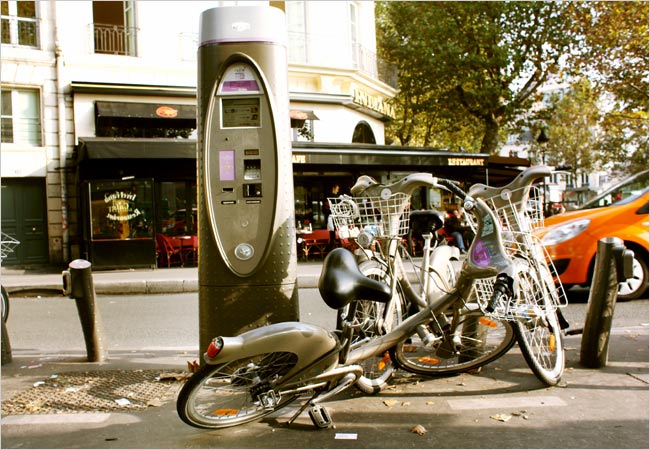 We've already covered the problems confronting the bike-sharing program in Paris — and what lessons it has for other cities — but yesterday a piece in the New York Times provided a theory as to why up to 80 percent of the program's 20,600 bicycles are stolen or damaged: social inequality.

The heavy, sandy-bronze Vélib’ bicycles are seen as an accoutrement of the “bobos,” or “bourgeois-bohèmes,” the trendy urban middle class, and they stir resentment and covetousness. They are often being vandalized in a socially divided Paris by resentful, angry or anarchic youth, the police and sociologists say.

Bruno Marzloff, a sociologist who specializes in transportation, said, “One must relate this to other incivilities, and especially the burning of cars,” referring to gangs of immigrant youths burning cars during riots in the suburbs in 2005. He said he believed there was social revolt behind Vélib’ vandalism, especially for suburban residents, many of them poor immigrants who feel excluded from the glamorous side of Paris.

“It is an outcry, a form of rebellion; this violence is not gratuitous,” Mr. Marzloff said. “There is an element of negligence that means, ‘We don’t have the right to mobility like other people, to get to Paris it’s a huge pain, we don’t have cars, and when we do, it’s too expensive and too far.’ ”

The bikes, by the way, cost $3,500 each. That's a nice bike. I've seen bike sharing in other cities that made use of beaters that seemed to work just fine.

Aside from the vandalism of these stylish and expensive bikes, however, the Vélib’ program is a huge success: "daily use averages 50,000 to 150,000 trips, depending on the season, and the bicycles have proved to be a hit with tourists, who help power the economy." It's worth noting that the comments on the Times article are filled with personal testimonies as to the ease and convenience of the program in Paris as well as other cities.

For this reason, perhaps, the vandalism seems to cause many commentators special pain.

Marzloff's inequality explanation makes intuitive sense to me — and it's supported by a rather large amount of research that shows social and economic inequality undermines social trust. The decline of trust in American society tracks very closely to the rise of inequality–and worldwide, unequal societies are also distrusting ones. Without trust, people don't share.

This is a major impediment to building a sharing movement in America. As with most of the countries of Europe, France is actually a much more equal society than is the United States.

"Since the end of the 1970s, the United States has seen a dramatic increase in economic inequality," says a new report from the Center for Economic and Policy Research. "While the United States has long been among the most unequal of the world’s rich economies, the economic and social upheaval that began in the 1970s was a striking departure from the movement toward greater equality that began in the Great Depression, continued through World War II, and was a central feature of the first 30 years of the postwar period. This is not due to chance circumstances but is the direct result of a set of policies designed first and foremost to increase inequality."

Here's a graph showing the share of U.S. wealth owned by the top one percent of income earners: Note the sag in the middle: Sharing the wealth correlates with prosperous periods in American history; inequality correlates with depressions and recessions — and it's a major obstacle to building a more shareable society.