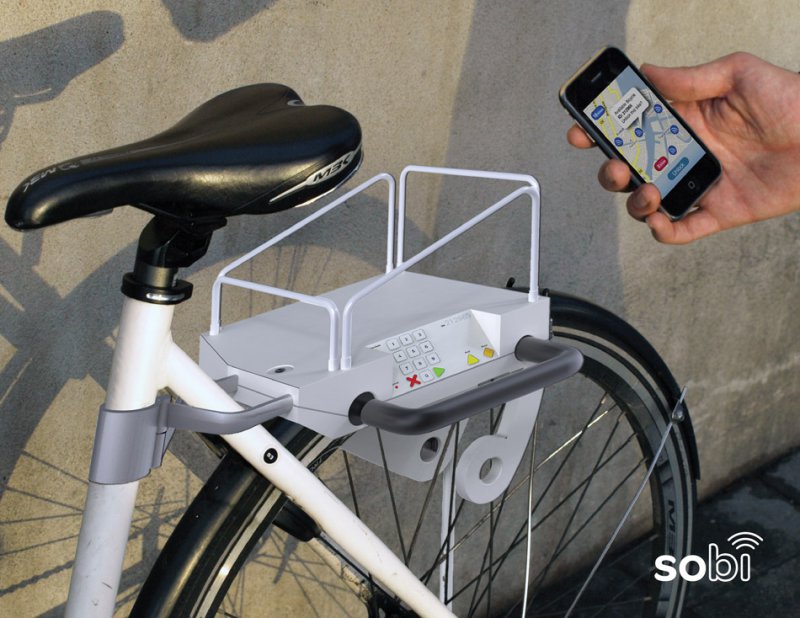 This morning I talked with Ryan Rzepecki about his revolutionary Social Bicycles System, or SoBi for short. To understand the significance of SoBi (which we've mentioned before) you might read Paul DeMaio's "Does Bikesharing Have a Future?" which describes the technological evolution of bikesharing from easy-to-steal "White Bikes" on the streets of Amsterdam to "third generation" systems that rely on GPS to track a kiosk-based fleet. With each technological advance, bikesharing programs have spread, and SoBi could potentially bring bikesharing to many more cities and towns. Here are three interlocking ways that SoBi could transform the future of bikesharing:

1. It embeds the infrastructure in the bicycles themselves: Instead of relying on kiosks and docking stations to connect users to bikes, cyclists use their smartphones to locate, check out, and lock bikes–everything is portable, wireless, decentralized, and self-contained. The tech is stored in a small "lock box" attached to the rear wheel, which connects the bike to a central server. Users create an account with SoBi, find a bike through a call or smartphone app, and receive a code which they can use to unlock the bicycle from an ordinary rack. They can just enter their account info directly into the lock box; they use the same pin code every time, "just like with a bank card."

In other words, you could find a SoBi bike at any rack in your city, and just grab one. Next month, Rzepecki and his partners will launch a hub in New York City with twenty bicycles. This is strictly a beta test designed to get working prototypes in the streets and test the lock, usability, and the tracking device. However, Rzepecki aims to uncouple access to the bikes from hubs like the one they'll need for the beta test.

2. It unleashes the potential for DIY bikesharing: Contrary to what's been implied by some reports on the SoBi launch, the beta test is being conducted without the cooperation of city government. While Rzepecki hasn't ultimately settled on a location in NYC, it will likely be on private property, possibly as an arrangement with a specific workplace.

This is quite exciting to us at Shareable.net, because third generation bikesharing systems have tended to start big and expensive. Take the master-planned Velib’ system in Paris: The 20,000 bikes cost $3,500 each, and upkeep for the system's network of 1,800 stations is reportedly very expensive. The Paris approach does have its benefits: The city is investing millions of Euros to remake itself as a bike-friendly environment, putting in dozens of kilometers of bike lanes to accommodate the increase in traffic. Hard to fault. But we in America have a lot of trouble with Paris-style urban re-engineering; instead, we tend towards sprawl and cacophony. It's in the margins and cracks of that sprawl that people take action, developing experimental grassroots programs that have the potential to scale up, which is how recycling programs developed in the United States.

If proven, SoBi could provide a plug-and-play bikesharing system for workplaces, community centers, neighborhoods, schools, and other places where people gather, as well as for entire cities and smaller towns. It will be easier for people to initiate their own bikesharing programs, and to experiment with the ways they are organized. I should note that while I like the DIY potential of the system, Rzepecki doesn't see community start-ups as the ideal scenario for his business. "Community bike share using a DIY approach is certainly feasible, but we do hope to work with governments and universities to implement the systems at a larger scale," he says. "Right now we don't have an agreement with the City for the demo, but that could change in the next few months after we display the prototype."

3. It dramatically lowers barriers to entry: On that note, the SoBi System could make bikesharing a practical option for many places that couldn't otherwise afford it. “All those docking stations and kiosks are very, very expensive," says Rzepecki. "You need two docking stations for every bike, so there’s enough room for the bikes to circulate." So, for example, the Velib’ system in Paris needs 40,000 spots for its 20,000 bikes. SoBi cuts that in half; because the most important infrastructure is in the SoBi lock box, each bike needs just one place to park for storage and repairs. When not at a station, you can lock or find a SoBi bike at any rack.

But even more critically, says Rzepecki, SoBi doesn't require that cities buy customized bikes that each run into the thousands of dollars, as in Paris. Instead, cities (and others interested in launching bikesharing programs) "can choose a bike that fits their budget" and then give each one a SoBi lock box. He estimates that a city-wide SoBi System would cost one-third less than existing systems, with a great deal of budgetary wiggle room.

After the beta test in NYC in 2010, Rzepecki hopes for a full-scale deployment in 2011, probably at a university. Want to know more? You can email ryan@socialbicycles.com.