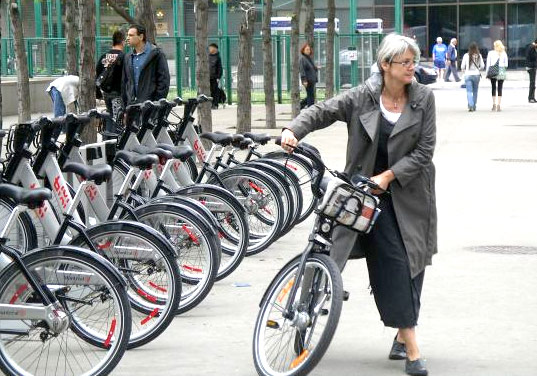 Yuka Yoneda has a great little piece at Inhabitat about bike sharing in Paris. The Vélib’ system is the largest bikesharing program in the world–and one of the easiest to use. For just €1 a day, you can grab a set of wheels at one of Paris's many stations. When finished, you just drop the the bike off at any station in the city. Voila!

But Paris still suffers the tragedies of the commons:

Numerous media outlets have reported about Vélib’’s theft and vandalism woes. Bikes have been mangled, hung from trees and even tossed into the Seine. There are complaints from motorists in the area that cyclists who use the bike-sharing program tend to be inexperienced riders and do not follow the traffic rules. Upkeep of the infrastructure (think 20,000 bicycles and 1,450 stations with roughly one station every 300 meters throughout the city center) is yet another headache to deal with. From the sharer’s point of view, the most common frustration is riding to a station hoping to park their bike there and finding no open spots – imagine you’re running late for an appointment?

Fortunately, lessons learned in places like Paris are providing solutions to other cities as they adopt their own bikesharing programs:

Boston, which is currently planning its very own version with the help of the Public Bike System Company, which oversees Montreal’s BIXI system and was also chosen to work on London’s upcoming program, has studied up on the downfalls of earlier operations. Some of the solutions include a stolen-bike alert system using online social media networks and a web service that allows users to see how many bikes and parking spots are available at any given station ahead of time. The fact that PBSC’s bike stations are portable, modular and solar-powered also alleviates much of the heartache that comes with the maintenance issues.

Incidentally, the fact that Boston is setting up its own bike-sharing system astonishes me. I biked around Boston–including from Jamaica Plain to Somerville–for five years, and it was an apeshit crazy, life-threatening experience.

Perhaps for that reason, Boston has a ferocious biking community, part counterculture and part advocate, that includes radical, shareable institutions like Bikes Not Bombs and Broadway Bicycle School, where my wife worked for many years as a collective member and mechanic. If Boston is moving to bikesharing, it's the result of years of hard work by these grassroots activists–people like you!

Assembly Required: One Peace at a Time from Bikes Not Bombs on Vimeo.