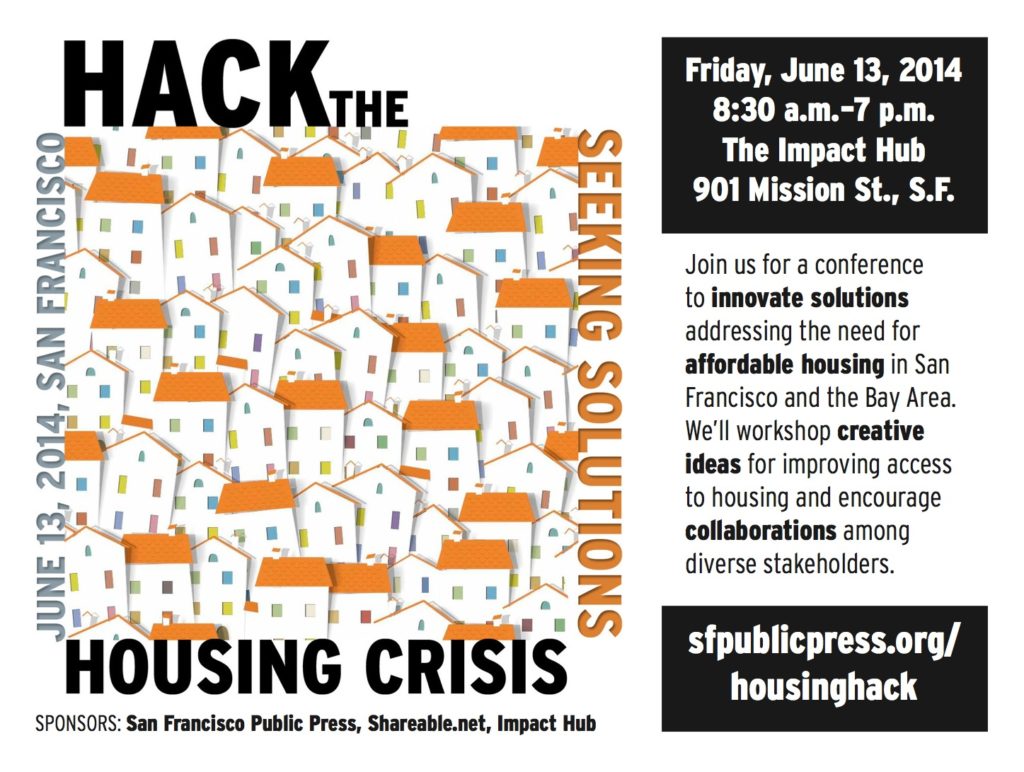 For the month of June, Shareable and San Francisco Public Press will explore housing solutions through an innovative partnership featuring a co-produced editorial series and solutions-focused event called, “Hack the Housing Crisis” on June 13th in San Francisco.

Much of the exploration will focus on San Francisco. However, as San Francisco has become the most expensive housing market in the United States, it’s arguably a proxy for what’s happened to or is coming for other cities in the U.S. and beyond. Shareable will contribute a broader perspective kicking off our contributions to the series with a feature story exploring how Vienna, Austria and Singapore have had success with affordable housing.

Shareable is focusing on the housing crisis this month because it’s where the failure of the free market literally hits home, it's a key issue for cities in our Sharing Cities Network, and the housing crisis is becoming more acute every day. San Francisco is a perfect example of the latter:

This said, the crisis is far from a San Francisco thing. Recently David Boyle, a fellow at the New Economics Foundation, said that soaring UK home prices “will kill off the middle class within 30 years.” This is a global problem, but also highly personal for those who are driven out and those who remain. From what I have seen in San Francisco first hand, David Boyle’s prediction seems almost tame. As the stats show, the middle class is already well on its way out of San Francisco.

And I’ve lost many neighbors to the crisis. They simply couldn’t afford to live in the San Francisco Bay Area anymore. For many of those left, they’re increasingly unable to devote time and money to the art and civic projects that in the past made San Francisco a remarkable place to live.

I feel these losses every day. The love I’ve had for my adopted hometown fades with every departure, with every broken link in a once robust civic ecosystem. It breaks my heart that the place where I was able to reinvent myself, where I was able to find love, community, acceptance, where I was able to create a new way to life based on sharing and find other crazy people to go on the adventure with me, is literally closing down as a space for personal and collective transformation. That’s what made San Francisco special for me. And the heartbreaking part is that others will be denied experiences that literally saved my life.

We the people face a grim future if we don’t wake the problem and implement new and proven solutions through our own initiative as well as government. What’s at stake is nothing less than our individual freedom, the vibrancy of civil society, and the integrity of our governments. Without affordable housing, we become ever more focused on earning money in the market economy. Our participation in civil society fades. And the tiny few that benefit from rising housing costs become even more powerful in government, often working diligently against affordable housing.

I hope through this exploration you become more informed. You may also come to see housing in a new light, but that depends on how good a job we do and how open you are to seeing the housing problem fresh. Which brings me to this disclosure. While San Francisco Public Press is taking the position of a neutral facilitator of discussion, we at Shareable have a distinct point of view you should know up front. We see housing as not just about places to live, but as a platform for participation in society. As such, it should be a human right, not a privilege only for those who can afford it.

I hope you’ll follow along (#HousingHack on Twitter), share our stories, join the dialog, disagree, put forward your own ideas, share ideas from other places, and most importantly, get the conversation going in your community. Below are key stories in the series: