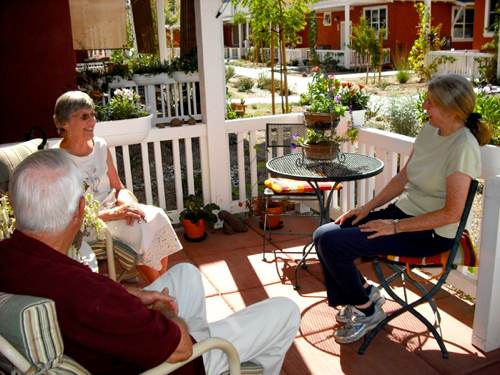 They’re supposed to be the golden years; a time of happiness and prosperity. But for many seniors, the post-retirement years are not so golden. Many live in isolation, watching their abilities, well-being and independence slowly dwindle away to the point where, after a lifetime of self-determination, they’re in the dreaded position of being a burden. It’s an image that fuels many a sleepless night.

In a time of sweeping funding cuts to senior services—the recent federal budget belt-tightening cut 23.5 percent from the Community Development Block Grants program which funds many senior programs—the message is becoming clear that we need to take aging into our own hands. And we’d better hurry because the number of seniors is about to skyrocket. According to the U.S. Census Bureau, in 1990 there were 31 million Americans over 65. In 2009 there were 39 million. By 2050, the senior population is expected to double to 79 million, which raises the question: if we can’t afford to support seniors now, what will we do then?

The good news is that this way of thinking (and aging) is quickly becoming a thing of the past. Aging is transforming into something that looks a lot less bleak and a lot more golden. Seniors are looking to themselves and each other to create networks of mutual well-being, support and friendship; transforming aging from a slow march to the grave into a joyful, community affair. 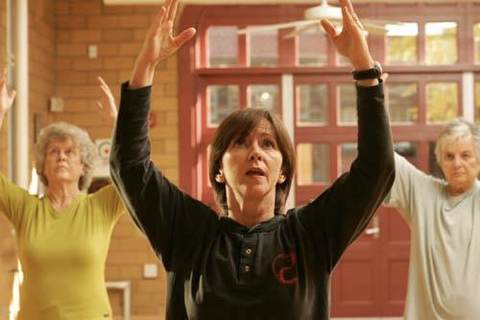 It Takes a Village

In the late 1990s, a group of friends in Boston realized that if they didn’t take their senior years into their own hands, somebody else would. “I never wanted to go to a retirement community,” says Susan McWhinney-Morse. “I call it warehousing the elderly. And there were a lot of people who felt the same way; that if we don’t do anything, there won’t be anything for us.”

McWhinney-Morse and her like-minded friends brainstormed creative ways that they could stay in their homes and continue to be active participants in life. They spent two years talking to service providers about everything they could possibly need, organizing their ideas into plans and laying the foundation for what would become the first senior community of its kind, Boston’s Beacon Hill Village. “The idea began to form that everything we need in our older lives is here,” says McWhinney-Morse. “The question is how to put it together in a way that is manageable. We decided that we would become consolidators of services.”

The concept of a village is simple, practical and visionary. For an annual membership fee that averages about $600 per person (with discounted fees for lower income individuals), members are able to stay in their own homes, living their lives as they see fit as part of an extended network that provides social events, meet-ups, discussion groups, fitness classes, field trips and more. Unlike other social organizations, villages take the notion of independence and security to the next level and provide members with a phone number for everything they could possible need that they can’t manage on their own. Whether they need a ride to the grocery store, someone to change a light-bulb, a plumber, help with paperwork, a daily check-in, help navigating the world of service providers or anything else, members can call the village. 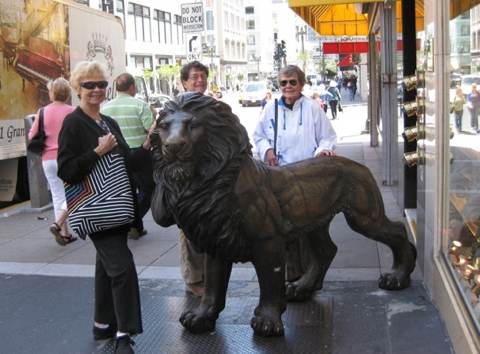 Villages provide access to just about anything their members may need. They pre-screen vendors, organize volunteers, arrange group discounts and manage appointments and bill-pay for those who have concerns about money matters. They are member-driven in their approach (members-helping-members is a big part of village life) and hold the vision of connecting trusted service providers with seniors looking to age safely and happily in their homes.

“Members tell us when we’re doing everything right and when we’re not,” says Vickie Epstein, the Program Director at Avenidas Village in Palo Alto, Calif. “This is all about them and how they want the village to look and feel,” she continues. “We are there for them whatever the issue is, be it small, medium or substantial.”

“I came from a small town, where most of the people knew me and my parents,” says Dorothy Batt, a member of SAIL (Supporting Active Independent Lives), a village in Madison, Wisc. “If I needed something, I knew who to go to. Retirement is like a foreign country, where you don’t really know the rules,” she continues. “SAIL has been a godsend.”

Steadily growing in popularity, villages are popping up all over the country and now number over 60 with 600 more in the works. As funding for senior centers and senior services goes the way of the chopping block, community-minded villages have created a new model for aging that relies on good, old-fashioned community to enrich the lives of seniors, putting to rest many of the concerns of members and their families alike.

“Once you retire, you can see a little bit down the road and it’s like being in a boat,” says Batt’s husband Jim. “When you’re working there are a lot of ports that you can travel to. But when you retire, you’re looking for a place that you can put into and have some security.”

“People are excited and want to move to where villages are,” says Rita Kostiuk, National Coordinator for the Village to Village Network, an organization that provides resources, support, ideas and best-practices to villages at all stages of development. “I think [the village] benefits the whole person; mind, body and soul. As we educate the federal government on how well it’s working, we’ll start seeing even more.” 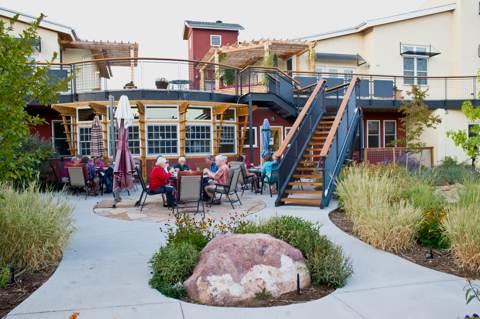 Bringing the notion of community living home, a concept known as cohousing is emerging as a cost-effective way to create lives of sharing and connectedness. Cohousing originated in the 1960s in Denmark, and was brought to the U.S. by Charles Durrett, who observed while studying in Copenhagen the communities created through cohousing..

“On my walk to the train station every morning and afternoon I noticed that there was no life in a lot of the buildings. Then there was this cluster of houses that people seemed to know each other and would sit down and have a cup of tea and a conversation,” he says. “People would come and go from this building that apparently no one lived [in] but everyone lived [in].”

Durrett had stumbled upon cohousing: a collaborative living arrangement in which a cluster of individually owned homes are centered around common areas, with residents actively creating and participating in all aspects of community life and where the security and connectedness that spring out of community living are held in the highest regard. Each individual house has all the amenities of home, but the common areas also have full kitchens and gathering areas for get-togethers (both planned and spontaneous) and regular group meals, which are a central part of cohousing life. Unlike members of a commune, the residents do not have a shared economy or set of beliefs. Cohousing communities thrive on diversity.

Cohousing has become a way for people to bring the warmth and sense of connectedness of neighborhoods and small towns into what has become increasingly isolating modern-day life. And while intergenerationalism is a key element of the cohousing concept, senior cohousing has emerged as an affordable and life-affirming way to age at home. The natural communities that are created with cohousing provide a sense of belonging, safety and fun that elders living alone or in institutions generally don’t enjoy.

Durrett, who authored The Senior Cohousing Handbook has, along with his wife and architectural partner Kathryn McCamant, consulted on the design of over 50 cohousing communities. He explains that seniors are also drawn to the smaller footprint that cohousing leaves on the planet. “You have one of a lot of things [like lawnmowers] instead of 20 of a lot of things,” he says. He also points out that the keys to a longer and healthier life, which include staying active and staying connected, are a natural extension of cohousing.

With nearly 120 cohousing communities around the U.S. with hundreds more in development, and thousands of communities worldwide (including hundreds of senior communities), cohousing is a practical and fast-growing model for what aging at home and in community can look like. 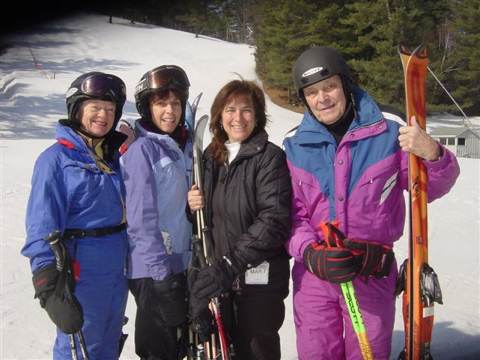 The good news is that a growing number of today’s seniors have set a plan into motion and provided us with a new vision of aging. And the even better news is that the boomers are coming, and they have never been content to simply accept what is handed to them.

“I think it can only get better as the boomers age,” says Jim Batt. “They’re more skilled at making a community than any generation.” Then he adds with a laugh, “Even though the changes in music weren’t welcome by me, I recognize the contributions of that particular generation and see that they will be carried forward into the future.”

And in the End

While villages and cohousing provide a much-improved model of what aging can look like, there will always be individuals who need more care and medical assistance than either of these options can provide. But being part of a community of support means that difficult decisions about end-of-life care don’t have to be made alone.

“We’re going to be here for you as needed, and when that time comes to find another level of care, we’re here for you then, too,” says Epstein.

“Senior cohousing always plans a common caregiver,” says Durrett. “An hour or half an hour a day; whatever is needed.” And if and when more care is needed, cohousing provides a built-in community of concerned, committed and creative problem-solvers to figure out the next step.

The idea of aging in community feels to me like a breath of fresh air and presents a very welcome alternative to senior isolation or institutionalization. Whether or not this model is a good fit for you and yours, one thing is certain: we can all rest a little easier knowing that there are more options for healthy and happy aging than ever before, thanks to a handful of thoughtful, committed people who are changing the world and showing us how to age gracefully together.