Aging in Community: Inside the Senior Cohousing Movement - Shareable
Skip to content 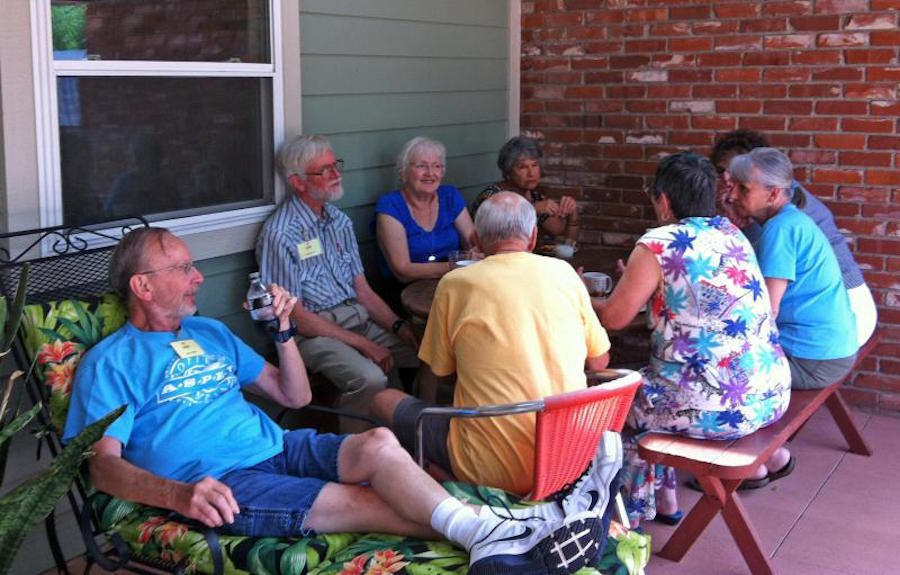 For seniors who want to age in a supportive community environment, cohousing is an exciting alternative to traditional options such as retirement homes and assisted living centers. In senior cohousing spaces, rather than relying on administrators, people rely on each other to lend a hand when needed and provide much-needed social engagement.

We recently connected with Anne P. Glass, professor and gerontology program coordinator at the University of North Carolina, Wilmington, about the current state of senior cohousing. Glass, who has researched the topic of senior cohousing for the past decade, shared her thoughts about why the senior cohousing model is so appealing, what senior social networks look like in practice, and why we need to get rid of ageist stereotypes.

Cat Johnson: When I wrote about senior cohousing for Shareable in 2011, there were around 120 cohousing communities total in the U.S. What has happened since then, especially in regards to senior cohousing?

Anne P. Glass: One of the first senior, or elder cohousing, was in the late part of 2005. In 2006, the elder cohousing movement officially began. There are still only a dozen or so in the U.S., but there are at least a dozen more in the planning or development stages.

It was already much further developed in countries like the Netherlands, Denmark, and Sweden, although they might call it different things — like in Sweden they call it collaborative housing, and it might be an apartment building, for example. It looks a little bit different, but it’s still the same idea. It’s still the idea of older people developing a sense of community, running the place themselves, and having the interest in connecting with each other.

In addition to providing a social network, cohousing is a way for seniors to take care of each other, which is an area of particular interest to you. How do you see this working out in cohousing communities?

If you move into a cohousing community, you would know all your neighbors — an average of 25-30 people — you would pretty much know everybody within 24-48 hours, so that’s already a big difference.

There’s a lot of security in being part of a community like that because you know people are looking out for you. People are not all going to love each other equally, but there is something going on where people are looking out for each other. That’s wonderful because more people are living alone and the term “elder orphan” is being used more and more. This kind of housing situation could work really well for people who are lonely and isolated, as well as for couples and friends. 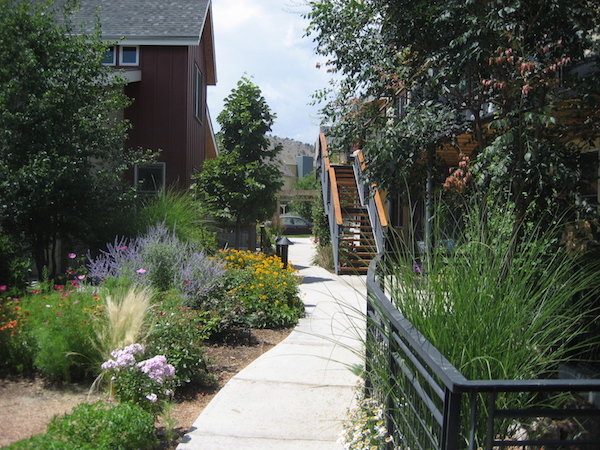 You mentioned that, unlike ageist societal stereotypes of older adults as dependent and needy, many older people are quite capable and willing to help each other. What does this look like on a day-to-day basis?

It turns out that a lot of help that older people really need is neighborly help rather than skilled care, per se. Some communities have assigned one or two coordinators, one of the other neighbors, for each person. So, if I go into the hospital, my coordinator would work with the other folks in the community to help me meet whatever needs I have. That may be that I want people to visit at hospital, or visit me at home when I come home, or I’d like to have a meal brought over, or I need someone to walk my dog. Things like that can go on for a few weeks afterwards.

I like it because it means that if you’re the person that has fallen or ended up in the hospital or has some other illness, it doesn’t fall on you to have to beg your neighbors to help you out, you can have your coordinator coordinate it for you.

I think the beauty and strength of collaborative communities like this is that people can build them and create them as they see fit.

It’s very clear from the interviews I’ve done with people who have organized these communities is that it’s an exciting thing to be part of the creation. I see these people as pioneers because this is a new thing in our country, and it’s different from other senior living arrangements because the people who live there run it themselves — they don’t have an administrator, [and] they don’t have a service staff. They really do rely on each other.

It seems that a lot of cohousing communities here are cost-prohibitive. Do you think we’ll start to see more affordable cohousing solutions?

There is one elder cohousing community that, from the beginning, they wanted to make it affordable and target it for low-and-moderate-income folks. It’s a unique model because it has both rental and owner units in the same community. The rental units have an income subsidy connected with them. The good side of that is that it does make it affordable, but the complicated side is that, because of fair housing and such, people can move in if they meet the criteria without really buying into the community and taking a role in that. If you have too many people who aren’t buying into being part of the community, that kind of defeats the purpose.

I’ve seen cohousing communities that people have moved out of because there wasn’t that strong community angle that they were looking for.

Of the communities I’ve visited, some are in the stage of having to figure out how to integrate newcomers. The founders all came in together and got everything going and decided everything, then when new people come in, they want to also have their say, so that’s a challenge that they’re still grappling with.

That is not unique to cohousing communities, I’ve heard people in retirement communities as well talking about the how the older generations and younger generations want to do things differently, so there’s a little bit of tension around that. It’s also the case with cohousing that, if you are going to be fully engaged, you do have to put the time and effort and work in, so it’s not going to be for everybody. 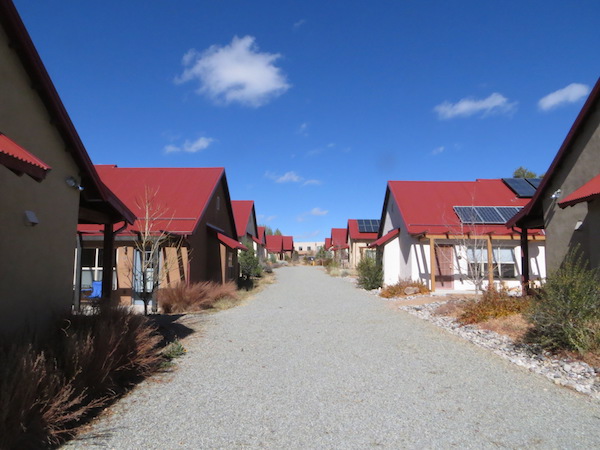 What are some of the differences you see in senior cohousing communities in Sweden, Denmark, and the Netherlands, and what can we learn?

There are a lot more communities, like in the hundreds, of elder collaborative housing. In Sweden and the Netherlands, some of the ones I visited were apartment-type living, but in Denmark, the community I visited was more like what we’ve come to think of cohousing here, with the units around the common space. There’s definitely interest in cohousing and it’s growing around the world. There’s interest in Spain and in Asia, and the U.K.

One woman I interviewed said she moved in because she said she didn’t want to die in her apartment and be found a few days later. So it’s being part of a community, and having people looking out for you. Not only would they notice if you didn’t come out of your house all day, but more subtle things of just looking out for each other.

My article "Aging Better Together" explains my thinking on that and some of the outcomes of it. It has to do with the idea that we’re aging together, in solidarity, and we’re willing to talk about it and we can have a better experience by doing it together. To promote social contact is the whole idea of it.

The idea of giving people a space to talk about aging is interesting. What more can you tell me about that?

One of the things that came out of the research is what I talk about as aging literacy. We don’t give people an opportunity to talk about what it’s like to be aging. If we have an event for older people, it’s usually a healthcare expo where we’re selling services, not the kind of opportunity or forum for people to come together.

One woman I interviewed said she felt differently when she got into her eighties, and she wanted to get a group together to discuss if they felt differently about life when they got into their eighties. That’s the kind of thing I’m talking about — much deeper and richer conversations. We don’t have that. Even in retirement communities where you have a lot of older people living together, they have activities, but I don’t think they have many opportunities to have those deep discussions.

What do these cohousing communities have in common? How do they differ?

For the most part, the founders of these communities really are looking to create something new — a new alternative. They want the sense of community. It turns out that even people who are introverted are choosing cohousing. They realize that their tendency would be to become a hermit. They realize it’s important to have connections and that it was easier to do it this way and have people right outside your door that you could go to the movies with. They saw that there were advantages to it.

There’s more and more evidence that shows that social isolation can be as bad for elders as smoking and lack of exercise. It’s becoming realized as a public health issue. Having those connections is vitally important.

I’ve read that elders in urban centers tend to live longer than elders in suburbs because they can get out and go to the bodega or walk to the park and be among people.

That’s absolutely been recognized as an issue. When the Baby Boomers, of which I am one, when we were children, everybody wanted to live in the suburbs because it was supposed to be good for your children to have a yard and a place for them to play, so everybody moved to the suburbs. Now that everybody is aging in the suburbs, it’s not a great location to be, especially when you get to where you can’t drive anymore. The people who live in more urban settings, where there’s a lot within walking distance, can be at a much better advantage.

In our society, we value independence so much, that people have to do everything for themselves, but I would argue that, as we get older, being interdependent is what we should strive for.

This Q&A has been edited for length and clarity. Top photo: Oakcreek Community in Stillwater, Oklahoma.