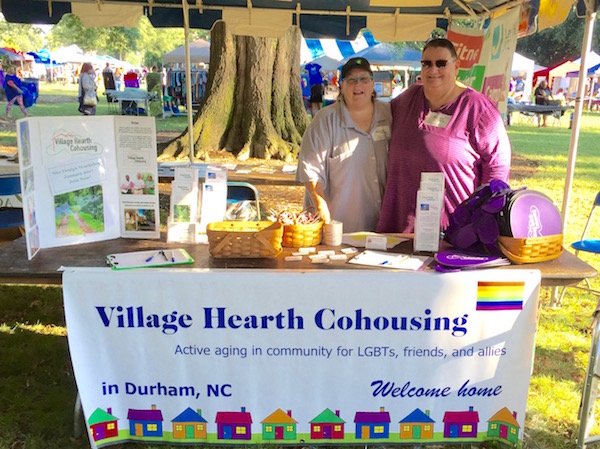 Cat Johnson|February 21, 2017
After spending time with friends in a house at the beach, Pat McAulay and her spouse Margaret Roesch wondered whether they should all consider living together when they retired. The two quickly realized that living under the same roof might be a bit too close for comfort, but that cohousing — housing communities often based around common interests — might be just the thing.
The couple from Durham, North Carolina, looked at existing cohousing communities but found that many of them were two-story homes that wouldn't work well for seniors. They also had concerns about being the only gay couple in an existing community. So they took matters into their own hands and got to work on creating Village Hearth, a cohousing community for LGBTQ seniors in Durham.
"It was always being pointed out to us that [cohousing communities] have a nice lesbian couple, or a nice gay couple," says McAulay. "We didn't want to be the token lesbian couple. That's not to say anything bad about another community, but we felt, as [Baby] Boomers, that we needed to stick together and have a place where we could be comfortable being ourselves."
MaAulay says that her generation worked hard to come out of the closet but now that they're older, some LGBTQ seniors joining nursing homes and assisted living centers feel like they have to go back in the closet to be safe.
After attending a regional cohousing conference in Boulder, Colorado, McAulay and Roesch started talking to friends about the project. In August of 2015, they found a property. That's when "things started getting real and people started getting on-board in earnest," says McAulay.
Village Hearth will be accessible, with paved pathways and in close proximity to single-story homes and other buildings. It will have universal design features, including wide hallways and thresholds, and different height counters in the common house kitchen.
These things "don't get in our way if we don't need them," says McAulay, "but they're there if we do." It will also be built sustainably, with a focus on being light on the land, with the building being "as green as [we] can afford."
To keep the project on-track, McAulay and Roesch have enlisted the help of cohousing pioneers Kathryn McCamant and Charles Durrett of McCamant & Durrett Architects. The two have helped them navigate the steps to building the project from the ground up. The Village Hearth community is now waiting for approval from the planning commission. Next, they'll go before city council to get approval. At this point, nine of the planned 28-32 members' houses have committed. They expect to begin construction this year and move in next year.
As far as McAulay and Roesch know, Village Hearth is the first and only LGBTQ cohousing community in the U.S. The irony that it's located in North Carolina, where lawmakers passed House Bill 2 (HB2), the controversial legislation that prevents transgender people from using bathrooms in public buildings corresponding to the gender with which they identify, is not lost on the two. But they love Durham, they feel safe in the city, and their new neighbors have been welcoming.
"We let the neighbors know we were looking at building there," says McAulay. "We've had a half a dozen emails from people and they all have said, 'Welcome to the neighborhood.'"
Just in their sixties, McAulay and Roesch want to create a home they can age into right now, rather than wait until one of them needs it.
"Our idea is, we want to get this all set up and in-place so we don't want to even have to think about it," says Roesch. "We don't want someone having to make a decision in a crisis, which is what happens when someone is living in their home then all of a sudden they can't. People don't think they're going to age, or they don't think they're going to age very fast."
There are plans for Village Hearth to have a caregiver suite in the common house and to leverage the community's numbers to combine healthcare services. For instance, they're exploring the idea of having a doctor visit once a week or once a month. They'd also like to have other healthcare providers like physical therapists and podiatrists visit weekly.
One of the most important things about a supportive senior community is simply ensuring frequent interactions among neighbors. McAulay and Roesch wrote in an e-mail:

People enter into cohousing with the intent of being good neighbors…[W]e will be our own best safeguards against loneliness and isolation. We're not promising nursing care or long term aid in ADLs [activities of daily living], but we'll notice if someone doesn't open their blinds or starts to slip. We can [pitch in] with shopping and meals for the short term, but most importantly, we'll be present. Present when one has no one else; present to listen or to hold a hand. This is the kind of community we aim to create.

For the couple, being able to age and die at home is important.
"We don't want to get caught up in the medical model at the end of life, and spend all that money, all that angst in the last days," says McAulay. "We're going to be as creative as we can in order to make that happen for people."
Header photo of Margaret Roesch and Pat McAulay at Durham's 2016 Pride Celebration. Follow @CatJohnson on Twitter