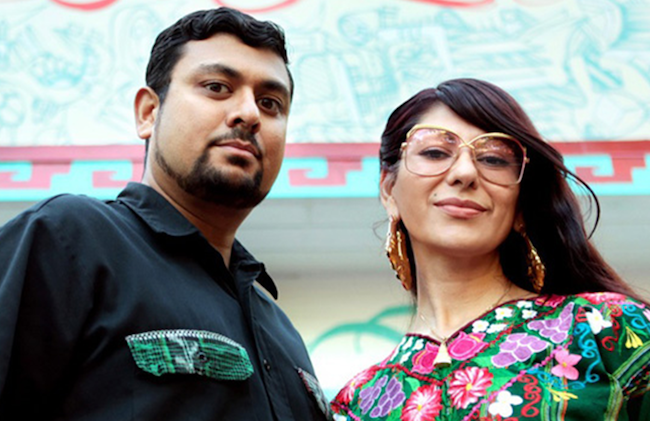 The Sol Collective Arts and Cultural Center is a 3,200 square-foot space that straddles the border between Land Park and Curtis Park neighborhoods in Sacramento, California. Since the nonprofit was co-founded in 2005 by Estella Sanchez, a former teacher, it has hosted a number of art exhibits, community workshops, youth programs, and other events. The collective recently held an Open Mic, Open Jam hosted by musician, poet, writer, and film editor Andru Defeye and a circle singing event led by Hannah Gladstone, both of which were free and open to the public.

What started as a small project has turned into a local institution — one that not only has provided numerous opportunities to local artists and activists, but has helped develop the local economy. It is one of many burgeoning art co-ops in Northern California, including the La Pena Cultural Center in Berkeley, the Convent Arts Collective in San Francisco, and the Temescal Arts Center in Oakland.

Sol Collective brings both the artist and activist communities together to collaborate on ideas and projects. In the past year, the space has hosted a wide array of concerts, films, poetry readings, open mic events, activism classes, health workshops, art exhibitions, social fundraisers, religious and cultural ceremonies, music performances, showcases, and theater performances. We spoke with Sanchez to learn about what makes Sol Collective so special, and how she plans to continue bringing the artist and activist communities together in Sacramento and beyond for years to come.

Nithin Coca: Can you tell me a bit about your model – what kind of collective is Sol Collective, and how are you officially setup?

Estella Sanchez: It really evolved organically. We've been around as a collective for 12 years and have been figuring it out as we go along. But we knew we didn't want to be an individual business, we didn't want to be a regular nonprofit organization. It's a work of progress, and it seems like an ongoing experiment to figure out how to do this kind of work as a collective.

Our legal structure is setup as a 501(c)3 nonprofit organization. We have a variety of board members. The majority of our executive board members are from an education background — teachers, those affiliated with universities. Our community advisory board is a mix of different people from the community working in the arts, education, social justice, and activism. And then we have a a youth board, with a mix of young people interested in arts, social justice, activism, and community engagement. In a traditional nonprofit, usually only the executive board has voting power, but at our meetings, people sometimes forget what board they're on because everyone can vote.

What would you say is unique, or special, about Sol Collective? Can you tell me a bit about your members?

New people are always coming in, and it's a very diverse and intergenerational team that makes make up the collective and the various boards. We have elders in the community who can share their knowledge and experiences, and we have young people who are emergent leaders. Everyone is contributing something different, whether its knowledge, wisdom, social media. They are the "soul" of Sol Collective.

Our model is set to that we have programing that is relevant to the community, led by people coming out of the community who maybe need a team to help construct a program, or a space to do this. A few years ago a student, Ruby Avila, who was very interested in food justice, and had questions why, for example, organic food wasn't available in her community, came to our space. She… created a garden of organic food — fast forward a few years later — she's still here, and still working around food justice issues. She created a lot of the food network programming at Sol Collective.

Another one we had an elder in community, Trudy Robles, who was very interested in working around… Mexican Curanderismo, traditional, holistic care, and started these classes for practitioners. That program is now it in its seventh year, and actually has become a regional program, working with traditional practitioners and healers to share knowledge when they traveling through the Southwest or Mexico. She is a now an advisory board member.

Another example, Salvin Chahal came in as a high school student wanted to provide space specifically for South Asian youth who were interested in the arts — create a couple different events, became a part of our advisory board, and now he is working on our team and he is actually running our Sol Life Media platform as a creative director. Just graduated from College — and he's gotten international support for South Asian arts, from as far as Toronto.

What does Sol Collective bring to the larger community in Sacramento and beyond? How does it benefit local economic development?

We try to create a space to generate local income. We have a local mercado, or store called Global Local Mercado, and one of things that we try to do is we feature art and work from local and global artisans. So we carry a lot of members works — painters, authors, ceramics, artwork — we also… feature work from other collectives. We currently have a project with a 170 indigenous family collective in Oaxaca — artisans that do leather, leatherworks, traditional textiles, wood carvings, jewelry. One of the missions of their collective is to find a way to maintain their traditional way of life and the value of artisans, which they were starting lose after generation.

There is a stigma around being a street vendor in Mexico so they were looking for ways to take the selling off the street, so we work directly with them to carry a lot of their products within Sol, and promote the idea of artisans and the mission of makers as a way of life.

With our local community — we try to help raise awareness of the work that goes into… creating a product. Such as the idea of slow fashion, we try to communicate with our community about where their products are coming from and the benefits of a local and local-global economy and knowing where your things are coming from. Our store embodies the work of global to local artisans focused on sustaining and sharing culture through art, clothing, and accessories.

How do you share your knowledge, model, and learnings with other collectives? Can you tell me a bit about your network as well?

There was no one really doing what we were doing 12 years ago. There was no blueprint for what we were doing. The idea of an arts collective? I didn't ever hear about that. Now, I feel like everytime I go on social media, I hear about a new collective. It is important to share. We learned a lot while setting up our structure, and when we hit our ten-year mark, we really felt that we needed to start sharing what we had learned. We had been sharing organically throughout the years, but in these last few years we've been working on developing some type of written or online model we can share with… other organizations or collectives. What's worked, what hasn't worked, the type of programming that we have, etc.

A lot of other collectives have started and used our model, such as one in Sonoma. More and more, groups that saw our work and wanted to something similar in their cities reached out to us. We have a strong relationship with the collective in Oaxaca and have done cultural exchanges with them. We also worked with a collective in Staten Island who wanted to do a event called Global is Local so we gave them seed funding to sponsor that event there. We also did a community mapping project at South By Southwest in Austin, Texas, and it was really a way to find other like minded groups doing similar work.

How have you been able to survive and thrive for 12 years? how do you plan to help ensure Sol Collective is sustainable in the future?

We've been around for 12 years, and during that time, we've seen a lot of organizations and businesses come and go in our community. So it great for us to not only still be around, but thriving.

Part of the reason that the organization has survived and thrived over the years is that we've remained fluid and flexible. Everyone [on our boards] is open to hear and support others who are part of the collective. It may not be something they are 100 percent behind, but if someone else in the collective is passionate about it and believe in that work, they will support it. It's an open and supportive group of people with different interests that come together and work very well.

I feel like, on our boards, everyone loves each other. There's really this collective feel between everyone where one feels like we're all part of this together. We just purchased our building, and that means we, as an organization, will be there long term, even after the founders of the collective are gone.