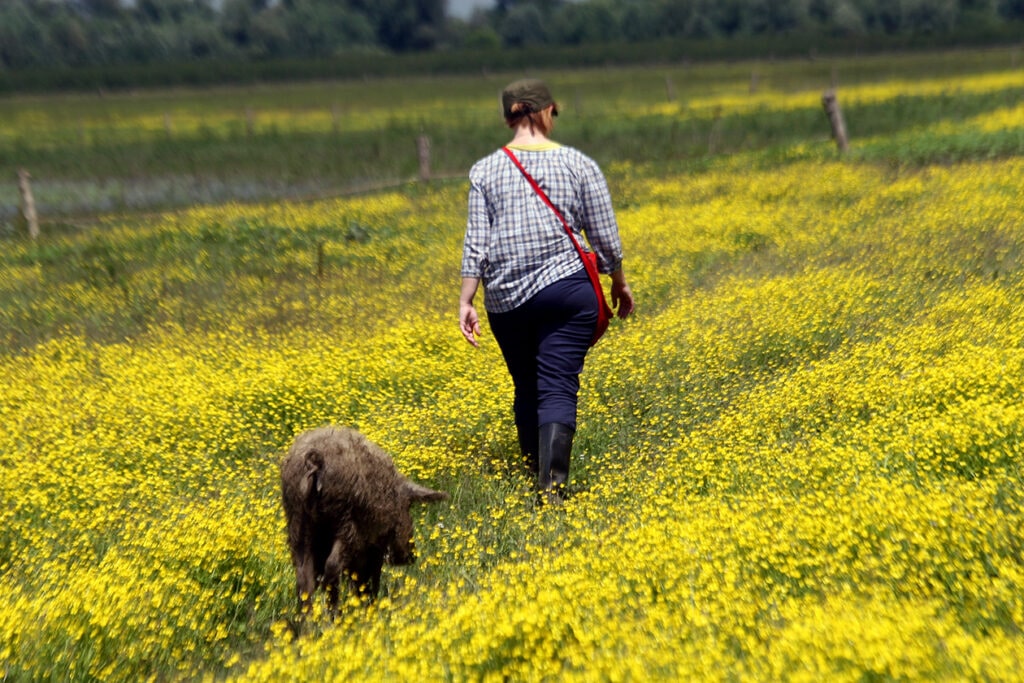 In an idyllic pasture on the banks of the Sava river in Eastern Croatia, a pastoral collective is stewarding the land to increase biodiversity.

“I grew up on this pasture,” says Šimo Beneš, a retired medical doctor and the president of the Brod Ecological Society (BED). “In my childhood, people mainly kept cows, even traditional breed, Podolian cattle. They don’t give milk, so with time they almost perished since already then they have not been used as working animals. Other cattle also decreased and with time, (and about) 30 years ago, an invasive plant species, Amorpha Fruticosa, started taking over. Nothing grows under this bush and this is a big problem in fluvial areas like ours. We saw that the pasture is going to die if we don’t do something.” BED is an environmental nonprofit that began to register pastoral communities.

Two decades ago, organizers engaged people from two nearby villages — Oprisavci and Poljanci — and bought new cattle from EU funds. Today, the pasturing community Gajna comprises 17 agricultural families that together have over 170 cattle units, and some horses, pigs, and geese.  There is a communal farm and the pasture has no fences or other obstacles, so animals roam freely.

Traditional cattle breeds are generally the best to hinder invasive species because they are adapted to the local climate, are heat and cold tolerant, and spend the whole year on the pasture. When the river Sava floods the pasture, the cattle are moved to the hilly areas. They also have a barn with open doors for shelter.

Today, Gajna is an oasis of biological diversity. Herons, storks and other wetland birds enjoy the ponds, and 250 plant species can be found there, including human food, such as mulberry trees. Gajna also serves as a natural hatchery for Sava River fish. The health of the pasture demonstrates why this old way of managing natural resources is worth investigating.

“Traditionally, this type of pastures has been seen as a natural resource used under some written or unwritten rules. Historically it was often less-fertile land that was being used in this way. Our pasture is an area that is regularly flooded and the whole ecosystem is tightly connected with both animal breeding and river dynamics,” says Iris Beneš, program coordinator and Šimo’s daughter.

Today this type of common management of natural resources is rare. BED took two decades to motivate people and reinvent a model for how to include this type of governance in existing national and international laws and systems.

Nonprofits like BED are well-placed because they work with local people as well as on the international level with other local communities and indigenous peoples’ organizations to develop common governance values and raise public awareness of direct democracy, sustainability, participation, and responsibility.

Iris said Europe had a patchwork of laws governing collective land, or the commons. “Commonage in the Anglo-Saxon countries is different from that in the Mediterranean countries and a special set of problems plagues those common lands that somehow managed to survive the socialist and communist regimes because mostly the state took formal ownership. In European policies, this problem is almost invisible but there are initiatives that work together to lobby in this field and point out that a collective approach to agricultural land management in (the) European Union is not only more efficient but ultimately the only possible,” Iris said.