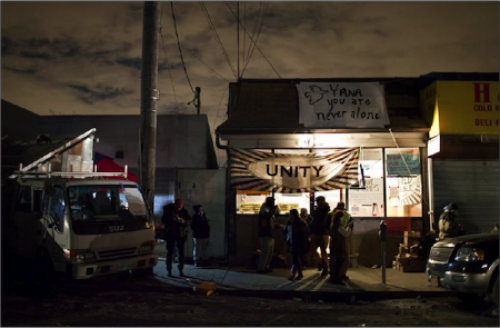 In late October 2012, a worker training center opened its doors in the Rockaway Park area of Queens, New York. It was called YANA, or "You are never alone." The center, a collaborative effort of several community-centered organizations, wanted to bring jobs, education and environmentally-sustainable practices to a region already hurting from economic marginalization. Then, things got complicated.

Just two weeks after the grand opening, Hurricane Sandy made landfall on America's East coast. The furious storm flooded vast portions of New York and New Jersey, destroying homes, starting fires, and knocking out the power for millions. The Rockaways community saw some of the worst carnage, with almost 1,000 homes damaged beyond repair. The YANA center was hit badly. But instead of abandoning it in search of higher, dryer ground, the center's volunteers temporarily changed their mission, and got to work. 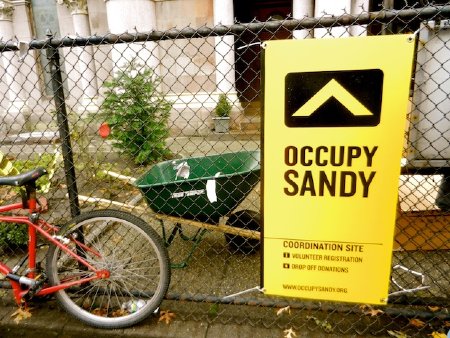 Almost immediately, YANA reopened its doors with the assistance of Occupy Sandy volunteers and solar power provided by Greenpeace and became a hub of community recovery, mutual aid and solidarity.

Despite being housed in a badly damaged building, YANA and its volunteers have provided hot meals, free medical treatment and legal counseling, acting as a donation distribution site and even training and dispatching canvassers and construction/demolition crews throughout the peninsula.

“The community has been very grateful to YANA for its relief hub efforts,” said Occupy Sandy organizer Sarah Baxendall. “Before the storm the neighborhood was less connected, now it’s more connected. Official agencies have donated lots of supplies and have been trained by our crew. FEMA especially. Sadly, the Red Cross has been very absent in this neighborhood.”

Bolstered by the Occupy Sandy matra of "mutual aid, not charity," YANA and its supporting organizations have launched an ongoing crowdfunding campaign to rebuild the center  as a living, breathing example of the sustainable practices it hoped to teach the community.

Thanks to funds contributed by supporters all over the country, YANA volunteers recently announced that the first phase of rebuilding the center is finally complete. On Friday January 11th, volunteers poured a new concrete floor, working late into the night to make sure there was a wheelchair ramp built before it set and dried. 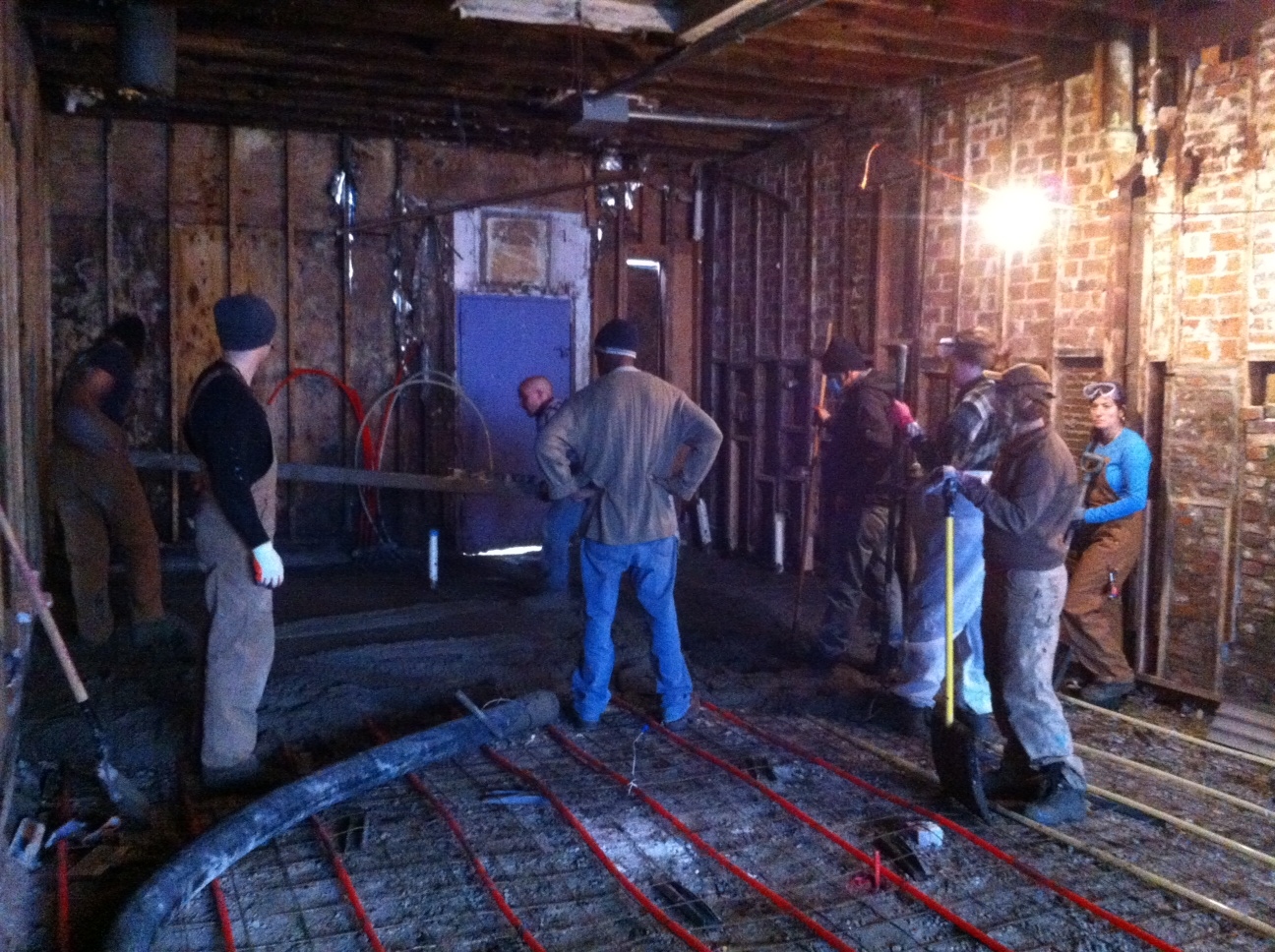 The floor is functional and beautiful, dyed with mineral pigments in deep reds and browns to match the unfinished brick wall. The hydronic (hot water) radiant heating system supplies heat directly to the floor through a series of pipes laid under the concrete. This system uses very little energy — the thermal radiation warms every object with which it comes into contact so it limits heat transfer and breaks the constant heating and cooling cycle of traditional heating systems. 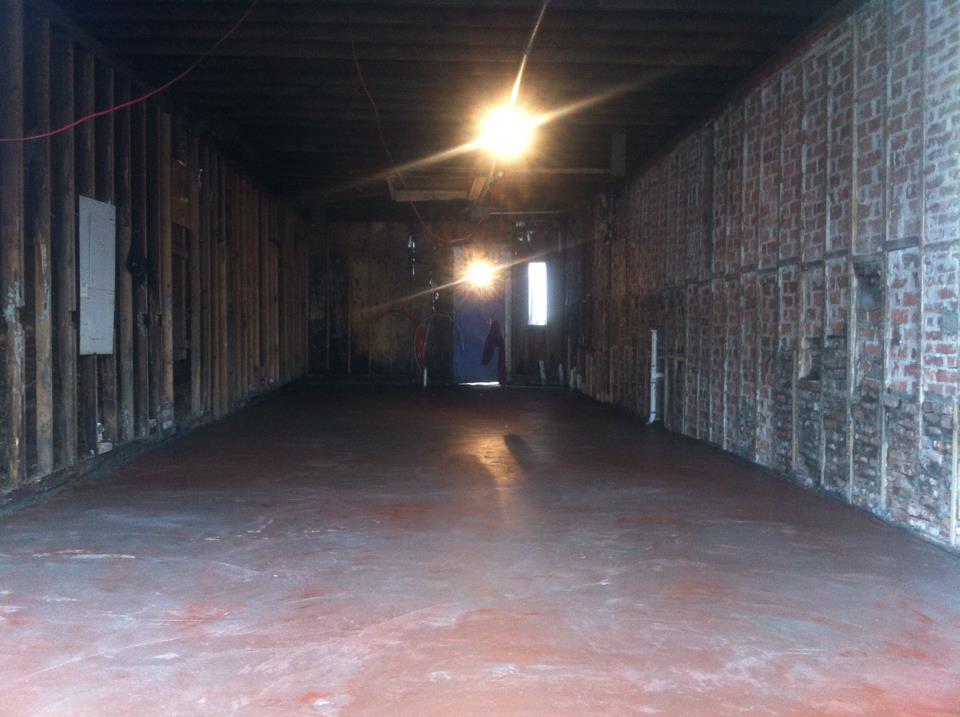 Through the love and support of community, YANA is literally being rebuilt from the ground up. But the work has only just begun. Even if you don't live anywhere near New York, you can help spread the word about this project and ensure that YANA is a permanent fixture in the Rockaways for years to come.

1. Check out the project’s donation page on WePay. No contribution is too small to support this revolutionary mutual aid effort. Just $5 helps to purchase plants for YANA’s green roof, while $10 helps buy supplies for eco-friendly bioremediation. The campaign has no deadline, so you can donate at any time.

2. If you live in the area, or are willing to make the trip, YANA is open every day except Mondays and can put any volunteer to good use. Address is B113th St. & Rockaway Beach Boulevard. Bring boots and warm clothes.

3. Spread the word about YANA and Occupy Sandy among your social circles. Like or tweet about the crowdfunding effort directly from this page, or like YANA on Facebook to keep up with their progress.